Just four days before the official sale of the UFC was announced, Conor McGregor applied to register three trademarks.

Conroy, who recently posted about McGregor's application to the Irish Patents Office, notes that it's altogether more likely that the reigning UFC featherweight champion realised that it would be worthwhile to protect his brand due to the possibility that any image rights owned by the UFC, and therefore sold to the new owners, would be affected following the sale.

On 7 July McGregor, through his company McGregor Sports and Entertainment Limited, filed for three trademarks - 'The Notorious', 'Conor McGregor' and 'The Mac Life'. 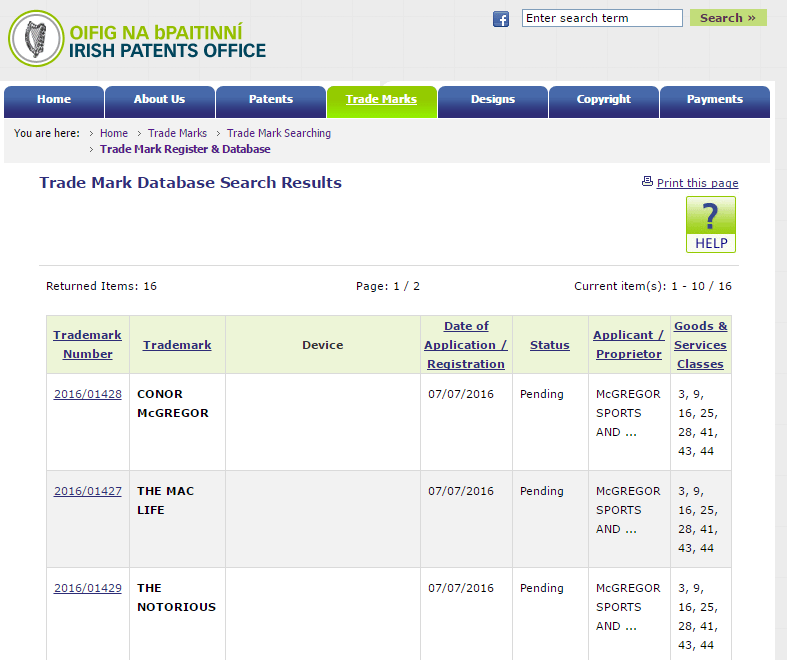 Conroy points out that while the initial applications are for Ireland only, it's very possible that those will act as the foundation for applications on an international level.

It will take at least three months for these three trademarks to be processed and accepted presuming no objections, which is an optimistic presumption. 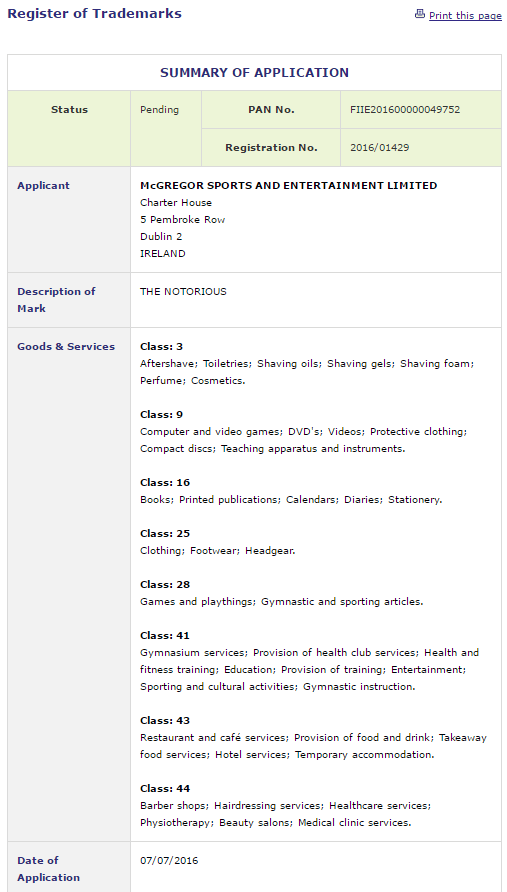 END_OF_DOCUMENT_TOKEN_TO_BE_REPLACED

Conroy mentions one quite close to home, with The Grafton Barber's recent application for a 'The Notorious' trademark, which has not yet been accepted.

It seems rather odd that a businessman as shrewd as McGregor would wait so long to apply for these trademarks but perhaps the Irishman's new website - TheMacLife.com - signalled that it may be time to start putting the stamp on his intellectual property.

We don't expect an application for 'Red Panty Night' to be too far down the line.


popular
"I never really cried or got emotional over what I've done as an individual. I couldn't give a s***"
"I was off the grid" - Aidan O'Shea respond's to Mayo criticism after club championship win
"If I break my wrist, it's on f***ing both of you." - Koepka and Berger act the spoiled child
'I won The Open by six shots in my home country, but this was the best week of my golfing career'
The FootballJOE Pub Quiz: Week 7
Final Ryder Cup player ratings a tough read for some Team Europe big guns
"I told him the absolute truth" - Sergio Garcia on his Ryder Cup talk with Rory McIlroy
You may also like
2 months ago
UFC appears to have signed a new Irish fighter
2 months ago
Conor McGregor labelled an 'easy payday' who can't compete with top UFC fighters anymore
2 months ago
Khabib says McGregor is "finished" as Dos Anjos makes his play
2 months ago
Shocking post-fight footage shows McGregor threat that upset Poirier so much
2 months ago
Conor McGregor posts first Instagram since last night's defeat
3 months ago
"Can't wait to shut this ***** up" - UFC knock-out monster signs on to box Jake Paul
Next Page