Conor McGregor represented himself very well during return to 3Arena

Conor McGregor's appearance at BAMMA 35 went as well as could have been expected.

The last time Conor McGregor showed up at Dublin's 3Arena, his actions caused an absolute shitstorm. Leaping into the Bellator cage, shoving referee Marc Goddard and slapping a commission member was a really bad look for 'the Notorious'.

That memorable cameo meant that there was always going to be a lot of intrigue and tension surrounding his inevitable return to the venue. When he showed up to support his SBG teammates at BAMMA 35, there was always a worry that it was all going to kick off again.

SBG fighter Ion Pascu scored a unanimous decision victory over former BAMMA champion Alex Lohore in the main event. For the duration of the headliner, McGregor sat cageside chatting to a young fan. 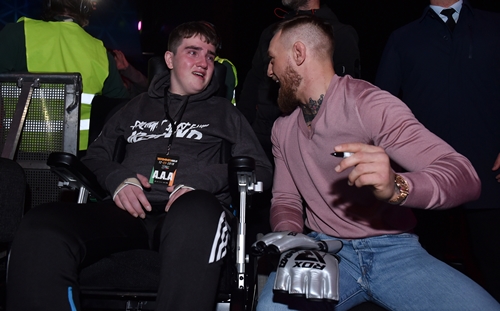 END_OF_DOCUMENT_TOKEN_TO_BE_REPLACED

McGregor explained in an Instagram post that he recognised 15-year-old Ian O'Connell from the Late Late Show. He admitted being blown away by his attitude towards life and how he has handled adversity in the moving post.

He singled out his quote, “If you can’t stand up, STAND OUT!” as something that really stood out to him.

McGregor watched on as teammate Blaine O'Driscoll scored a big win over Aaron Robinson on the preliminary card. The Dubliner secured a submission victory via rear-naked choke in the first round after scoring a flash KO in the opening exchanges.

Kiefer Crosbie, who also trains out of SBG, shone in the co-main event against Josh Plant. It was clear early on that the fight was going to last very long as both men went to war. The Dubliner did more damage on the feet and when Plant looked to secure a takedown, Crosbie unloaded a barrage of elbows to the Brit’s dome until the referee stopped the fight.

Highlights from the bloody brawl between Kiefer Crosbie and Josh Plant at #BAMMA35 pic.twitter.com/efv7xV9GGx

That's more like it from McGregor. Everyone saw his good side on Saturday night.


popular
World Cup 2022 Day 13: All the major action and talking points
Shay Given on how far Ireland could've gone at the 2002 World Cup with Roy Keane in the team
The SportsJOE Friday Pub quiz: Week 3
From Ireland to Argentina: Alexis Mac Allister's Irish roots explained
Ivan Rakitic criticised for alleged comments condemning 'gays, black people, dwarves and the obese'
Jack Grealish says he regrets his comments about Miguel Almiron
France demand FIFA change result of World Cup defeat over 'rule break'
You may also like
2 months ago
Hasbulla signs five year deal with UFC 'worth more than many fighters'
2 months ago
UFC fighter Elias Theodorou has died, aged just 34
2 months ago
John Kavanagh and Johnny Walker kicked out of T-Mobile Arena during UFC 279 main card
2 months ago
Conor McGregor took exception to one part of Nate Diaz victory speech
2 months ago
Nate Diaz and Tony Ferguson tossed together for UFC 279 main event after wild 24 hours
3 months ago
Your guide to a huge weekend of sport and how to watch it all
Next Page