Jon Jones may be the architect of his own demise, but that doesn't make the prospect of seeing his UFC tenure end prematurely any less tragic.

For the first time in a long time, it looked like the UFC were finally going to luck out with one of their most highly anticipated cards ever. Then everything went south fast.

Fortunately, Conor McGregor vs Nate Diaz II was scrapped from UFC 200's main event slot very early, meaning the UFC had a lot of time to find the fight that would serve as the maraschino atop the mouth-watering international fight week cake. With Jon Jones completing a successful return at UFC 197 following his year-long suspension, the promotion had a ready-made replacement with his highly-anticipated grudge match sequel against Daniel Cormier.

END_OF_DOCUMENT_TOKEN_TO_BE_REPLACED

The narrative was that Brock Lesnar would bring the eyes and Jones and Cormier would give these peepers something more refined to look at. Putting the light heavyweight title fight at the top of the bill would ensure that the casuals who stuck around after Lesnar's return would experience the combat game at its highest level, with the hope that this would be the first step on the path towards becoming fully-fledged MMA fans.

Fight fans know the heartbreak of losing high-profile fights all too well. With the seemingly increasing amount of headliners being postponed or cancelled entirely due to the injury curse, it felt very odd that there were no major withdrawals from UFC 200 heading towards the end of fight week.

As it turns out, that wonderful period of little drama was just the eye of the storm.

The sorry list of UFC main events cancelled over the past 12 months https://t.co/dvFJha5N38

END_OF_DOCUMENT_TOKEN_TO_BE_REPLACED

Three days before fight night, hours after the pre-fight press conference had gone down without a hitch, it emerged that Jones had failed a random drug test administered in June. And just like that, the main event was scrapped.

Jones was pulled from the card, Cormier was pushed further down the bill to face late replacement Anderson Silva in a non-title fight and the women's bantamweight title fight between Miesha Tate and Amanda Nunes was bumped up to the headline act.

Although Jones will have time to plead his case and he is innocent until proven otherwise, if he is found to have been guilty of using PEDs, it could potentially mean we have already seen the last of him inside the Octagon. What a tragic way for one of the sport's all-time greats to bow out. 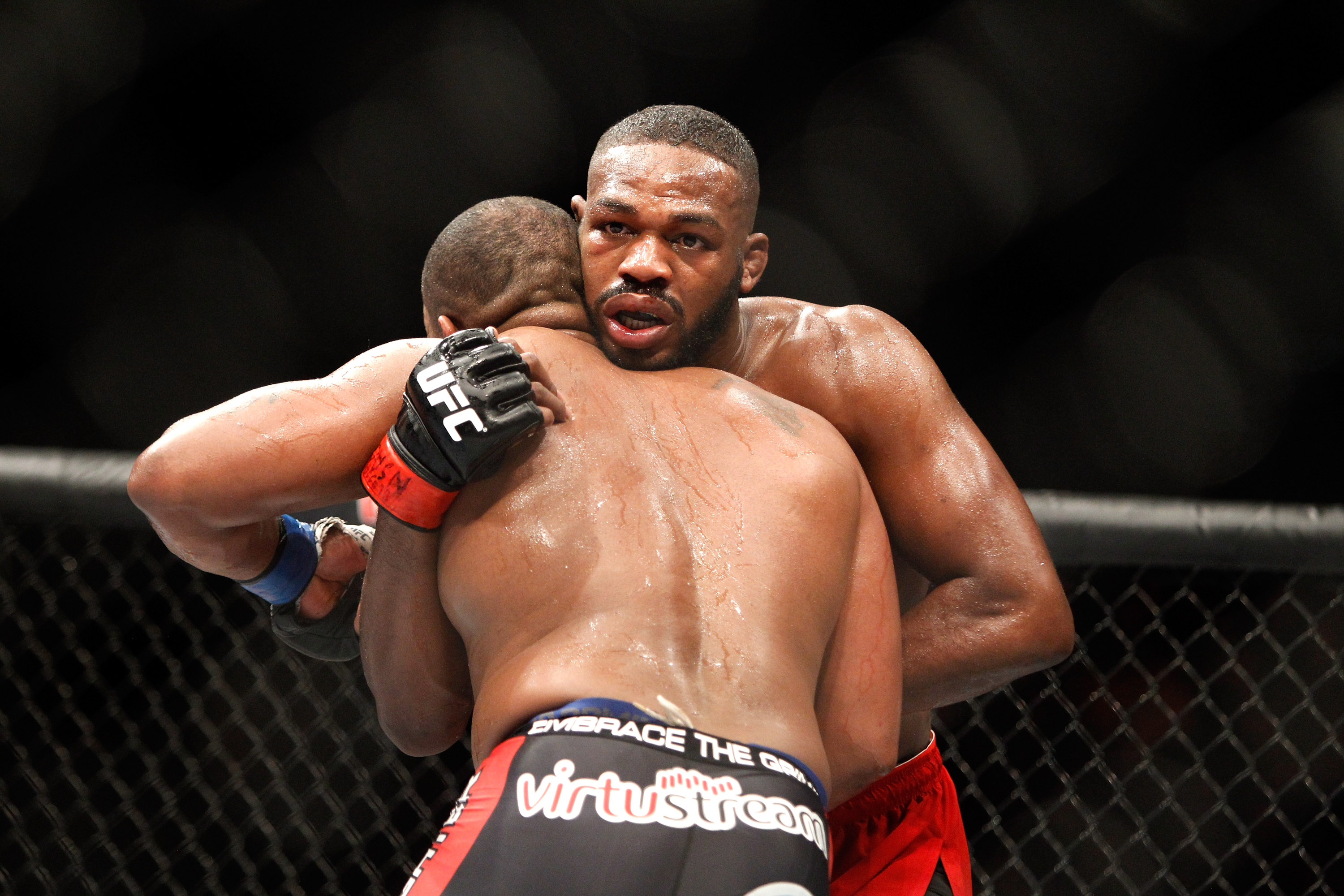 END_OF_DOCUMENT_TOKEN_TO_BE_REPLACED

The initial reaction to Jones getting popped was one of contempt and frustration towards the UFC star mixed with an air of inevitability due to his chequered past outside the cage. Considering he has been given so many chances to get his act together following a laundry list of controversies - including testing positive for cocaine metabolites and injuring a pregnant woman in a hit-and-run before fleeing the scene - the impact of Jones' potentially ending his UFC career in disgrace may have been mollified.

A quick glance at Jones will tell you that the man is genetically-engineered to fight. Having the wingspan of a condor coupled with the fight IQ to properly utilise it has allowed him to become one of the great innovators in combat sports. He has been given all the gifts necessary to become the greatest of all time, but he seems hell-bent on sabotaging this potential at every opportunity.

Every time he steps into the cage, he seems to show us something we've never seen before. Whether it was taking down Cormier several times, nearly ripping Glover Teixeira's shoulder from its socket in the clinch or going on an unprecedented run of dusting legend after legend after becoming the UFC's youngest ever champion, it seemed like there was no limit to what Jones could achieve inside the Octagon.

Jon Jones is out of UFC 200. He was looking to extend his win streak to 14 consecutive wins. pic.twitter.com/ZvxJMNpnpd

What he has done in what has historically been one of the promotion's most competitive divisions has already solidified his place in the greatest of all time discussions alongside the likes of Georges St-Pierre, Anderson Silva and Demetrious Johnson.

However, at just 28 years of age, the "what if" factor over whether we witnessed him reaching his full potential or not will leave an asterisk beside his name in the debate, if he were to leave the sport now. Judging by the reaction from Dana White, a guilty verdict could prove to be the coup de grace for his UFC tenure.

Jon Jones' troubled personal life is what has seen him rack up most of his column inches of late, and although this drama undoubtedly added to his drawing power because of this weird voyeur-like fascination society has with catastrophe, this was merely a sideshow to the main attraction - his exceptional abilities as a fighter.

You can point the finger of blame and say that he got what was coming to him, but the truth is the light heavyweight division doesn't shine as bright without its biggest star. It's not just Jones who would be a victim of his wrong-doings, but the fans would lose out too. We could be deprived of some world-class wars and some more wonderful moments of ingenuity, all because of a series of stupid decisions.

Seeing a true great who had it all, lost it all and failed to seize every opportunity to claim it all back would be a real tragedy.


popular
Roy Keane handled Gary Neville’s goal celebration as most Irish fans would
Roy Keane cracks up ITV pundits with description of Senegal supporters
World Cup 2022 Day 15: All the major action and talking points
Mauricio Pochettino on Kylian Mbappe and rumours that he's 'difficult'
Ronaldo finally reveals why he got that hideous haircut
Shay Given on how far Ireland could've gone at the 2002 World Cup with Roy Keane in the team
Tyson Fury and Derek Chisora eat Five Guys together after going to 'war'
You may also like
2 months ago
Hasbulla signs five year deal with UFC 'worth more than many fighters'
2 months ago
UFC fighter Elias Theodorou has died, aged just 34
2 months ago
John Kavanagh and Johnny Walker kicked out of T-Mobile Arena during UFC 279 main card
2 months ago
Conor McGregor took exception to one part of Nate Diaz victory speech
2 months ago
Nate Diaz and Tony Ferguson tossed together for UFC 279 main event after wild 24 hours
3 months ago
Your guide to a huge weekend of sport and how to watch it all
Next Page