Colby Covington dismantles Robbie Lawler before making fool of himself

The American attempted a UFC record of 533 strikes over five relentless rounds, took Lawler to the ground on 10 occasions [from 18 take-down attempts] and was the unanimous winner on all three judges' scorecards. 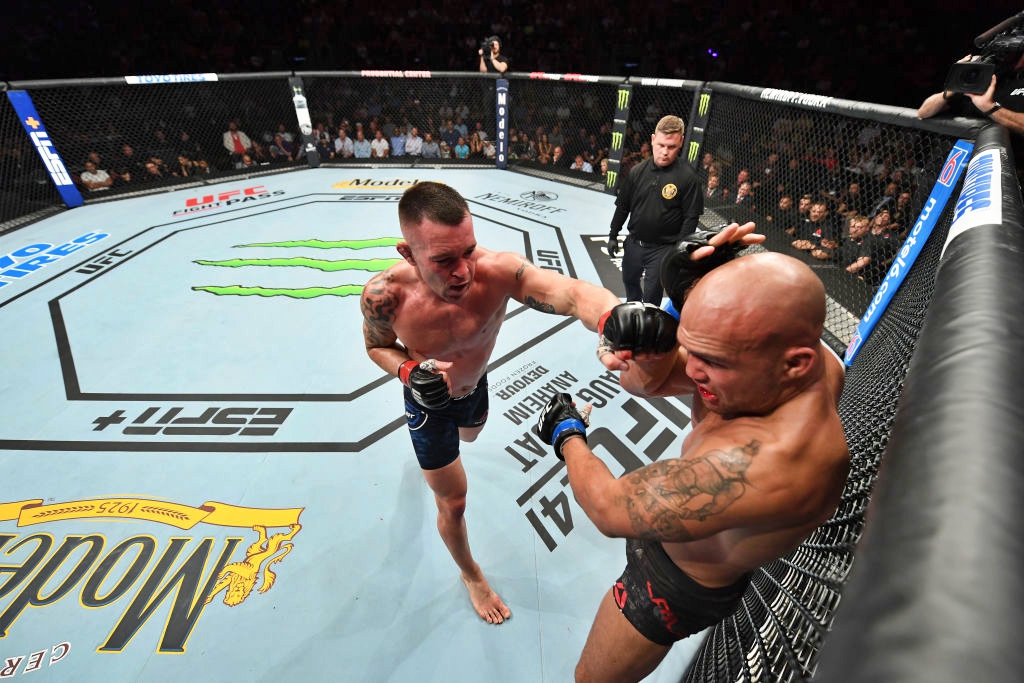 Covington connects with Lawler, up against the fence. (Photo by Josh Hedges/Zuffa LLC/Zuffa LLC via Getty Images)

END_OF_DOCUMENT_TOKEN_TO_BE_REPLACED

Lawler, a former welterweight champion, found himself 3-0 down after three rounds and tried to walk Covington down in the final stanzas only to be picked off with ease.

The impressive Covington victory sees him move to seven straight victories and drew strong reactions from the MMA community:

I want to apologize for losing bc now all of you have to listen to Marty and Colby talk to each other. It will be damn near unbearable.

END_OF_DOCUMENT_TOKEN_TO_BE_REPLACED

Covington demanded that his interim welterweight belt, which he was stripped of last year, be placed over his shoulder before and after his fight. Calling himself 'The People's Champion' and wearing a 'Make America Great Again' red cap, the 31-year-old claimed President Donald Trump's sons, Eric and Donald Jr., came to the Newark event just to see him.

While Lawler was nothing but gracious in defeat, Covington used his victory speech to make a disgraceful comment regarding former UFC star, and friend of Lawler, Matt Hughes. He declared:

"Let's talk about the lesson we learned tonight. It's a strong lesson that Robbie should have learned from his good buddy Matt Hughes - you stay off the tracks when the train is coming through, junior!

"Don't matter if this is the Trump Train or the Colby Train, get out of the way!"

Hughes, another former welterweight champion, was in a vehicle that was struck by a train in a near-fatal crash, in 2017. He was left with brain damage after the crash but pulled through after almost a month in a coma.

Colby Covington with a statement win against Robbie Lawler! 👏

"Don't matter if this is the Trump Train or the Colby Train, get out of the way!"

His post-fight interview almost as good as his performance! 🤣 pic.twitter.com/xsyW4PeK1D

Hughes responded to Covington's grim comments with a measured Instagram post. He stated, 'Not sure if Colby Covington should have used my accident as fuel for his post-fight trash talk, but that was one heck of a fight. Reminder though, this is the fighting world. People talk trash and you gotta have thick skin.'

Covington then moved on to Usman and the pair put on a painful 'He said, he said' exchange during a post-fight ESPN interview:

Colby: Let's do it right now.

Usman: Let's do it tonight.

Colby: Bring it on then.

Ben Askren owes us all another apology.

The victory for Covington does leave Jorge Masvidal - the other contender for Usman's belt - looking for another fight to keep him going. Masvidal declared, after knocking out Darren Till and Askren, that he wanted a title shot or a meeting with Conor McGregor. It may have to be the latter now.


popular
World Cup 2022 Day 14: All the major action and talking points
From Ireland to Argentina: Alexis Mac Allister's Irish roots explained
Shay Given on how far Ireland could've gone at the 2002 World Cup with Roy Keane in the team
Ronaldo finally reveals why he got that hideous haircut
The SportsJOE Friday Pub quiz: Week 3
After 18 years, one of the game's greatest stalwarts calls it a day
The story behind Nate Diaz's backstage scuffle with Clay Guida's team during UFC 199

You may also like
2 months ago
Hasbulla signs five year deal with UFC 'worth more than many fighters'
2 months ago
UFC fighter Elias Theodorou has died, aged just 34
2 months ago
John Kavanagh and Johnny Walker kicked out of T-Mobile Arena during UFC 279 main card
2 months ago
Conor McGregor took exception to one part of Nate Diaz victory speech
2 months ago
Nate Diaz and Tony Ferguson tossed together for UFC 279 main event after wild 24 hours
3 months ago
Your guide to a huge weekend of sport and how to watch it all
Next Page