At times, fighters need to look at MMA as an individual sport but at other times, they need a teammate's shoulder to cry on.

Saturday night had the potential to be an unforgettable one for Chris Weidman and Stephen Thompson.

The smile spread across Weidman's face as he made the walk to the Octagon in his native New York told viewers just how much the occasion meant to him. He started his middleweight meeting against Yoel Romero well but found himself on the receiving end of a thudding flying knee and there was no way back for the former 185lbs champion.

The defeat, the second in a row for Weidman who was undefeated before last December's loss to Luke Rockhold, clearly took its toll on Stephen Thompson, Weidman's training partner and close friend, who was set to compete just an hour later.

Thompson, whose brother is married to Weidman's sister, admitted that seeing his pal beaten so brutally played on his mind when he took to the Octagon for his welterweight title fight with Tyron Woodley.

END_OF_DOCUMENT_TOKEN_TO_BE_REPLACED

“I felt it, you know, my heart dropped," Thompson said in his post-fight press conference. "For something like that to happen to such a good guy, good friend, and now family member, it was... yeah it hurt me, man. It hurt me deep.”

'Wonderboy' didn't get his hand raised as the fight was declared a majority draw and both he and Weidman were inconsolable after a night that was supposed to end in glory finished in heartbreak.

Weidman's wife shared this stunning photograph as the men embraced in their locker room, knowing that only the other understood what each was going through. 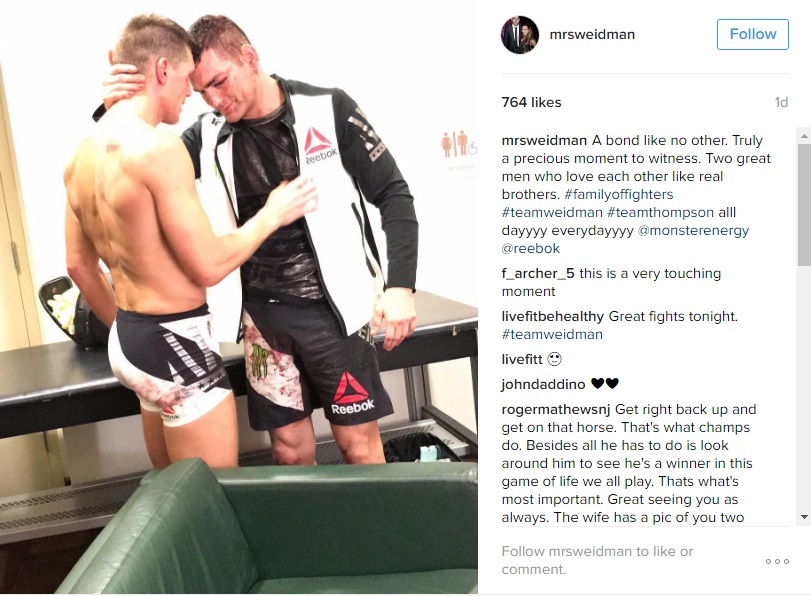 END_OF_DOCUMENT_TOKEN_TO_BE_REPLACED

Show this picture to the next uninformed individual that claims MMA is just a sport for heartless barbarians looking for an excuse to beat the tar out of someone.

Fighters are human beings. They have emotions.

And they're not afraid to show them when a friend needs a warm embrace if a fight doesn't play out in their favour.