There is a very noticeable trend with some of the recent high profile upsets in the UFC.

Whether it was Miesha Tate choking Holly Holm out, Stephen Thompson lighting Johny Hendricks up like a Christmas tree or Holm rendering Ronda Rousey unconscious with that seismic head kick, these fights that played out so differently share one commonality - the loser's strongest weapon was nullified.

Tate's lateral movement and wrestling prowess stopped Holm from getting her stand-up game going, Thompson's zippy blitzes meant we never got to see Hendricks' supposedly improved boxing and Holm's nimble footwork allowed her to evade the Rousey clinch that usually results in her opponent being thrown to the mat before having her arm nearly snapped in half.

END_OF_DOCUMENT_TOKEN_TO_BE_REPLACED

The same was the case for Nate Diaz's shock win over Conor McGregor at UFC 196. Usually when the Notorious lands with that patented Celtic cross, the poor unfortunate sod on the other end falls. That didn't happen against the Stockton native and there are a few reasons why. We won't get to all of them here, but we've highlighted a few of the key factors.

END_OF_DOCUMENT_TOKEN_TO_BE_REPLACED

In all of his UFC wins, apart from possibly the Max Holloway fight, McGregor has managed to infiltrate his opponent's mind and make him fight emotionally.

Joe Lauzon correctly pointed out in his eerily accurate prediction for the Diaz fight that a lot of this is smoke and mirrors. McGregor uses techniques such as the wheel kick much like a matador uses a red flag. These aren't necessarily thrown to land, but rather to cause aggressive fighters to rush in, overextend and while they're doing that McGregor has started to move out of danger and begun countering at will.

He tried this tactic against Diaz, but the stubborn curmudgeon refused to take the bait. When McGregor threw that inviting wheel kick in the first round, Diaz kept his composure, stayed out of striking range and continued the feeling out process.

END_OF_DOCUMENT_TOKEN_TO_BE_REPLACED

When breaking down a fight, it's important to pay attention to what the fighters have to say about what went down. This is particularly true of McGregor as he has a penchant for informing everyone in plain English what transpired inside the cage.

Here's the explanation he gave during the post-fight press conference when asked why Diaz was able to absorb his haymakers.

"I was simply inefficient with my energy. The weight allowed him to take those shots well."

"It was simply me fighting a heavier man and that's it." 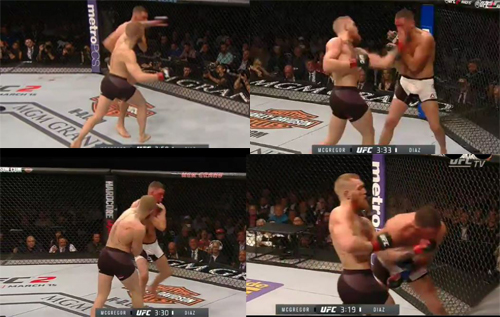 While the extra weight may have contributed to McGregor's punches not being as effective as usual, to say that it was the sole reason discredits one of Diaz's strongest weapons, his chin. In 29 professional fights, Diaz has only been knocked out once, and on that occasion it was a head kick from Josh Thomson that hit with enough force to level a small village.

Whenever Diaz fights, you expect him to take a certain amount of damage because he has an unnatural ability to eat shots.

The other natural gifts that Diaz has at his disposal is reach and cardio. McGregor gave up two inches in reach to the Stockton native and three inches in height which will give some indication why he only landed 40% of his strikes up top. This was the first time McGregor hasn't had a reach advantage over his opponent in the UFC and Diaz was able to make the most of it.

That triathlete engine meant he was able to constantly move out of range, keep firing with more volume and landing with greater frequency than the Notorious. He landed 77 of 152 significant strikes to McGregor's 61 of 140. He's genetically engineered for slug fests such as this.

3. He fought to finish, not to win

Diaz goaded him into a brawl without really forcing McGregor alter his modus operandi. McGregor came out swinging and tried to bury another cadaver under an arid blanket of Mojave sand and he expended a lot of energy trying to achieve this in the first round.

Despite his excellent head movement, Diaz is quite hittable and McGregor cracked him a few times in the fight. However, as we've already mentioned, the fact that he's got a bigger chin than Reese Witherspoon makes trying to knock him out a frustrating task. McGregor discovered this when his loaded up shots only resulted in more fatigue rather than another body lying prone on the canvas.

Discipline is required to beat an evasive brawler like Diaz. The GSP obsessive approach to winning at all costs is key when you're facing a guy who epitomises the "Kill or be Killed" attitude.

Rafael dos Anjos got a dominant decision victory over Diaz in December 2014 in a tactically perfect performance. He annihilated Diaz's lead leg with kicks to restrict his movement before shooting in for the takedown and unloading his vicious ground and pound. Just like the aforementioned upsets, he took Diaz out of his element, utilised his own strengths and got the victory.

If you attempt to let the leather fly and go head-hunting you'll probably end up disappointed with the result. That's what happened to Michael Johnson and it happened again with McGregor.

Diaz isn't just a genetic freak, he's also a highly skilled martial artist, with a black belt in Brazilian Jiu-Jitsu, and phenomenal boxing. When world champion pugilists such as Andre Ward are singing his praises, you know he's able to bang with the best of them.

It is arguable that the straight left that landed flush in the second round that rocked McGregor is the moment he knew he had him beaten, but that was merely the cherry on top of the tireless combinations he scored with throughout the fight.

Diaz has devoted the guts of two decades to Jiu-Jitsu and it has given him a high level of unconscious competence in locking in submissions. Essentially, he has the killer's mindset to go for the finish. but the natural instinct to perfectly execute it in autopilot mode. We saw that in the way he finished the fight.

IT'S ALL OVER!!!
Diaz submits @TheNotoriousMMA in Round 2! #UFC196 https://t.co/CAFnZzxXvq

There is a line in Michael Mann's neo-noir crime thriller Collateral that seems strangely applicable to UFC 196's main event.

"Now we gotta make the best of it, improvise, adapt to the environment, Darwin, shit happens, I Ching, whatever man, we gotta roll with it."

McGregor's gameplan was to knock Diaz out. When he realised this wasn't going to happen and Diaz stayed standing no matter what he threw at him, he didn't change tack. It may have been due to fatigue or his incredible self belief that has seen him become the biggest star in the sport, but when shit happened he didn't try to improvise.

We've seen McGregor improvise mid-fight in the UFC. After he tore his anterior cruciate ligament against Max Holloway, he adapted from a striking-heavy game and went for the takedown in the third round to seal the victory.

Obviously, taking a Brazilian Jiu-Jitsu black belt like Diaz would not have been the best idea, but it is perplexing why he didn't take on his corner's advice of not "loading too much on the left hand" and peppering his legs instead. McGregor had success with the leg kicks and oblique kicks early in the fight and considering how much damage RDA was able to inflict on Diaz's legs, it's surprising that he didn't attack the legs more.

Why McGregor didn't try to modify his game might remain a mystery, perhaps it was the pressure of being the headline act of a PPV, as the Holloway bout was before he exploded into this icon of the sport, and was given a preliminary card slot. Or maybe Diaz is just that good at luring people into a scrap.


popular
Sean Dyche set to be named Everton manager after Marcelo Bielsa talks break down
Roy Keane flatly rejects longstanding perception of ex-Man United midfielder Paul Ince
Allianz National Football League Round 1: All the action and talking points
Roy Keane leaves ITV pundits in stitches after Pep Guardiola's pre-match interview
Conor McGregor hit by car ‘at full speed’ while cycling
"I don't like to fill my time that way" - O'Hora going his own way in an era of obsessives and covering all bases
Replay is not the answer for Glen-Kilmacud mess of epic proportions
You may also like
1 month ago
Ariel Helwani shares Paddy Pimblett WhatsApp messages as spat becomes public
1 month ago
Conor McGregor savagely hits back at Joe Rogan following PED comments
2 months ago
"There’s a new Irish superstar in town" - Young Derry fighter touted for UFC after big title win
2 months ago
Conor McGregor almost unrecognisable after shaving off iconic beard
3 months ago
Dana White confirms Conor McGregor is not in the USADA testing pool
4 months ago
Hasbulla signs five year deal with UFC 'worth more than many fighters'
Next Page