If you're wondering why people rave about Conor McGregor's abilities as a promoter, look no further than the comments he made about Ali Abdelaziz at the UFC 229 press conference. No fighter in UFC history has done this amount of research into their shit talk. 'The Notorious' did some serious digging for what Dana White called, the darkest press conference I had ever been a part of'.

After doing the obligatory staredown with Nurmagomedov, McGregor went after Abdelaziz.

FYI, Noah is the son Ali abandoned in Colorado when he started as an informant for the NYPD and who he is $50k behind in child support for. @TheNotoriousMMA does his homework when preparing for war.

Abdelaziz revealed to Anatomy of a Fighter what he said to cause such a strong reaction from McGregor.

END_OF_DOCUMENT_TOKEN_TO_BE_REPLACED

This appears to be partially true. Although Abdelaziz was a little more harsh in his tone. You can hear him faintly say in the official clip,

"Get that shit out of here," before the audio trails off.

END_OF_DOCUMENT_TOKEN_TO_BE_REPLACED

Once McGregor starts spitting venom with his acerbic tongue, he could be heard responding with a few 'Fuck you's. Dana White, who had just warned the media to stop antagonising the fighters, shook his head. A grimace washed over the UFC president's face as he gestured to Abdelaziz to get out of there. 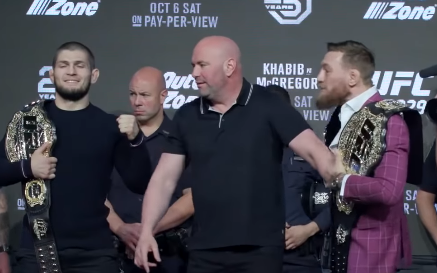 Khabib appeared to see the funny side of the situation.