A nice show of loyalty here, but Thomas Bjorn clearly won this battle.

It all started so well for Rickie Fowler.

Paired with Dustin Johnson in the fourballs on Day One, Fowler helped deliver a 4&2 victory. The morning session saw red across the board and only a late dip from Tiger Woods and Patrick Reed prevented them from going 4-0 up.

As it stood, they went into lunch on Friday 3-1 up. They finished the day 3-5 behind and never got back within spitting distance of retaining the Ryder Cup.

Following their 17.5 to 10.5 defeat to Europe, Team USA captain Jim Furyk emerged as one of the most gracious losers this competition has ever seen. He spoke with such grace and class that it was hard not to feel for him as he handed the microphone back to M.C David Ginola.

On paper, Team USA had their strongest ever team and yet they lost by seven clear points. Furyk's captain's picks - Tiger Woods, Phil Mickelson, Bryson DeChambeau and Tony Finau - only delivered 3.5 points while the European quartert, picked by Thomas Bjorn, contributed to 10.5 of their points total. 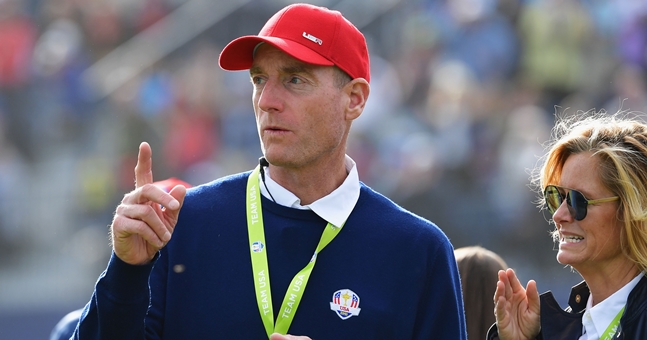 At the final press conference for Team USA's Class of 2018, Furyk again went above and beyond. He had no qualms about saying he was beaten by the better captain, Bjorn.

"I think I'll reiterate what I said on the 18th green," he began.

"The amphitheatre here, the venue, the golf course, the fans, I really can't imagine, if you went down this line, if we could have -- if you could ever have a better venue or better place to play or better crowd to play in front of.

"I don't think we could have a better crowd, a better venue. We were treated great this week, maybe I'll accept from The European Team.

"Hats off to what they accomplished this week. Thomas did a great job as captain. Players on their team, class acts, and gritty. When we put some heat on them early this afternoon, they responded. And they played some great golf this week, and I take my cap off. Thomas was a better captain, and their team out-played us. And there's nothing else more you can say. They deserved to win. They played well."

All well and good but when a reporter asked Furyk, 'Why was Bjorn a better captain?', Fowler grabbed the microphone to respond:

"Well, he wasn't a better captain."

Before he could go on, Furyk looked down the line at the loyal Fowler and signalled that he would answer that one himself.

"Thomas put his guys in good position," he said. "He did a good job.

"I think when a team is successful, as they were and as well as they played, that shows to me they had great leadership. And I think when you put yourself in this position, you walk into this room, you've got to tip your cap and you've got to give them credit.

"I know everyone on this table wishes they had played better, and I wish I probably would have done some things differently, as well, but at the end of the day we did the best we could and we all worked hard.

"I look across the room and look at what they did, and you know, they played better and they did a better job. I'm the first to say it. My hat is off to Thomas and his group. They played great."

After all the hype and fire and barbs - some of it real, some of it concocted - it was great to see Jim Furyk go out with his head held high.