Slow play. One of the ugliest traits in golf.

It could be a Sunday stableford in your local course, it could be the US Open on Sky Sports but no matter where it is and no matter when it happens, the end product will always be the same. Uncomfortable viewing and unenjoyable golf.

The golf was drawn out at the weekend and it was far from exhilarating. The culprit, a 25-year-old Californian. 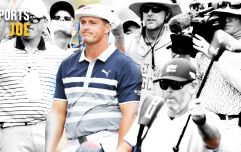 END_OF_DOCUMENT_TOKEN_TO_BE_REPLACED

Playing in the Northern Trust Open at the Liberty National golf course in New Jersey, Bryson Dechambeau took the biscuit. He brought slow play to a whole new level. Had his playing partners looking bored and disinterested. Had spectators counting the birds in the sky and had Sky Sports losing viewers by the second.

This has been his wont for a while. A Southern Methodist University scholar, the NCAA ranks are regularly deemed a hot-bed for painfully slow and deliberate play. And Dechambeau brings it to life like never before. Or you could say puts it to sleep like none of us have ever seen.

Thankfully, he's been called out this time around.

With fellow pros losing their patience, Dechambeau's farcical delays have been latched onto. Someone had to do it.

Because this is no minor inconvenience. It's a blight that can put fellow players off their game, that can ruin a game that's meant to be enjoyed.

An example occurred on Saturday when he stood over a ten foot putt for more than two minutes. Onlookers were nearly relieved when he missed. In the same round, he paced out a 70 yard pitch, taking a lot longer than normally needed to pitch it.

"Slow players do this to their playing partners making the game less enjoyable. Problem is, the unaffected single minded twit in this instance, doesn’t care much for others," he tweeted.

Just look at Tommy and Justin, both looking completely bored. Slow players do this to their playing partners making the game less enjoyable. Problem is, the unaffected single minded twit in this instance, doesn’t care much for others.

He wasn't done there, and he has a solution for this time-wasting.

Slow play is “slowly “ ruining the game of golf. It’s time the people that can do something, did something. Having said that , the players that are pathetically slow should just have more respect for their playing partners. And get on with it!

Nor does Ian Poulter enjoy it.

Andrew I’m sorry you’ve stopped watching the @PGATOUR. There are a few players that continually disrespect their fellow pro’s and continue to break the rules without a conscience. It should be self policed but clearly this won’t happen.. so disappointing it hasn’t been stopped. https://t.co/yxfF2fFZ2D

Slow play in golf isn’t anything new - but nowadays with social media, TV etc it’s just being exposed to a new level. This seems like the perfect time to do something about it! C’mon people it’s 2019, let’s figure this out!! @PGATOUR @EuropeanTour @RandA @USGA

It's the bane of every golfer's life. Dechambeau met the critics head on, saying "when people start talking to me about slow play and how I’m killing the game, I’m doing this and that to the game, that is complete and utter you-know-what," he said.

"When you start personally attacking people on Twitter, it’s like, come on, dude,” he added. “Let’s have some more balls and speak to me to my face about that," he continued.

Don't be that guy.


popular
"It's giving the Kerry team a bad image. They don't look like footballers, they look like gurriers." - Liveline has peaked
Bundee Aki overheard in the stands after Faf de Klerk hit on Conor Murray
Eoin Murphy's calls from the goals show Cork they're in for a completely different ball-game
"That's one of the best races I've ever had" - Coscoran kicks like a demon to seize the day
Gatland on his decision to start Bundee Aki, and drop Tadhg Beirne
The SportsJOE 12 o'clock quiz | Day 377
Aidan O'Shea better get to a telly soon after his All-Ireland semi-final admission
You may also like
4 months ago
Bryson DeChambeau on text Tiger Woods sent before Arnold Palmer victory
8 months ago
Bryson DeChambeau hits drive so hard that it disappears into the ground
10 months ago
"He's found a way to do it. Whether that's good or bad for the game, I don't know"
1 year ago
"I'm going as hard as I can to get as strong and big as I can" - Bryson DeChambeau
4 months ago
EA announce the return of PGA Tour series
4 months ago
Four more head-scratching weeks without golf and underage training as leaks arrive on time
Next Page