It's never been done in GAA history. Kerry and Kilkenny have both come close until falls at the final hurdle. It all caught up on them.

On Sunday, Dublin will have a chance of doing something no team could ever do. They have a shot at immortality. They are one win away from being crowned the greatest GAA team of all time.

They are 1/5 red hot favourites to do it but we've had a situation like this before. Kerry were 1/6 to do it in 1982 until Offaly and Seamus Darby hit them with the knockout punch.

Eoin 'Bomber' Liston was part of the Kerry team in '82 and on Thursday's GAA Hour Live at the Liberty Hall, he explained how the burden of history and expectation caught up on their great team. 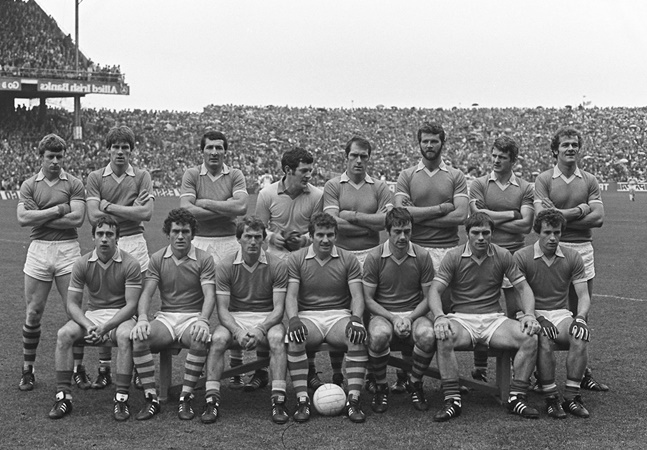 "Have no doubt about it, pressure comes on when you're coming down that straight. Some of us did things that we normally wouldn't do. Our positioning, we lost our shape. I'd only put it down as pressure," he says.

"I remember I was chatting to Paudie O'Mahoney during the week and he said to me, 'I remember ye were as pale as ghosts at breakfast. Do you know? Even though there's no hype, have no doubt. You could hardly talk and you'd be pale and you're wondering and next thing the match is on and you feel it's going away from you...If we're close enough to them down the straight with ten minutes to go, you'll see a lot of mistakes..."

"I know for a fact that the more All-Irelands you play, the more nervous you get. People say experience, Jesus, the experience of the fellas I played with, the pressure got worse and worse. Because you realise that you're not just playing for yourself and your family. You're playing for the county. Then you throw in the five-in-a-row pressure, let me tell you, there is pressure."

"Have no doubt about it, pressure comes on when you're going down that strait. Some of us did things we wouldn't normally do in the last five minutes..."

Bomber Liston recalls buckling under the hype of going for five in a row.

Or is he just being a cute hoor? pic.twitter.com/ErrNmkclYh

The thing about Dublin though is they've stared pressure down before. When Lee Keegan scored that famous goal and the whole country was behind Mayo, they just took it in their stride and won the next kickout. Bernard Brogan senior maintains that Steven Cluxton's ice cool persona has a huge part to play in this.

"We might see mistakes but Dublin have won games by a point. They've won two All-Irelands by the last kick of the game. When another team get a goal, Dublin have an ability to get going. Cluxton's kickouts, he contributes to that because we win a lot of them, we get the ball again. When games go against teams, they kick out the ball and they lose it - the whole game and momentum changes, that's crucial for Dublin..."

None the less, Bomber Liston recalls the aftermath of the '82 loss. A difficult time for Kerry people, they still made the most of it.

"There was a song that time 'Five-in-a-row, five-in-a-row, can not believe we've won five-in-a-row. We were in Mulligan's the next day, it was the worst experience of all the next day. You're trying to blank it out. We were having a few pints, there wasn't much chat. Then the song turned to, 'Five in a row, Christ we were close to the five in a row..."

You can listen to The GAA Hour live from Liberty Hall here.

popular
The SportsJOE 12 o'clock quiz | Day 142
SportsJOE 2000s Football Quiz | Round 12
Rory McIlroy defends Dustin Johnson after Brooks Koepka comments
Only a Champions League fanatic would get full marks in this quiz
Collin Morikawa makes huge world rankings leap as Lowry drops back
Robin McBryde on training session that sent message to Leinster's international stars
Brooks Koepka puts PGA Championship leaders on notice with final round comments
You may also like
4 days ago
Goal disallowed in Dublin SFC because player wasn't wearing his gumshield
3 weeks ago
The former Dublin minor star that led Ireland to Grand Slam glory
1 month ago
No promotion or relegation in Dublin championship in 2020
2 months ago
Seven-time All-Star Goldrick using time off to strengthen and improve
4 months ago
No fear of McCarthy losing a lifetime of fitness
4 months ago
"Sometimes sport can overwhelm you, it was time for him to take a deep breath"
Next Page