The wonderful story of the first Nigerian to play for Laois

In Courtwood they thought Eddie Kinsella was going mad.

They've thought that for a long time now Eddie says. Collins Ugochuwku was only in the country eight weeks but Eddie, the Courtwood senior football manager, was talking about starting him in the first round of the championship. The mad-man. Now this was no tiddlywinks with a safety net, this was win or bust, it was the biggest game of the year against the biggest club in the county. The kid could barely even solo the ball but still Eddie was talking to him at training, he was revving him up for the job of marking Portlaoise's best player.

Uguchukwu was eager and Eddie's hunch was good because, in one of Courtwood's biggest ever wins, Garrett Dillon barely got a kick and the newcomer was named man-of-the-match. On the line, the Courtwood manager had a smile as wide as the moon. 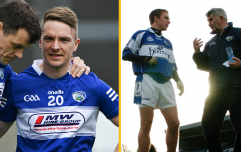 END_OF_DOCUMENT_TOKEN_TO_BE_REPLACED

Now let's go back to the start. Collins Ugochukwu was born in Nigeria and along with his family, he moved to Newbridge at the age of three. Sarsfields were the local GAA club but it would be a while yet before they'd get a sniff. Soccer was the first love and after impressing for a local team, he earned a move to England where he signed a contract with Crawley town. Further stints followed in Scotland and with Bohemians but with Covid stopping lower-league soccer at the source, and with a young family to look after, Collins Uguchukwu moved back to Ireland.

He moved to Courtwood. And this is where the story gets good. 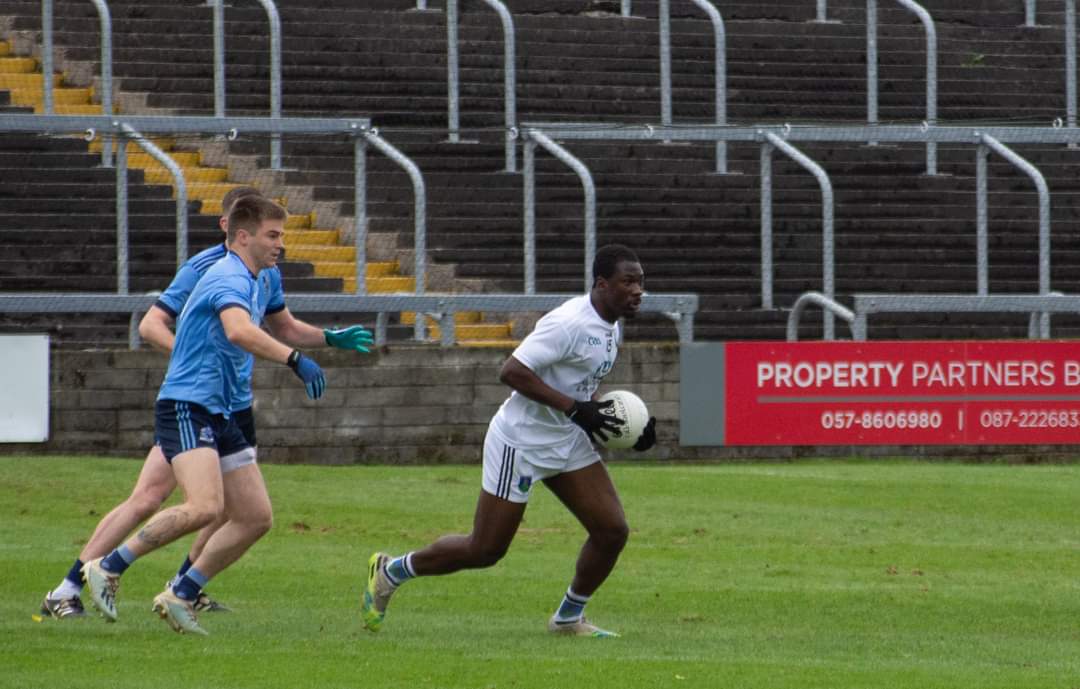 In Courtwood, he came across Pat O'Connell whose wife is a friend of Collins' girlfriend. They were chatting one day when, out of the blue, Pat asked him down to the field to play a bit of Gaelic. Collins had played a bit with Sarsfields as a youngster so for something to do, if nothing else, he said he'd give it a lash.

END_OF_DOCUMENT_TOKEN_TO_BE_REPLACED

Damien Behan was training one of those nights when Collins was only new to it and, after coming up against him in a five-on-five game, he called the boys aside.

"I said to the boys I said 'Who's the best footballer in Laois?' They went Donie Kingston. I said this fella could mark him.

"I said it because he's like a hoover, it's impossible to describe the intensity with which he marks. I remember I was passing the ball to Niall Donaher and Collins had come, intercepted the pass and gone before I'd even seen him. The same thing happened again and I was like 'Jesus where did he come out of?' And that's when I called the boys aside to say this lad has something."

Eddie Kinsella wasn't going around the place with his eyes closed either.

END_OF_DOCUMENT_TOKEN_TO_BE_REPLACED

"Eddie was the first to say we could make a footballer out of this fella," recalls Behan, who double-jobs as a junior player and the club's development officer.

"Still, it was a big move on his part to start him against Portlaoise. I can actually remember that game, I was sitting with two friends of mine and they were going 'what are we doing with a fella out there who can't even solo the ball?'

"But Collins proved them wrong. Gareth Dillon was a man who'd often do damage against us but that day he became so uncomfortable with the way Collins played that he looked demoralised for a finish."

Courtwood enjoyed a good run in the Laois championship and with Oguchukwu learning fast, it wasn't long before Laois manager Billy Sheehan was on the phone. It was last Saturday in Hollymount when he gave him his inter-county debut in the O'Byrne Cup against Wexford. 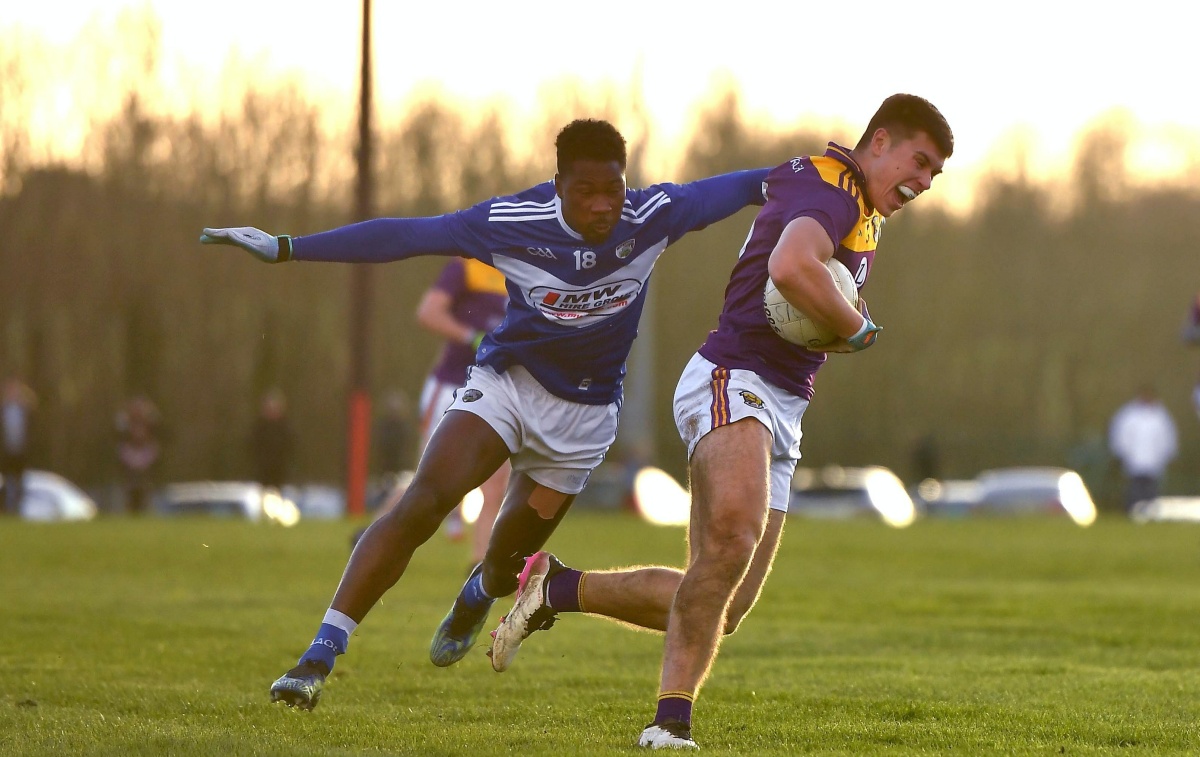 "It's an unbelievable story to be honest," says Kinsella.

"I'll tell you the truth, when he came to us first, his football skills were very raw, very raw now. He was raw, and he wasn't up to much skill-wise but two things stood out about him that told me he could do something for us. The first was that his personality, his personality was just top class, now I mean top class. His attitude towards the game is just excellent, he's just so enthusiastic about the whole thing, so disciplined and if you're ever chatting to him, he's just an infectious character to be around.

"The other was how hardy and tough he was. We were playing possession games and I saw this lad hounding our fellas down and I mean hounding them. We played a few games among ourselves in training and I just noticed he was a woeful tight marker.

"Look, he has a lot of work to do regarding the skills of the game but he has a brilliant attitude to do that. He's so disciplined and there's no messing with him at all. He'll never pull up going into tackles and he's super athletic. He's very vocal with our team and we all love him here. It's like he's been here his whole life."

And by the sounds of Damien Behan, this story is only getting going yet.

"It's a great progressive story and it's just brilliant for everyone here in Courtwood. We're only a small little parish, there aren't too many of us only Dunnes and Behans and Tyrrells and Doyles and a few more families and now we've the Ugochukwus! When we've a match we've Collins' family there, his girlfriend and his kids. It's great and we hope the best is yet to come."


popular
Roy Keane flatly rejects longstanding perception of ex-Man United midfielder Paul Ince
Allianz National Football League Round 1: All the action and talking points
Sean Dyche set to be named Everton manager after Marcelo Bielsa talks break down
British publication urges Gareth Southgate to claim Evan Ferguson for England
"Not cool" - Jurgen Klopp far from happy with question about late Liverpool fouls
John Egan breaks Wrexham hearts and denies Ryan Reynolds a Hollywood ending
Roy Keane leaves ITV pundits in stitches after Pep Guardiola's pre-match interview
You may also like
5 months ago
Aisling Donoher gives one inspirational interview after 'doing it for Dan'
5 months ago
"It's been 20 long years coming, but we did it" - Donoher stars as Laois have their day in the sun
8 months ago
Lengths Billy Sheehan went to for Collins Ugochukwu shows how welcoming the GAA can be
8 months ago
Buff Egan calls it as Laois skin the Cats in O'Moore Park
10 months ago
Cha Dwyer scores an incredible last minute over the shoulder point to save Laois from relegation trouble
1 year ago
"We're not going there just to fulfil the fixture." - Clough/Ballacolla hoping there's more to come
Next Page