Meath men Ronan Jones and Enda Cahill have been putting in the hard yards for a while now.

On the other side of the world.

The pair are in college stateside, studying finance side by side in Northeastern University in Boston but for this weekend, the studies will be put on the back burner and Boston will be left behind them because the lads have more important business to take care of.

The Meath under-21 Division One football final between rivals Dunboyne and Ratoath throws in at 2.00 in Páirc Tailteann on Saturday afternoon and Jones and Cahill are coming to Navan from afar to take lumps out of one another.

Best of luck to our U21 footballers, a lot of whom will be aiming for their second adult title of the season when they face neighbours @RatoathGAA in the final in Pairc Tailteann at 2pm tomorrow. Bring the noise 💛🖤💛🖤 pic.twitter.com/Gq4F6SwmKs

They're on opposite sides in the decider and their friendship will be forgotten about for more than an hour this weekend.

Jones of Dunboyne has plenty of experience in the long trek home for games. The 21-year-old spent his summer toing and froing from Boston to the Royal county and all the way back for the good of the St Peter's cause as he played a key role in their first senior championship win since 2005.

He was also a member of the Meath senior panel last year and is one of the most highly rated youngsters in the county. Cahill of Ratoath meanwhile, studied Global Business alongside Jones in DCU a couple of years ago and took up a bit of rugby to keep the fitness ticking over in America.

But as the big game got closer, the real preparation took hold in America, as the lads' roommate Michael Malone told us recently.

"The two lads have been going to the gym together and have been doing their own training sessions in a nearby park," he said.

Nothing like that struggle abroad to find a wall or even a bit of grass to play ball on.

"They also gave each other the 'champo haircut' the other night in preparation for Saturday."

Old traditions die hard and for some reason, Bertie Ahern also makes an appearance in the photo. 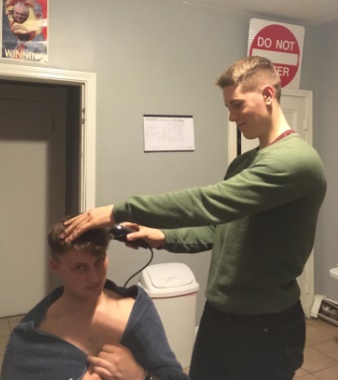 The less said about that the better.

Far away from home in body but they've never been closer to Dunboyne and to Ratoath in mind. Wonder who'll have the bragging rights on the flight back on Sunday night?


popular
"There's a nice bit of balance in that full forward line" - Mayo moving well
You have five minutes to name these four footballers, but it probably won't be enough time
The SportsJOE 12 o'clock quiz | Day 212
Bruno Fernandes had an endearing reaction to being named Man United captain
Alfredo Morelos on ultimate wind-up as Shane Duffy has day to forget
Sergio Aguero brain-freeze as he grabs Sian Massey-Ellis
The SportsJOE 12 o'clock quiz | Day 211
You may also like
2 months ago
"When Sean Boylan was around, you didn’t need a psychologist or a counsellor - he did it all himself"
3 months ago
"Sure everyone breaks ribs" - O'Connell made of tough stuff
3 months ago
"Ah Jesus Brian why didn't you tell me?" - the GAA's youngest Millennium Men
4 months ago
10 national treasures who make the GAA what it really is
5 months ago
Wonder of the GAA world reminds us how to win and enjoy every minute of it
1 year ago
"Most teams are lucky if they have one psychopath. We had two..."
Next Page