'To be fair, that was the plan. And it worked!' - Tony McEntee on kick-out strategy

"Here's your chance to defend yourself... !"

Goalkeeper's kick-outs, and the attacking and defensive strategies around them, have become a huge part of football over the past five or six years. Stephen Cluxton revolutionised the game with his kick-outs while Rory Beggan can pick out the chest of Monaghan men, on the run, some 60 yards away.

END_OF_DOCUMENT_TOKEN_TO_BE_REPLACED

Many counties would often drop back to concede short, simple kicks from goalkeepers to defenders but Kerry have showed, in recent years, how pressing up on kicks can rattle the very best.

During The GAA Hour Live, in Westport, host Colm Parkinson brought up an interesting, and cheeky, kick-out strategy Mayo used when Tony McEntee was part of Stephen Rochford's set-up. In fairness to McEntee, he did not deny it. 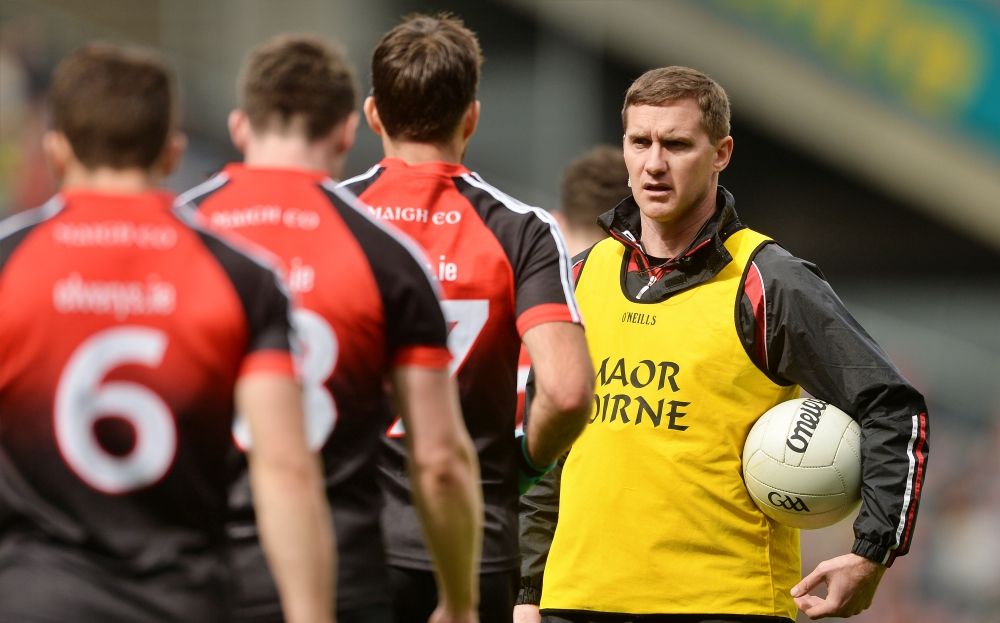 Tony McEntee pictured before the 2017 All-Ireland semi final between Mayo and Kerry, at Croke Park. (Photo by Piaras Ó Mídheach/Sportsfile)

END_OF_DOCUMENT_TOKEN_TO_BE_REPLACED

During the show, Parkinson displayed a tweet from former Kerry boss on the big screen. It read - 'Tony McEntee was a great man to spot and fill space on an opposition kick-out as he slowly withdrew from the pitch, disrupting the goalkeeper's appreciation of space. Jayo [Sherlock] was a good man to drag his backside when required too... '

"So Tony," Parkinson began, "dragging your arse off the field when poor goalkeepers are trying to kick out the ball. Here's your chance to defend yourself." McEntee's response was nothing if not completely honest:

MCENTEE: "So... To be fair, that was the plan. And it worked! And it worked to be honest. I can't actually take credit for it particularly, I can't remember, it was probably Buckley's idea but the idea was... "

MCENTEE: "So, the keeper stands up and he looks out and his... he doesn't know who's who, he just sees a body. So therefore that space is empty or taken up as the case might be.

"So it automatically... because the keepers nowadays are looking between six and 10 seconds for the early kick-out, particularly Cluxton and people like that are looking for space wide in wings to take over the space, whatever. So, in that case, he looks up, sees a man, that's it, 'change my mind, hit it short into the corner' or whatever the case is."

"I didn't quite do what the Kilkenny selector did," McEntee joked,  "got the ball, catch it and take it away!"

“The keeper stands up, looks out, he doesn’t know who’s who. He just sees a body.”

There you have it, now. One to look out for this weekend, and for the remainder of the championship.

You may also like
3 months ago
Join our ultimate sports quiz in Dublin for a chance to WIN a trip to a Premier League game
6 months ago
Join Munster legend Billy Holland for this free mortgage masterclass
8 months ago
[CLOSED] COMPETITION: WIN a two-night stay at the luxury Trident Hotel in Kinsale Harbour
9 months ago
Here's where you can find some incredible deals on exercise machines in 2022
9 months ago
WATCH: This clip shows just how amazing amateur clubs in Ireland really are
10 months ago
Pieta and Shane Carthy encourage people to take part in #HopeOverSilence this Christmas
Next Page