When the TV cameras cut back to the Sky Sports pundits, last weekend, many fans missed out on some great scenes as Armagh and Kildare reflected on the game that had just concluded.

Fans that had been rapt during Armagh's victory over the Lilywhites may have missed the respect both sets of players had for each other or the fact that so many supporters of both county hung around to salute their heroes after the final whistle.

Kieran McGeeney was ecstatic when the match was blown up but was sheer class in the aftermath as he consoled many of the Kildare players he had so recently coached. 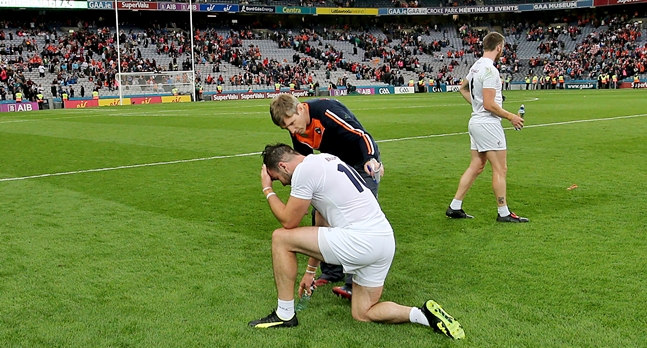 END_OF_DOCUMENT_TOKEN_TO_BE_REPLACED

Fans, at Croke Park and at home, probably missed out on something that occurred during the All-Ireland football qualifier. It involved referee Derek O'Mahony and it was incredible given the greasy conditions underfoot and on a surface that had a huge section relaid after U2 and Coldplay gigs.

Conan Doherty was at the match for SportsJOE and he expressed is abhorrence of O'Mahony footwear during The GAA Hour: Football Show [from 44:00 below].

"The boy in the Armagh game didn't even have studs on. You can't referee at inter-county level if you're not going to bring football boots to Croke Park.

"I saw him running around; he might as well have been wearing loafers.

"I went onto Inpho Photography, just to check, and he's wearing a pair of Asics trainers. I mean, come on! This is top level sports and the boy can't bring a pair of football boots." 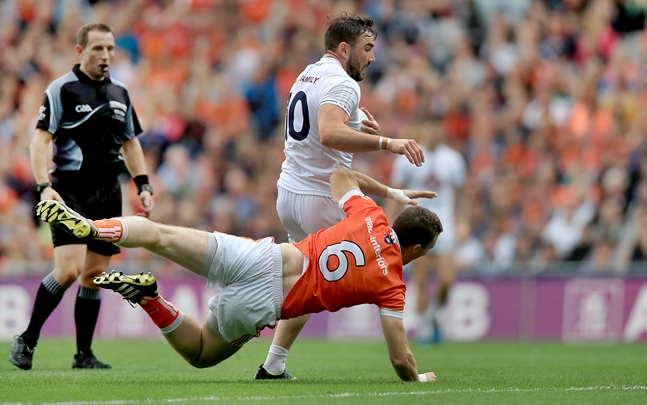 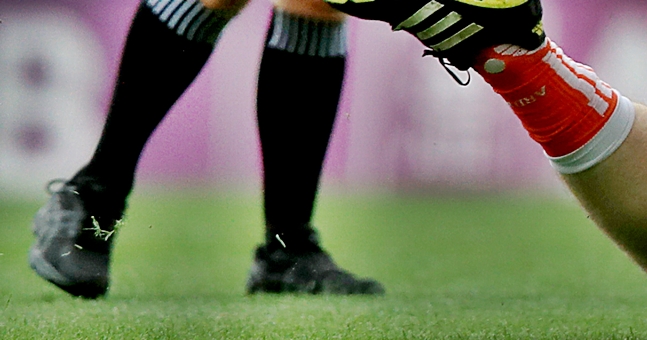 It would hardly inspire a team with confidence when they show up at Croke Park for the biggest game of the reason and the man in the middle was wearing a pair of runners.

The Tipperary referee was not the only official that went into last weekend's action without a proper pair of football boots - Joe McQuillan did likewise in the drawn quarter final match between Roscommon and Mayo.

Blades or moulded studs would suffice if O'Mahony or McQuillan did not want to go for full football studs but a decent pair of boots should be the requirement for such a showpiece occasion.


popular
Solskjaer gamble on Harry Maguire backfires in most horrendous way
WATCH: Munster fans in Paris pay tribute to Anthony Foley with spine-tingling Fields of Athenry rendition
José Mourinho swaps Conor McGregor a Roma jersey for some whiskey
GAA at its best as Bellaghy players run into team-mate who buried his father that morning
"I'll go back running the roads now and make sure my body doesn't get lazy"
Alex Ferguson wrote Mickey Harte a letter - ex Tyrone boss reveals in new memoir
Jeff Stelling loses it during Soccer Saturday after Brighton was denied a blatant penalty
You may also like
2 weeks ago
If you're looking for affordable health cover and 24/7 access to medical pros, this could be just the thing...
3 months ago
Forget counting your steps, this is the key metric you should be tracking instead
4 months ago
Football fans are going to love these brand new Cadbury chocolate bars
4 months ago
Ireland's 2009 Grand Slam stars recall closest call in our rugby history
4 months ago
4 simple ways you can vastly improve the quality of your sleep
4 months ago
Calling all sports fans! This week's Powerball Super Jackpot is €369 million*, here's how to place your bet
Next Page