Mickey Harte was in good form basking in the Clones sunshine after Tyrone tore strips off Donegal and ran out 1-21 to 1-12 winners - a scoreline which probably flattered the men from the hills, to be fair.

He smiled and laughed and enjoyed turning the criticism back on the press and why wouldn't he? In front of 22,609 people, the Red Hand army put on a show for the entire country to enjoy but each of their merciless assaults were just another fearful reminder that Tyrone mean business.

They scored 22 times against Derry in the Ulster quarter-finals. They scored 22 times against Donegal in the semis. They missed at least three clear goal chances on Sunday against the old enemy and they ran bloody riot all over the plains of St. Tiernach's Park. For a defensive team - and, listen, they are a defensive team - they do some serious damage at the other end.

The thing with Tyrone is that, on their day, defensive or not, they look close to a perfect team.

"I would say it was well short of perfect," Mickey Harte disagreed with SportsJOE when asked after the game.

"I think it was impressive… at times. At other times, we made plenty of errors that we need to tidy up on."

But it wasn't like he was automatically preaching caution and just constantly batting down any praise of his men and their stunning performance. He knows what he saw - everyone saw it - and, by God, he's been waiting for it.

"I've been seeing that coming for a long time - this past year and a half," the manager explained.

"I knew that some day we would actually deliver the kind of performance that we're capable of and I think conditions were prime for us today. We do like the dry sod, we like good, hot days in Clones."

It was vindication of sorts for the coaching legend. You see, it turns out that a really well managed, drilled and clued-in side with six superstars can hammer a team of good kids.

This was very much an exercise of men against boys in the home of Ulster football but it was the same lesson being taught on the sidelines where Mickey Harte used all his experience and wiliness to, frankly, school his opposite number.

He did that by anticipating everything Rory Gallagher had to throw at him and counter-acting it with devastating effect.

For most of the game, Donegal operated with two inside - Tyrone man-marked them. 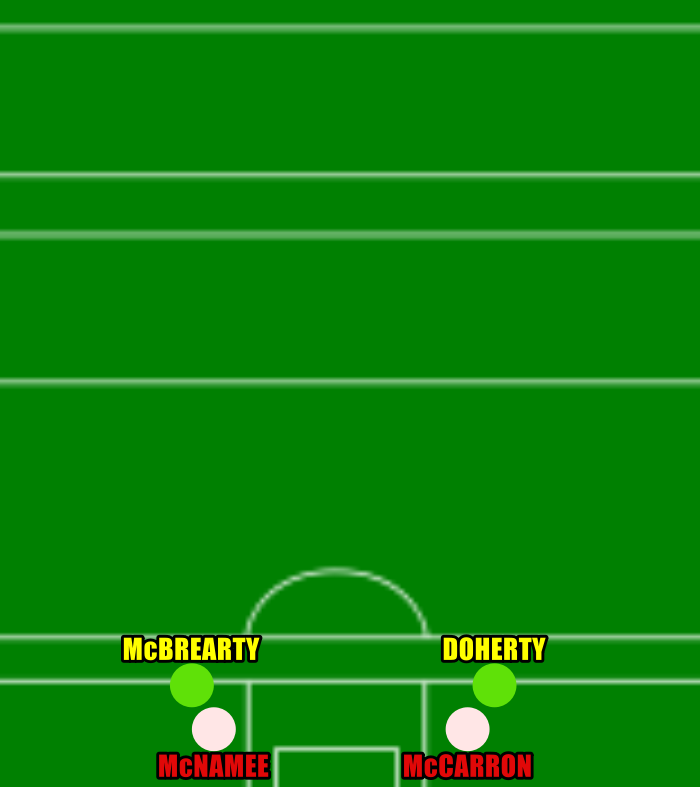 Naturally though, they wanted Colm Cavanagh manning the six-yard box but Donegal tried to occupy him.

To do this, they flooded the full forward line with three, sometimes four, players. 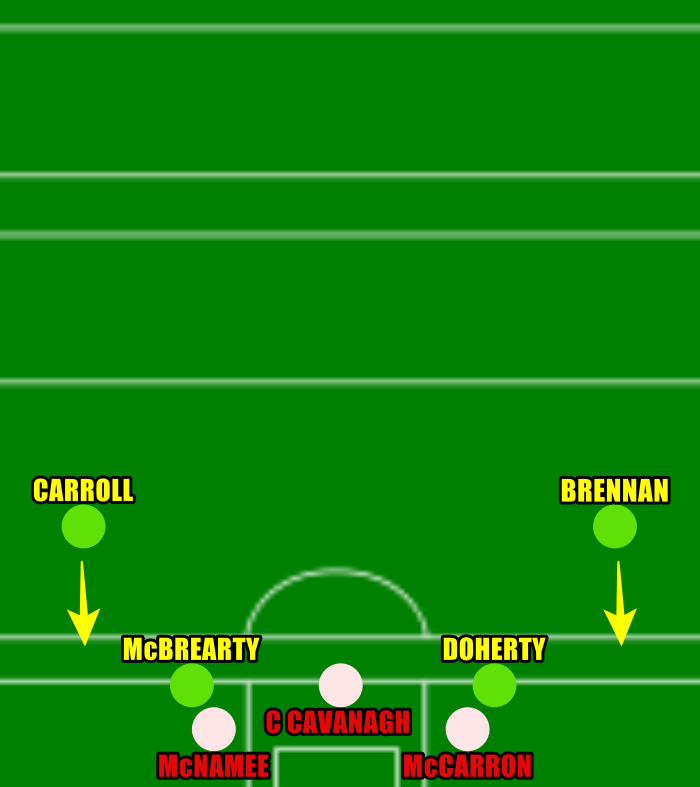 However, as soon as Tyrone lost the ball, they filed into a new defensive formation.

Conall McCann filed back as an extra player to keep Colm Cavanagh free no matter what. 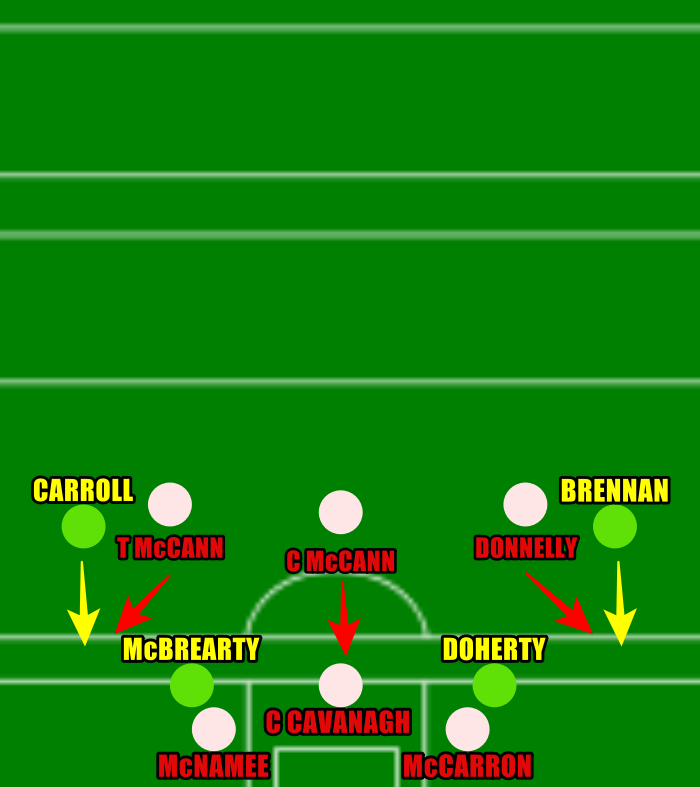 Those three became the pillars - the initial wall that would forbid Donegal bodies from passing and they dropped deeper as required.

The next wave of bodies came in the form of Aidan McCrory, Peter Harte and Niall Sludden. 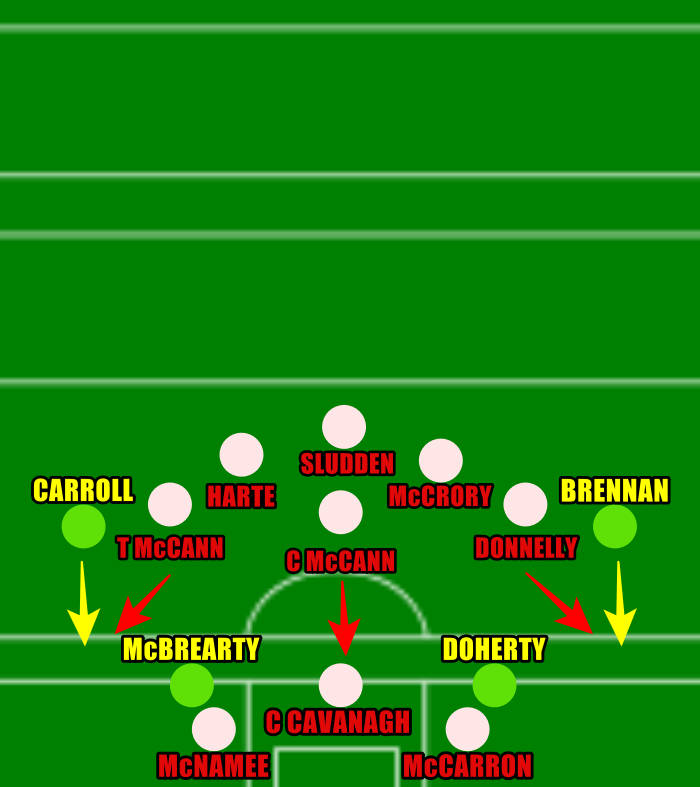 After that, you had a pick from Sean Cavanagh, Kieran McGeary and David Mulgrew. 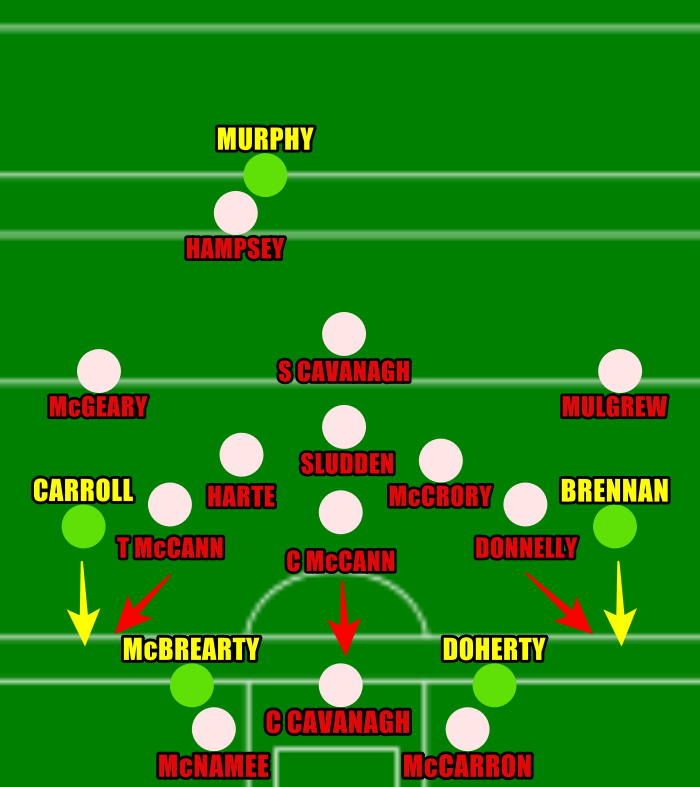 "It dilutes your focus, it's very beneficial to get away from social media"

END_OF_DOCUMENT_TOKEN_TO_BE_REPLACED

The one eventuality which Mickey Harte was probably ready for but didn't have to deploy was big Michael Murphy going inside but not once did the Glenswilly man move to full forward.

Instead, he ploughed around the middle with Hampsey hanging off him and he didn't ask Tyrone any different questions.

Donegal tried to stretch them. They tried to keep Colm Cavanagh busy, make the pitch bigger by forcing Tyrone to play extra full backs and then either run at their less sturdy 45' defence or kick from a little further with more freedom. It didn't work because Tyrone were ready for it and crucially, Tyrone set up like this:

Those 10 players didn't have any specific individual positions but the team had specific positions and they filled them accordingly as they dropped back into defence. Different players were covering those different spots when needs be, they managed the game and made sure everyone was covering a job as they went on.

When they won the ball, all 10 of them took turns in attacking - even Hamspey chipped in with two, outscoring Murphy from play.

10 of Tyrone's starting 15 registered on the scoresheet. So excuse Mickey Harte for finding the irony in the narrative that his team aren't good enough going forward.

"I'm smiling because I was thinking you might've been going down that other road of, 'we didn't score enough goals'," he beamed afterwards.

"We had a lot of the things that people are saying are not in our game anymore. There was lots of fast break play, there was lots of play in open spaces, of course there were defensive setups too and there were times it was very clogged.

Tyrone have changed the game once more and they've changed it in defence and attack. Mickey Harte is at it again.


popular
ROG hits the nail on the head assessing Ireland's performance
The Ireland XV that should definitely start against Italy
Player ratings on a dismal day for Ireland in Twickenham
"Emotions will be charged" - Sean O'Brien backing Ireland for Triple Crown
QUIZ: How well can you remember this season's Premier League results so far?
"Next thing, all I see is this 'BANG' coming in over me... It was O'Driscoll"
Triple Crown wrenched away as England scrape Ireland off their boots
You may also like
6 months ago
The GAA Hour: Dublin's 12 minute destruction, Peter Keane's games and the real reason for falling attendances
6 months ago
The best footballer in Ireland this year is 100/1 to win Footballer of the Year
6 months ago
All-Star 15 of footballers who HAVEN'T made it to All-Ireland final
6 months ago
O'Brien the game-changer as Sludden's substitution proves costly for Tyrone
6 months ago
Diarmuid Connolly black-carded as Dublin see off Tyrone challenge
2 weeks ago
Dream team and fact file of the final four in Fitzgibbon Cup
Next Page