Before the sheer power of Dublin's bench became a major factor in deciding the destination of the Sam Maguire in 2017, Lee Keegan had Mayo dreaming.

The Westport right half-back scored a beautiful goal in the 2016 All-Ireland final replay against Dublin and repeated the feat 12 months later to nudge Mayo into the lead in the second half of the 2017 decider.

Although the replay ultimately brought with it a familiar sense of pain and dejection for Mayo, Keegan's goal was a moment to savour, latching on to Andy Moran's pass before rifling an unerring shot high into the net right in front of the Dublin supporters.

Keegan was the special guest on this week's GAA Hour football show and the 28-year-old relived the moment in fine detail:

"I suppose at the time, momentum is a huge thing and you're thinking there's seven minutes left on the clock and it's a great time to get a goal but I looked at the Dublin players and none of them seemed to bat an eyelid.

"It was just normal for them – and in the next play they scored a point, so that shows you what they were thinking. There was no reaction, thinking 'oh no, not again,' they literally just went straight back to their whole process. The whole team was just ready to move on to the next play. 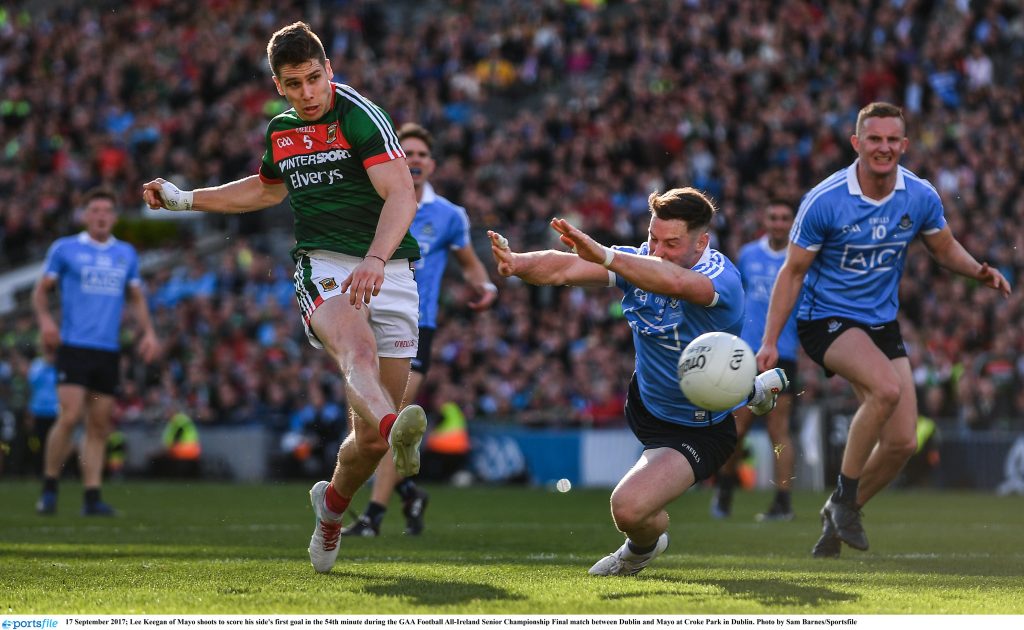 When asked by host Colm Parkinson if he had wanted to look back and see one or two of the Dublin players giving out to each other, he said:

"Well, it's a sign that you're getting on top and that there might be a crack there, but they've been in that position so many times that they've just played until the very last minute. They're never a beaten team. That's the hardest thing about Dublin, they're never actually beaten and when that goal went in, I thought 'this is it, this is our opportunity,' but James McCarthy got the next score for them and they just took it from there, which was very unfortunate for us."

END_OF_DOCUMENT_TOKEN_TO_BE_REPLACED

It's a fascinating insight into what it must be like to play Dublin in a decider. Tearing through their defence to score a cracking goal in the 54th-minute and get Mayo in front was a glorious moment for Keegan, but his main takeaway from the moment was Dublin's reaction to the moment or lack thereof.

It's the emblem of a remarkably well-drilled unit: the ability to just instantly forget a bad moment and carry on with the game, still driven by that singular belief that they will win. That's what Dublin have. That's why they've won the All-Ireland three times in a row and that's why Keegan hates playing them. He's not alone there, though.


popular
The SportsJOE 12 o'clock quiz | Day 189
QUIZ: Guess the footballer from their Wikipedia page #11
"My job at Sky is not to be a cheerleader for Rory McIlroy" - Paul McGinley
QUIZ: Can you name the first signings of these famous managers?
The SportsJOE 12 o'clock quiz | Day 188
Conor McGregor shares DMs from Dana White to justify boxing comeback
QUIZ: Can you guess the football shirt sponsors of these classic 90s kits?
You may also like
1 week ago
"My own mother would go to three games on Saturday, three games on Sunday"
1 month ago
"I'd say to fellas 'if you bring a friend and they stay playing, we'll give you a prize"
1 month ago
"That's a risk I'd be willing to take" - Byrne ready and raring for a championship
1 month ago
Goal disallowed in Dublin SFC because player wasn't wearing his gumshield
2 months ago
The former Dublin minor star that led Ireland to Grand Slam glory
3 months ago
No promotion or relegation in Dublin championship in 2020
Next Page