It's The GAA Hour Show live in Roscommon, it's 17 years on and the St Brigid's man says an interview only ventured down this road  once before.

"You've some balls on you Wooly, I'll give you that," he laughs.

He walked out the last time. Nancy's bar in Roscommon town for The GAA Hour Live show is a relaxed setting though and so with the floor all his, Dolan tells a story.

There's no way of telling this one quickly.

"We went up to play Donegal a couple of weeks before we played Galway in Hyde Park in the championship. I think it was three weeks out. Toby (John Tobin) was over us, so we had the showers anyway and sat down afterwards for the chat, the normal chat after a game.

"Toby goes 'we're staying in Derry after the game.' We were like 'Jesus, why are we staying in Derry? In our Roscommon gear, we've no money - with the currency change - the euro or sterling or whatever it was back then." 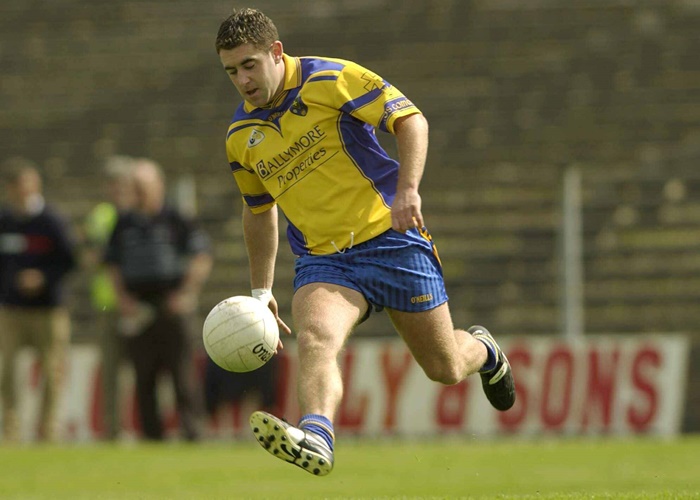 Frankie Dolan in full flight in a Roscommon jersey

But Derry it was.

"We went out anyway, had a great night. Went back to the hotel. It was like a private area. There was a pool table there, obviously!

"We were residents, there was no-one in the area bar the barman so we went into the back-room, we were playing away...We had a bit of craic."

And then one thing led to another.

We said lads, 'we'll toss a coin, whoever loses can take their clothes off and play the game of pool.'

"Needless to say, myself and Nigel (Dineen) lost the toss."But no-one ever talked about us beating the two lads in the pool." 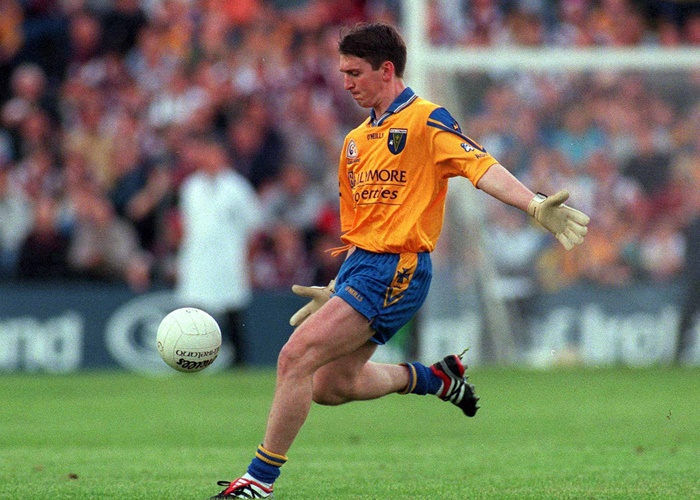 Nigel Dineen in action for the Rossies

But drunken craic or no craic at all, the CCTV cameras caught the naked pool players and nationwide scandal ensued with the Sunday People newspaper doing a five page spread.

"Before breakfast (we knew shit was going to hit the fan.) The chairman got word from, ah it was a lovely hotel we were staying in in fairness, they says it's going to the newspaper, whoever had the CCTV wanted to make a few pound. To be honest I didn't really give a shit, I'm thick skinned enough..."

"But I'll never forget. about two weeks out from the game, I was staying in a friend's house. We had a cup of tea that morning and he said 'ah it's not too bad Frankie.' I said 'Thank God.' He says 'it's only the first three pages'. I sat down anyway, said 'give me that paper.' Another two pages!

On a more serious note, Shane 'Cake' Curran feels it was unfair on Frankie, his pool partners and indeed the whole Roscommon football team as their preparations took a serious dent and with the team's season quickly unravelled there after.

"To be honest about it, it's funny looking back but it had very serious consequences for us. It was a mountain out of a molehill, what happened to the lads was wrong. There's families behind the stories, the private lives of players..."

"Had that been a Dublin player, a Galway player or a Kerry player it wouldn't have got out because the powers that be would have locked it down...The team ended up being disbanded, there was a lot of negative publicity, a code of ethics came in...It wasn't an easy thing to pick up."

You can listen to The GAA Hour Live from Roscommon right here.


popular
From Canada to Carlow in the name of hurling: Nicolas Redmond's journey to the Fitzgibbon Cup
Kerry's captain selection for 2022 sums up the problem with their outdated system
Eddie Jones shares great tale on hour-long chat with 'inspirational' Roy Keane
"It must be difficult to say no, having won a game and heading back together"
Chelsea forced to change Stamford Bridge changing room after Liverpool complaint
Jesse Lingard 'angered by lack of respect' shown by Man United
Roy Keane has heaped praise on Trent Alexander-Arnold
You may also like
2 months ago
"There's plenty of heartache in this management trade, so you take these good days" - Hogan on the double
2 months ago
"I just can't do the training to be honest" - Deasy's hamstring woes a cautionary tale
3 months ago
"I'll go back running the roads now and make sure my body doesn't get lazy"
3 months ago
"There are clubs in every county that you just know - they like fighting." - Fighting passes on through the generations
3 months ago
Wooly and McAvoy clash on the subject of Championship reform
3 months ago
"That's just sport. It made yesterday all the sweeter." - After the darkness comes light for Mahony
Next Page