You need only look at Tadhg Deasy. He didn't make the Rockies' starting 15 for their county final win over Glen Rovers but is now in with the big boys, trying to make a name for himself on the Cork senior panel. Deasy, it should be said, turned the county final upside down with his blast from the bench but it just goes to show you.

"Alan wouldn't be long told in the club here to put his feet on the ground," says his former coach and fellow Blackrock club-man Conor Hurley.

The club that will keep him grounded has tradition coming out of its ears. Not only are they the most successful hurling club in Cork, the Rockies are also one of the most successful clubs in Ireland but even for a place like that, Connolly's rise has been remarkable.

You'd only have to go back one year after all, to when this was the new kid on the block of the Blackrock senior team. Winter turned to summer and even though it's a different country these days, as Connolly gets his chance with the Cork seniors, the story is exactly the same. 70 minutes is all it's taken for him to score 4-2 from play across three National Hurling League games. It was on Sunday, having given Kieran Kingston and his management no real choice in the matter, when the bolter made his first start for the Cork seniors.

Conor Hurley, as any good Blackrock club-person would do, takes us back to their Indian summer of 2020, when a 19-year-old outscored Hoggie to inspire his team to a famous county championship win.

Connolly had 5-52 to his name by the end of it and having seen all that, Kingston didn't even have a decision to make.

Alan Connolly has played 70 minutes for Cork across three games in the National League this year.

END_OF_DOCUMENT_TOKEN_TO_BE_REPLACED

"We knew he was good. At the same time, he was a young fella, he wasn't consistent. The calibre of coaches he has in Blackrock have helped him get that consistency into his game, take Wayne Sherlock, John Browne, Fergal Ryan - all All-stars, Joe Young, all these guys. He went from being the underage star to fighting for his spot on the senior team then.

"Alan was the talisman up along. He was such a good hurler that there's only so much coaching you can do. We just encouraged him to go for goals."

You would only have had to watch the Cork senior hurling final of 2020, or indeed any of the three games he's played for Cork this year to see Connolly practicing what the Blackrock men preached.

"His mentality has always been that way, head down and go for goals,"  The point is a consolation for Alan. They say take your points and the goals will come, Alan does the opposite."

Just like John McGrath, it's not the speed but the composure and class that stands out with Connolly, and that comes from a mixture of two things that have shaped this man's life.

"Alan just loves the place here, he's always either pucking around or in the gym or playing pool with the boys here in the clubhouse. He's a Cashman too, his mother is a sister of Tom and Jim -  Cork legends - so that's in the family. The genes and the tradition there is that you're pucking with a ball from the moment you're born!"

How in God's name could he escape it?

"We have a competitive adult set-up, our second team won the intermediate championship, seniors won the county, there's constant competition. Take Tadhg for example. If you're not playing well, you're out at the moment and that's why things are going well. So that's how Alan realised that consistency was key, you couldn't just turn up and score a goal here and there, you had to be playing well every ball. With those coaches, you wouldn't get away with anything less!" 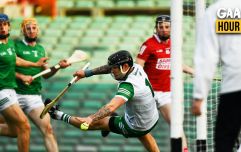 END_OF_DOCUMENT_TOKEN_TO_BE_REPLACED

It's a big step-up from club hurling to county hurling, from u20 to senior, but the stone and a half he's gained since last October means that defenders will have to push hard to push this boy around.

"After that nifty pass for the goal for the 20s, people started to take notice outside of Blackrock then. Alan would have had a very slight frame all the way up, I mean, since the county final, he's put on 10 kilos since he joined the Cork senior set-up. He's starting to fill the size of a senior inter-county player, which will stand to him do you know."

In Blackrock, they won't be getting carried away.

"He wouldn't be long told in the club here to put his feet on the ground! He's no guarantee of starting every game for Blackrock this year, that's how competitive it is and he knows he has to work hard, he won't get away with it if he doesn't and that'll hopefully pave the way for success going forward."

In Blackrock, Alan Connolly has learned the way.

popular
"They're so far ahead of where I was at 18, it's just off the charts in terms of gym and fitness tests"
Damien Duff bides his time before roasting the FAI with 'motivational video' comment
"I don't know if the management know what their best 15 is" - Worrying times for Tyrone going into the championship
Ronaldo removes Coke, shows off the drink of champions in pre-match conference
Christian Eriksen's first words from hospital are a credit to the man
Can't imagine Rangers fans were happy about what Ronnie Whelan called Scotland
Euro 2020 Quiz: Group F

You may also like
2 weeks ago
Cork's baby-faced assassin puts Clare on playoff collision course with Mayo
1 month ago
"The lads couldn't believe how defensive they were" - Why Kerry have to change the way they play this year
1 month ago
"I'd play it in the back garden if I could. We've been training for this since last September"
1 month ago
"I absolutely love camogie. When I was playing soccer, I missed camogie so much"
1 month ago
"Joanne I have a confession to make" - tongue-in-cheek Donal Óg owns his Antrim call
1 month ago
Six minutes was all Alan Connolly needed to score two goals and set up another
Next Page