Even after all these years, McCarthy still the man they all have to catch at Dublin training

He was only a young fella at the time but from the moment his father said it, it hasn't left James McCarthy's mind.

John was a three-time All-Ireland winner himself so when he told his son that "you’ve no right to be on a football pitch unless you’re fit," it wasn't the type of thing you'd let in one ear and out the other.

"He put a huge emphasis on us when we were younger to be fit and strong. He always said football is way more enjoyable when you’re fit and things will come a lot easier to you," McCarthy told us last June.

END_OF_DOCUMENT_TOKEN_TO_BE_REPLACED

These things can be hard to read into at times but having grown up running cross country races whenever he wasn't playing football, it's hardly any coincidence that, even after all these years, James McCarthy is still the man they all have to catch at Dublin training. It's hardly any coincidence that, if you were asked to think about the fittest GAA players in the country, James McCarthy would be one of the first players in mind.

The Ballymun Kickhams ironman is 31 now, he's powering through his 11th year on the Dublin senior football panel but while the young lads come and they go and some of them take him on, McCarthy is still the top dog in Dublin.

"When you're doing the runs at training, you'd see the younger guys and you'd try and kick on to beat these lads behind you," McCarthy says at the launch of Dublin's new sponsorship deal.

"I'm more of a long-distance sort of fella, continually going, they get me over the shorter distances but the long ones I'd be better at alright."

"I don't know if it will last for much longer. I love seeing younger fellas coming in who are hungry and really want to go for it. I'm taking a little bit of pride and joy out of that, I was giving them all a bit of stick saying they still can't beat me in the runs!" 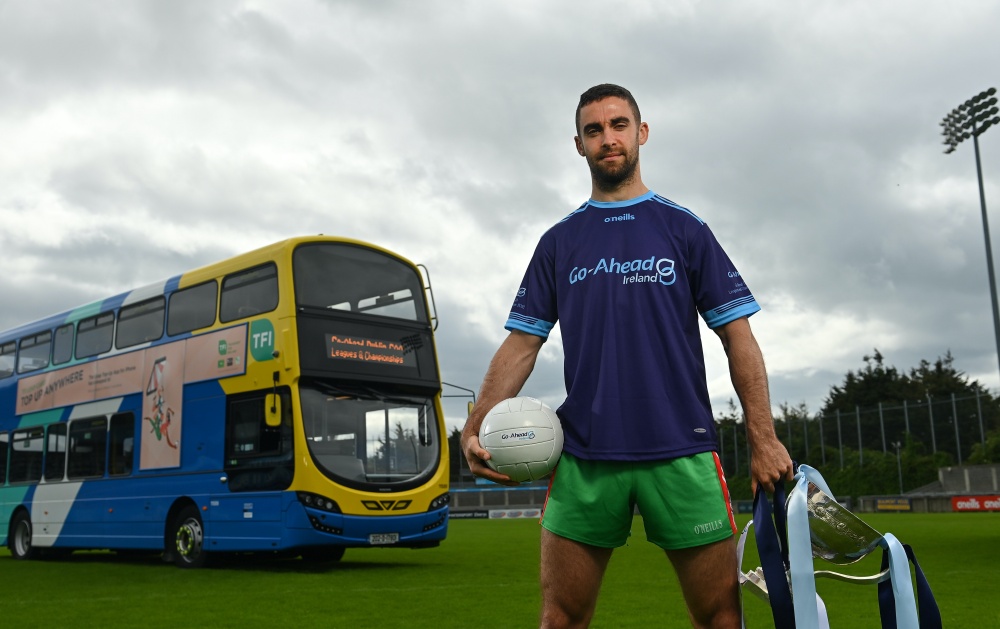 8 June 2021; Dublin and Ballymun Kickhams footballer James McCarthy pictured at the launch of the Go-Ahead Dublin GAA Leagues and Championships at Parnell Park in Dublin. Go-Ahead Ireland are proud to announce their continued dedication to the community by means of partnering with Dublin GAA for the next three years.

END_OF_DOCUMENT_TOKEN_TO_BE_REPLACED

McCarthy says it mightn't last for much longer. But when you look at the man, when you realise that he's barely missed a championship game in 11 years, when he tells you that at 31, he's fitter than ever and that injury prevention is at the forefront of his mind, you'd be a brave man to be betting money on that one.

"The last couple of years I would have put way more focus on injury prevention and keep ahead of that stuff. When you’re getting older as well, you get a bit smarter. I think the first few years I was playing, you’d just do stupid training. You’d train in between training, you’d train on a Tuesday, and on a Wednesday I’d go off and do the runs myself which is brain-dead, you’re asking for trouble, you’re going to get hurt.

"So you just get smarter as you get older as well. And obviously, as you get older, you build up a lot more of a training age. You have so many years of training under your belt, I think you just… I think I’m fortunate enough when I go back training that I’d get up to speed pretty quickly. You have a lot of experience to fall back on.

END_OF_DOCUMENT_TOKEN_TO_BE_REPLACED

It's hard to overlook the fact that his virtual ever-presence in the Dublin half back line has been, at times, down to a mind-over-matter mentality but McCarthy's dedicated lifestyle ensures that nothing is left to chance.

"There would have been a few over the years where you were kind of going, ‘How did you play in those (games) in the end?’ A lot of it is luck. I remember I done my, was it the Leinster final a year or two ago, and being told it was your ACL and it ended up being just cartilage and meniscus, you get a surgery the next day and you’re back playing two weeks later. I’m going, ‘How is that happening?!’

Still the heartbeat of the team, James McCarthy has been some player 🙌 pic.twitter.com/wBSWV3KWz5

"There’s definitely a huge element of luck. You’ve got to obviously look after yourself away from it as well, do your recovery, recovery is huge now with the level of training teams are at, and the intensity, so definitely you can do as much as you can to try to stop yourself getting injured but like, I might go to try and catch a ball on Saturday and I get flipped underneath and I come down on my shoulder, there’s nothing you can do about that. That can happen, that’s the way it goes. It’s a bit of luck and a bit of looking after yourself and knowing how to get your body right for the right time of the year."

James McCarthy's mother and father of all shoulders in the 2017 Dublin county final.#Sickener pic.twitter.com/n1mTHS619J


popular
Shane Lowry delivers big time for Europe as he takes down US stars
"If I break my wrist, it's on f***ing both of you." - Koepka and Berger act the spoiled child
Simon Zebo gives Andy Farrell better answer than any interview could provide
Padraig Harrington's 12th hole reaction as McIlroy and Poulter roasted needs no words
Team USA stars so confident of victory, they start chugging beers at Ryder Cup
Galway fans' frosty reception for Davy Fitz doesn't make any sense
How the band 'Two Degrees' wrote the song that became Tyrone's All-Ireland winning anthem

You may also like
2 weeks ago
The scenes in Croke Park will have young girls saying 'why not me?'
1 month ago
"The pictures making out it was an elbow are a disgrace on John Small and his reputation as a footballer."
1 month ago
The show of respect between Lee Keegan and John Small is what Dublin-Mayo is all about
1 month ago
"It was a bad call by me" - McStay rows back on his commentary of McLaughlin hit
1 month ago
Diarmuid O'Connor made Mayo believe with a moment that will go down in GAA history
1 month ago
Aidan O'Shea gets into it with Philly McMahon as Mayo stun Dubs
Next Page