They came to Tralee for Colm Cooper tributes but Eamonn Fitzmaurice wanted to talk about Lee Keegan.

Tuesday was all about paying tribute to 'The Gooch' after his inter-county career came to an official, statement-releasing end.

As Kerry boss, Fitzmaurice struck the right chord with some lovely recollections of one of the county's best ever players. However, when he sat down with some daily sports reporters, Fitzmaurice wanted to push a new agenda.

More accurately, he wanted to push back.

Fitzmaurice is far from impressed with the reports of Kerry being overly physical in their recent Division 1 draw with Dublin. The Kingdom definitely put it up to the Dubs but Fitzmaurice complained there was a lack of balance in the match reports and analysis before reminding all present that Jim Gavin's men have a 'hard edge' themselves. 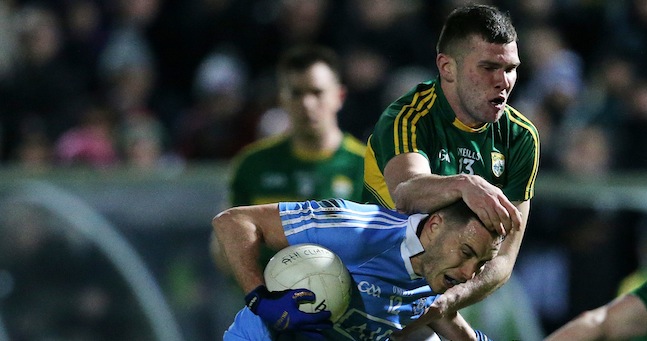 Fitzmaurice was particularly aggrieved with the suggestion of former Dublin star Paul Curran that Kerry 'should be ashamed of themselves' for what he judged to be an over-aggressive nature during that drawn game. He reasoned that any team that is successful over a long period needs some steel to their game before adding:

"Going back to the 2011 All-Ireland final, Declan O'Sullivan was taken out of it. Going back to the 2013 final [against Mayo] when they were down a man for the last five minutes [Rory O'Carroll was concussed and Eoghan O'Gara carrying an injury] and they basically had to tactically foul to see it out.

"Going back to the end of the All-Ireland semi-final last year when one our players was wrestled to the ground and basically choked.

"So they have a hard edge but so have we. I have never tried to paint us whiter than white."

END_OF_DOCUMENT_TOKEN_TO_BE_REPLACED

Fitzmaurice, who will lead his Kerry team up to Croke Park for Sunday's Allianz final against Dublin, insists he would normally hold fire on such matters. He is keen to take a stand on behalf of his players, he says, as he feels there could be a dangerous narrative forming.

He is mindful of the slew of stories about Lee Keegan's close man-marking on Diarmuid Connolly ahead of the Dublin vs. Mayo All Ireland final replay last year. He said:

"My worry was that it was developing into a situation like the All-Ireland final replay last year where there was an orchestrated campaign against Lee Keegan that was effective for the replay."

In effective, Fitzmaurice is surely referring to the fact that Keegan was shown a black card late in the first half of the replay, which Mayo ended up losing.

Fair, if somewhat forceful, comments from the Kerry boss and ones that add some spice to this weekend's final.


popular
The SportsJOE 12 o'clock quiz | Day 104
James Haskell on text exchange with Peter O'Mahony after Ireland's victory over Scotland
David Beckham recalls how a trip to Ireland got him in trouble with Alex Ferguson
"Shane was just gifted. He could play centre back, centre forward, he had everything"
The SportsJOE 12 o'clock quiz | Day 103
"I have more work done than any player in Ireland" - The Trevor Giles tribute show
"The academy boys have turned into small monsters over the past few weeks" - Peter O'Mahony
You may also like
1 month ago
Seven-time All-Star Goldrick using time off to strengthen and improve
2 months ago
No fear of McCarthy losing a lifetime of fitness
2 months ago
"Sometimes sport can overwhelm you, it was time for him to take a deep breath"
3 months ago
Dublin hurler Mick Carton back on the mend after winning another battle
3 months ago
"I'd spent hours and hours honing my left foot with my dad when we were young"
3 months ago
April club month a goner as virus threat causes longer delays
Next Page