O'Tooles know how to go for the hard sell.

The north Dublin club are on the brink of success, they can almost bloody taste it on their tongues and they want one last push to get them over the line.

That push, it seems, is going to be helped by a transfer or a few.

The beaten Division One league finalists lost in the senior hurling championship semi-final this year and are now actively looking to recruit some fresh faces.

'We are always looking to improve our performance and are actively looking for senior hurlers especially players relocating to the North side of Dublin,' the O'Tooles website reads.

Then they went for it with a breakdown of their performance and what their 'commitment' would be back to their players. 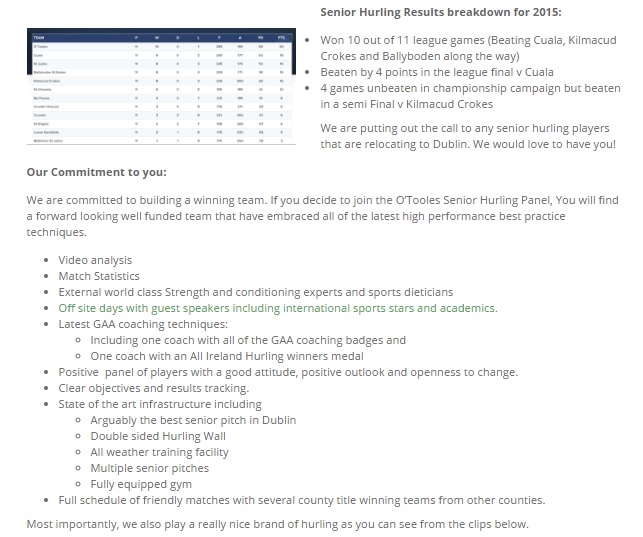 It isn't something that pleases Colm Parkinson too much on The GAA Hour.

The former Laois player has experience with Dublin clubs having played with Parnells and when he called for residency rules in club GAA, he stood over his own playing career.

"I transferred to Parnells in 2011 and, despite what some people think, the commute was the main reason for the switch," Parkinson wrote.

"I was 31 and tired of the rat race. Rushing from work in Grand Canal dock and across the city down to Portlaoise in rush hour traffic was a nightmare, especially with my slight road rage issues. It took almost two hours most nights, and that’s not two relaxing hours on a motorway listening to a podcast. The first hour is stuck in traffic, skipping into bus lanes, moving lanes and generally getting stressed out.

"I opted out of playing with Laois for the two years I played with Parnells too. Again, contrary to what people think, I approached Parnells about the transfer."

Now though, you have O'Tooles putting out feelers and advertising themselves for potential new players.

"I've never, ever seen anything like that on a club website before," Parkinson said on SportsJOE's GAA Hour amid a strong rant.

"You would imagine that the GAA and the Dublin county board should be coming down on that like a tonne of bricks.

"The advertising is wrong. It is not how you should be improving your club. You should not be thinking, 'yes, we're nearly there. This will get us over the line. Let's advertise for new players'.


popular
Antonio Conte 'banishes' four Tottenham players from first-team
"He can add something to our attacking line up" - Jamie Clarke signs for Northern Irish soccer club
Ranking the best county GAA songs of all-time (32-1)
Barcelona allowed to register four new signings, but Jules Kounde misses out
"I’ve never heard someone say something as stupid” - Katie Taylor blasts Jake Paul's rematch comments
Raheem Sterling admits that he was unhappy with Pep Guardiola's team selection last season
"It was unfair on the Galway backs” - Tomás Ó Sé admits that Kerry benefitted from unfair rule
You may also like
1 month ago
"Coming off the field there, I just had a word with Ciaran Kilkenny" - O'Connor hails Kilkenny after pulling the fat out of the fire
1 month ago
"Everyone in Dublin should be proud of them" - Farrell gives a sporting post-match interview
1 month ago
Cometh the hour, cometh the man
1 month ago
Dublin edge Kerry in combined team as 'underdogs' get the nod on paper
1 month ago
Roy Keane makes good on bet after seeing Cork fall to Dublin
1 month ago
"All of a sudden he had me midfield with Niall Scully. We played Na Fianna and I was chasing after Eoin Murchan."
Next Page