Honestly, what is a defender supposed to do?

There is nothing. No way. It's like trying to finish a bowl of soup with a fork. Conor McManus will leave you for dead.

Monaghan champs Clontibret O'Neill's went into Saturday night's Ulster club first round against Crossmaglen as live underdogs. 3/1 outsiders and written off by many, they were up to Armagh and into the lion's den.

They have Conor McManus though and they have a lion too. John McEntee. The legendary Crossmaglen Rangers player and former manager knows that club like the back of his hand but he was on the Clontibret side here.

He lives and breathes Crossmaglen, but he had a job to do and there's no better man for it.

As for McManus, he's part of a select group of footballers who can do astounding things. He was on it from early doors Saturday night. 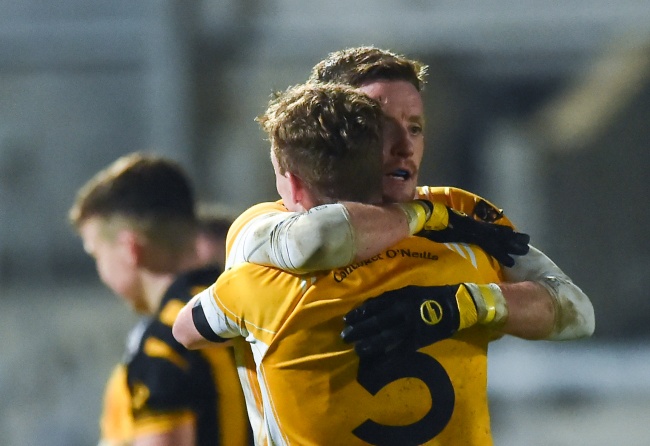 It was a typical November evening up in the Athletic Grounds. Dull, dreary and cold. Bodywarmer weather but that man McManus was as bright as the lights in the early stages and his fourth minute point was one to make jaws drop.

One to lift a team to the sky. One to break a defender's heart and spirit. One to make youngster's dream.

McManus won a hard ball about thirty yards out but he was being well marshalled by some hungry Cross defenders. They hassled and harried. They did enough to knock him off balance and it would have been enough to knock the ball off enough most players.

END_OF_DOCUMENT_TOKEN_TO_BE_REPLACED

But McManus sprinted like the clappers of hell. And the ball was in his control and nobody else's.

So with two Cross defenders right on him, Manzie let one rip off the left. You didn't expect it. Running away from the goals, most players would stay running.

You definitely didn't expect it to go over. McManus' shot rocketed into the sky and bombed straight over the bar. It was the work of a magician.

There are only a select handful of Gaelic footballers who can score a point like this.

Conor McManus is one of them.

Outrageous stuff to send @clontibretclg to Ulster next round 🔥pic.twitter.com/BG5Pz2ZOEz

He went onto slot five more nerve-jangling frees to help his club to a one point victory over Cross.

As for John McEntee, it was a very unusual situation for him, plotting the downfall of the club for whom he's won so much. The tone of his voice afterwards showed it killed him to do it, but he's a competitor too and Clontibret bounce on.

And it's clear by the tone in his voice here that it killed him to do it.

The swings and roundabouts of the club championship.


popular
'Make him hurt, make him yours' - How the Springboks ruled the world
In 86 seconds, Patrick Bamford becomes English football's voice of reason
Springboks legend Tendai Mtawawira tells us what he really thinks of Ellis Genge
"We did find him hours later and we made up." - How Flynn and his best friend came to blows in Croke Park
'Beast' Mtawawira is a big fan of Mike Ross' Lions front row
Jose Mourinho is about to step up and become the hero football needs
Furious Gary Neville tears into "scavengers" Glazers for Super League plans

You may also like
10 months ago
Umpire Garland taking learnings and criticism from behind the goals
1 year ago
You'd love to have Niall Kearns on your team
1 year ago
Magheracloone: Back from the brink
1 year ago
How Monaghan club recovered from losing it all in a tale of determination and unity
1 year ago
Ciaran Thompson's joke of a left peg shows Naomh Conaill can do it every way
1 year ago
Penalties the name of the game but surely there's a better way
Next Page