No better man to pull it off.

It's not too often you get a towering corner forward but David Clifford is no whippet pushing 6ft 2.

So nippy, jinky and skilful, it's easy to forget that the Fossa club man blends all of these technical qualities with a rangy physical presence.

And that's what sets him apart.

Because with a sizeable frame like his comes its own challenges - many taller players struggle with their balance and acceleration and wouldn't have as sharp a step as your typical smaller player - but to Clifford's credit, he has mastered all of those and is easily one of the most elusive inside forwards in the game.

Sunday was just another one of those days where, if given more ball, Kerry's target man could have totally went to town - but even being starved - he still made a fair bit of hay out there. 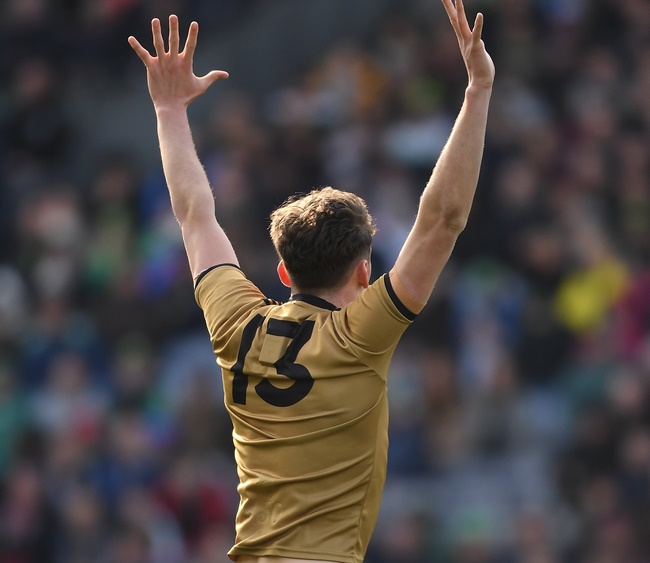 Colm Parkinson was at Croke Park for the League final and the GAA Hour Show host noticed an evolved slickness in Clifford's soloing technique - which is one of the reasons he's almost impossible to dispossess.

"He has a very unique soloing style Clifford. Because he's such a tall man, he's evolved - probably because he's been tall all of his life - he's realised that 'if I solo it up, I'm going to get it tapped away'... So he actually puts his hands right down towards his foot and only solo it up about a foot.

"Isn't it bizzare that he's had to evolve because he's so tall, to almost an awkward solo, having to do that, to avoid being tackled," continued Wooly.

And if you watch Clifford's run to set up Gavin Crowley's early goal, you'll see exactly what Parkinson is talking about. The Young player of 2018 drops his hands low and brings his foot high to make the solo as snappy and as sharp as possible.

This is a contrast to his teammate Tommy Walsh, who was dispossessed a number of times on Sunday with his looser, more lobbed soloing technique.

"When you contrast it to Tommy Walsh who can actually move as well, but he's soloing it well up in the air so he's easy to dispossess. Clifford has realised that, 'I'm corner forward so I need to completely readjust this solo so that the likes of Harrison can't get a hand in."

"He's having to adjust to play like a smaller guy and you can see it at times, when he goes out the field and takes off on some of these runs, you realise this fella can move then..."

"When he's inside, he doesn't look as nippy as some of the smaller guys off the mark and that but he always manages to get his shot away, he doesn't get dispossessed. His skill level is very, very high."

You can listen to this Clifford discussion, and much more from Monday's GAA Hour Football Show.


popular
James Haskell on text exchange with Peter O'Mahony after Ireland's victory over Scotland
Can you name every English football club that begins with 'W'?
The SportsJOE 12 o'clock quiz | Day 105
Ronan O'Gara shares class Johnny Sexton story ahead of World Rugby awards
The SportsJOE 12 o'clock quiz | Day 103
"The academy boys have turned into small monsters over the past few weeks" - Peter O'Mahony
"Shane was just gifted. He could play centre back, centre forward, he had everything"
You may also like
2 weeks ago
"He was a nightmare to play against...you were just a sitting duck"
2 months ago
Closed doors no issue for O'Brien
3 months ago
"I'd play 18 holes of Pitch n Putt" - Jack O'Shea's All-Ireland final prep pure class
3 months ago
St Patrick's day memories: Rural Caltra with one of the great underdog triumphs
3 months ago
"I was kind of going 'I'm not a Kerry player" - Donaghy's story a brilliant watch
4 months ago
Mayo issue update on crunch Allianz Leagues clash with Kerry
Next Page