And that's why, having beaten Kerry to claim their second All-Ireland senior ladies football title in a row, no matter where you looked and no matter who you talked to, there were wide smiles and there was emotion. You could sense a quiet satisfaction in the Meath air on Sunday night.

As Orlagh Lally, one of their two AFL-bound players says, they didn't have anything to prove to anyone but they did want to prove something to themselves. And when you do that, in sport and in life, it's fair to say that there are few better feelings. 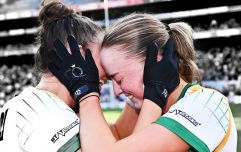 END_OF_DOCUMENT_TOKEN_TO_BE_REPLACED

And that was exactly what they did.

The fact that Lally and Wall are heading away, bound for Australia to join the growing Irish AFLW contingent, it only added to the emotion of the whole thing and though this was another triumphant day, you still couldn't escape that sense of a band breaking up.

Eamonn Murray couldn't hide that in his post-match interview and he certainly couldn't hide it later on, when he chatted to Marty Morrissey in what was a lovely interview from the Meath team hotel.

END_OF_DOCUMENT_TOKEN_TO_BE_REPLACED

"All my friends were there, family, the whole county was out. It's for them as much as us. It's great to see a plan work out, and it did work out."

Murray has spoken out about in the past about the AFLW and there's no denying the fact that, not too far from now, and with its best players going away because of it, ladies football will reach something of a cross-roads. But last night wasn't the night for it and the sight of an emotional Murray, stood in between Wall and Lally, the two of them propping him him up, there and then, the bond that this team have was plain for all to see.

A really lovely moment that sums up how close this Meath team arepic.twitter.com/gik0Qyc7YK

END_OF_DOCUMENT_TOKEN_TO_BE_REPLACED

"Being involved with such a great group made it very tough to leave but it's a chance at professionalism and a chance to experience new things," added Vikki Wall, who has signed a contract for the North Melbourne AFLW team.

It was almost a case of if you don't laugh, you'll cry and Wall and Lally and Murray took the whole thing brilliantly.

"Eamonn's a big fan of the game!" said Wall.

"And he's made his opinions clear, so he's delighted to see us going, aren't you Eamonn?

"I am indeed. It's a great sport to watch!" he said tongue firmly in cheek.

"Of course I'm disappointed, I'm heartbroken but sure I'd still wish them the best."

After the game, Murray had explained the battles they'll face in the future without the two girls and with the potential of more following them.

“That’s why it is a bit emotional for us all, it won't be easy."

“Losing players and stuff, you’re probably good enough to win three or four in-a-row but we won’t, but we’ll worry about that next week.

“I won’t worry about that (now), they have two All-Irelands in their pocket. They will go with pride and their head up, and we wish them luck. And we look forward to them coming back, and they will be back. I know they will.”


popular
"He can add something to our attacking line up" - Jamie Clarke signs for Northern Irish soccer club
Antonio Conte 'banishes' four Tottenham players from first-team
Ranking the best county GAA songs of all-time (32-1)
Barcelona allowed to register four new signings, but Jules Kounde misses out
"I’ve never heard someone say something as stupid” - Katie Taylor blasts Jake Paul's rematch comments
Roy Keane makes three surprise picks in Man United's greatest Premier League team
"It was unfair on the Galway backs” - Tomás Ó Sé admits that Kerry benefitted from unfair rule
You may also like
1 month ago
Emma Duggan saves Meath with outrageous buzzer-beater in All-Ireland quarter final
2 months ago
“Monaghan had 15 players behind the ball and only for Stacey on the frees, it was awful to watch." - Murray calls a spade a spade after awful game
2 months ago
Outstanding Goldrick gives Dublin the bragging rights against Meath
2 months ago
“You don’t want people thinking that it was a one-time thing" - McGuirk gunning for more glory
4 months ago
"There’s no problem, they’d train seven nights a week if you asked them." - Meath are no flash in the pan
4 months ago
Niamh O'Sullivan gives a lesson in forward play with genius movement for Meath goal
Next Page