Australia, welcome to the world of solo dummies.

It's a terrifying world, to be honest. You live in fear every day knowing that it could be you. You could be the one who's sold at any moment and you could be the one to have your ankles broken at any turn but you have to push past this because it's about to get so good.

That conor mckenna fake kick was the best thing I've ever witnessed.... and I hate essendon

Essendon finished mightily strong in the AFL on Friday and blew Adelaide Crows out of the water in the fourth quarter to come from behind and win 96-75. At one point, they were 30 points in arrears but finished with 21 to spare - a 51-point swing - to keep them in the hunt for a place in the finals.

The Eglish club man wasn't on the scoreboard but finished the evening with 24 disposals and took the plaudits of the entire country when he produced the moment of the night and a rare moment for the sport.

Coming down the right flank, the half back saw poor Lachlan Murphy charging in and he set him up devastatingly for a trip to the shops.

Adelaide's Murphy attempts to block McKenna's wound-up right boot only for the oval ball to disappear, back in the clutches of the cheeky Tyrone man, who rounds him and picks out a pass as Murphy is left with a shopping list and shaken ankle. 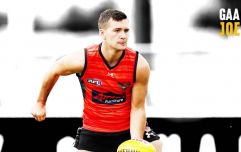 END_OF_DOCUMENT_TOKEN_TO_BE_REPLACED

Tyrone fans are no strangers to a piece of magic like that, the elusive shape of Stephen O'Neill etched in their memories.

And, more recently, the Red Hands have kept up that carry on.

In the league a couple of years ago, Mark Bradley unleashed hell on Colm Boyle.

And Lee Brennan did the same to Mick Fitzsimons with a different method.

They famously talk about that Tyrone cockiness, the self-belief. Conor McKenna is Down Under a few years and he's not only daring to be audacious, he's introducing new skills to the AFL.


popular
The SportsJOE 12 o'clock quiz | Day 134
"It's not about winning at underage. It's about building players and building people"
"Me and him used to room together, and he was a bit of a nightmare"
Excitement in Mitchelstown as Cork man set for AFL debut at 20
The SportsJOE 12 o'clock quiz | Day 133
A starting XI of the best free agents available this summer transfer window
PIC: Rugby league star deletes Twitter after scorned girlfriend posts infidelity photo
You may also like
5 months ago
"You grow as a person off the back of injuries...I always had the answer that drove me"
5 months ago
Mickey Harte and Tyrone revitalised as McShane stays put
1 year ago
Derry gem runs from his own half and kicks stunning goal from 50 metres
1 year ago
Colin O'Riordan's Swans teammates swarm him as he kicks first goal for Sydney
1 year ago
Geelong's welcome video for Kerry star shows how much attention the AFL is paying
1 year ago
Tomás Ó'Sé takes another swipe at AFL's recruitment drive in Ireland
Next Page