This lad will be some loss to Limavady.

He'll be some loss to Derry too.

Callum Brown is heading Down Under. The 18-year-old has turned plenty of heads in Derry in the last couple of years but unfortunately for the Oak Leaf county, his exploits have earned him admirers from abroad too.

The Sydney Giants have been watching, they've been watching closely and they've gotten their man now. Brown, of African descent, has joined the giants and he becomes the 14th Irish man on the AFL list for 2019. 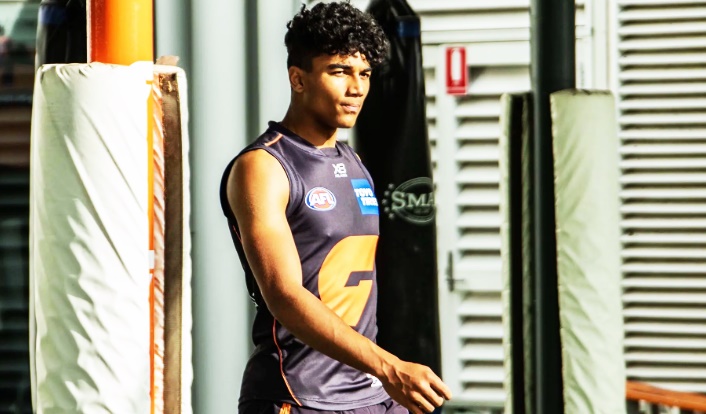 In fairness, Callum Brown looked tailor-made for an AFL move from the minute he got the chance to show what he was made of in a Derry jersey.

Somehow, he didn't start on the Derry minor team for their All-Ireland final against Kerry in 2017 but he came on, caught a few skyscrapers and ruffled Kerry feathers.

That got the whole of Derry talking about this lad. He was fast-tracked into the county's senior team only to be told hours before a McKenna Cup game that he was too young to play.

He wasn't too young for under-20s. He went on and ripped it up for his county on their Ulster winning run, before breaking Mayo ankles in the All-Ireland semi-final too on his way to the goal of the competition.

In the GAA we call that breaking an opponent's ankles. Brown had to explain the term ankle-breaker to his new management on arrival.

"I didn't quite understand what he was talking about when he talked about breaking a guy's ankle, but that's their terminology when they wrong-foot someone," McCartney told AFL.com.au with a laugh.

Exhibit A is above.

Athletic, strong and quick, Brown is a 91kg, 181 cm specimen who's well able to throw that weight around too.

You may also like
3 months ago
Play on Sean
3 months ago
GAA Hour | Derry v Cork 1993 All-Ireland final
5 months ago
Slaughtneil: The stuff of GAA dreams
8 months ago
Chrissy McKaigue and Neil McManus sleeping rough for the homeless
1 year ago
Derry gem runs from his own half and kicks stunning goal from 50 metres
1 year ago
List of every county footballer with transfer confirmed to America this summer
Next Page