Not one man took a step back in a Tipperary county final that, through heart, guts and sheer determination, Loughmore-Castleiney endured to win by the narrowest of margins.

The first half was a cagey affair but by the time referee John McCormack blew his final whistle to signal that this marvellous mid-Tipperary club had won the senior hurling and football double, Semple Stadium, for the second time in seven days, was rocking like the colosseum. 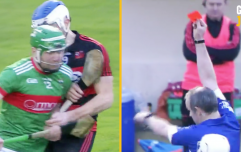 END_OF_DOCUMENT_TOKEN_TO_BE_REPLACED

For the second time in seven days, Loughmore-Castleiney were champions of Tipperary.

Inside, there were men down all over the place, there were tears in the eyes of Thurles and Loughmore people alike, there were kids doing knee-slides and inspired by the power of it all, there were adults jumping up and down. This was one of the best county finals you will ever watch and this was Loughmore-Castleiney at their unrelenting best.

There were many times during this 65 minute arm-wrestle when, with bad breaks like Thurles' second goal going against them, Loughmore-Castleiney could have doubted themselves and they could have thought here we go again. But for the second time in seven days, for the 17th time in 17 weekends, they went to the well and they came back with the win.

Noel McGrath celebrates with his father Pat after captaining @Loughmore_Gaa to the Tipperary senior hurling championship.

That is fantastic stuff. pic.twitter.com/TRLtZLBOhN

It was guts, it was stomach and it was courage for a finish as, with Thurles Sarsfields throwing everything and the kitchen sink at them, Loughmore just wouldn't wilt. It was exemplified by Ciaran Connolly's engine in midfield, John Meagher's power at centre back, Liam McGrath's hassling up the wing. We could stay going but there's no point because, his voice trembling with the emotion of it all, we couldn't sum it up as well as Brian McGrath did on Tipp FM at the final whistle.

END_OF_DOCUMENT_TOKEN_TO_BE_REPLACED

"I'd do it all again. Everything we've gone through, last year. I'd do it all again. As Noel said in his speech, it's his proudest moment and I'm absolutely delighted for him. There's no-one else deserves that more. By God, to play with them lads there week on week, it's so enjoyable and I absolutely love it."

This interview, Brian McGrath's voice trembling with the emotion of it all, is the GAA at its best.pic.twitter.com/8atnsh3XsX

It was this passion, this camaraderie and this will that inspired them when the going got tough. It doesn't get much tougher than it was for a finish as, with players from both sides running on adrenaline, a good 40 seconds passed with 20 players hunting down a little white ball lost in a ruck. Thurles didn't die. Loughmore didn't die. John McGrath eventually won the breaking ball and it was fitting, after the finest dual club championship campaign known to man, that he pucked the last ball of the day.

Loughmore-Castleiney have done it again.


popular
Craig Casey and four Leinster stars feature in French scouting report for Six Nations
The four unluckiest players to miss out in our predicted Ireland squad
Xavi left ‘nearly speechless’ after seeing Dembele wage demands
Peter O'Mahony delivers powerful Ashling Murphy tribute after Munster win
Man United squad: The players the club should keep and the players they should sell
Roy Keane names just three Manchester United players he would definitely keep
Australia confirms Novak Djokovic is banned from country for three years
You may also like
1 month ago
Busy weekend ahead for the most marvellous family tree in the GAA
2 months ago
Late drama in Tipperary as Ballyea win without Tony Kelly
2 months ago
Bonnar brings back Inter-divisional trials in Tipperary as club players given every chance
2 months ago
"We're back. And we're back on the double" - Passionate Loughmore-Castleiney manager sums up spirit in the club
3 months ago
"I'll go back running the roads now and make sure my body doesn't get lazy"
3 months ago
All 15 Limerick starters nominated for All-Stars as Cody looks set to match Eoin Kelly's feat
Next Page