Bernard Flynn got punched, broke bones, lost teeth, then Sean Boylan blew the whistle and Meath training was over.

The punishment from plucky opposition corner backs was another thing but nothing prepared Flynn, Meath's livewire forward, for the biggest blow of his life in September 2010, when the bank called in their loans and his estate agent's business went to ground.

Flynn shies away from none of it during his Laochra Gael tribute show which, as he says himself, documents 'the good, the bad and the ugly' of his eventful life. On Thursday's GAA Hour Show, the St Colmcille's club-man chats with Colm Parkinson about his iconic career and first of all, about that 2010 knock-out, when his whole life flashed before his eyes.

"The toughest part is probably the moment after it all happens and you've to look people in the eye and tell them. I probably hid away for a week or two but eventually I met them, stared them down and got on again," Flynn says.

"I built a substantial business from nothing and I was so proud of it but when that crash came, literally, it's like a tsunami, overnight, the bank calls in their loans and close in on you and you lose your business. That was pretty horrific.

"I'm a big believer in owning your losses as well as your wins. I'm from the school of thought that you have to get back on the horse again and try get going. It wasn't easy. There's no feeling sorry or stuff like that because even though there are scars, you just have to get going again.

"I would be strong in adversity, but listen, I had my dark days, my tears, lonely days and my sleepless nights. My wife and kids were phenomenal through it all. Luckily, I never really cared of what anyone said about me and that stands to you in that sort of situation..."

Bernard Flynn on the good, the bad and the ugly in his Laochra Gael tonight 🟢🟡

For a sucker-punch like that, you could say that Flynn was better-prepared than anyone. The Meath dressing room was no place for soft touches when he walked in the door and as a self-confessed pretty boy, Flynn was never spared by the big, bad wolves. 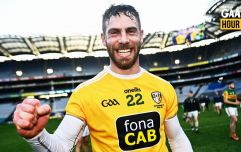 "In hurling, the system really works. The Leagues are structured well and so are the championships"

END_OF_DOCUMENT_TOKEN_TO_BE_REPLACED

"Savages is probably a nice name for those lads!

"The likes of Mick Lyons, Gerry McEntee, Colm O'Rourke, Liam Harnan these guys," he continues, "I wouldn't say they particularly liked me at first, I might have had a bit of gel, bit of brylcreem in the hair - these guys didn't even know what deodorant was! I'd bring stuff in my bag, I might have been ahead of my time, I was like something out of mars with white shoes, change of clothes after a match and so on as a young fella 18/19..."

"But they knocked the living shit out of me at training and they sorted me out very quickly, I can assure you of that!"

A skinny whippet of a lad when he was first called in at 19, through the school of hard knocks, Flynn learned how to mind himself. His best weapon of all, however, a weapon that could conquer many evils was his ability to kick not just off his right foot, but off his left foot too.

"I was scrawny, skinny, 10 and a half stone, but you had to find your own mechanisms to survive. There was no real gyms those days, I just did the basic stuff. Press-ups, a few old weights, sit-ups and pull-ups. It was basic stuff. My diet was shite when I went in there first, but seven days a week, I practiced! If I didn't have two feet at the time, I would never have got near the team at all. I have no doubt about that, no doubt at all. By the time I was 12/14, it didn't matter which foot it was and that stood to me, it got me out of so many holes throughout my career..."

'I broke a bone..for 7 or 8 minutes i couldn't breath' - Bernard Flynn

"I probably shouldn't have made it onto that team because I was against everything they stood for really, but they had patience with me and thankfully they did..."

In the life and times of Bernard Flynn, there are lessons there for everyone.


popular
Names beginning to emerge from Lions stand-by list for South Africa
The SportsJOE 12 o'clock quiz | Day 351
"I'd play it in the back garden if I could. We've been training for this since last September"
Player ratings as Man United and Liverpool play out goalless draw
"I’d love to do my Colin Corkery impression and play Junior B football. It depends on the body"
Player ratings as Liverpool beat Man United at Anfield
"Some people just have different passions" - Geezer sees where Clarke is coming from

You may also like
5 hours ago
It took a brilliant piece of management from Pat Gilroy to turn over Connolly's 2011 final suspension
3 days ago
"He did a great impression of not caring where the ball was" - Casey's movement a sight to behold
1 week ago
"I don't feel we have the hurlers for this short-game, or ever did" - Ryan says Dublin best served going back to basics
1 month ago
"Twas often I felt like firing a boot at him' - Micko's words of consolation didn't go down well in Cork
1 month ago
"People would say 'you put in a fierce sacrifice,' but it never felt like that"
1 month ago
"It kind of adds to the ammunition for the people you're playing against."
Next Page