Reports in Italy claim Ibrahimovic apologised to teammates after Tuesday's game, insisting he made no racist comments to Lukaku

Zlatan Ibrahimovic has reportedly assured teammates he did not use any racist words during his heated exchange with Romelu Lukaku on Tuesday night.

The pair went head-to-head shortly before the interval in the Coppa Italia game between AC Milan and Inter Milan, with Lukaku later having to be held back by teammates as insults continued to be traded.

Zlatan and Lukaku are going at it 😳 pic.twitter.com/yMLFI72tiz

END_OF_DOCUMENT_TOKEN_TO_BE_REPLACED

With no fans in the San Siro, some of the audio could be heard during the match coverage, with some viewers believing Ibrahimovic had at one stage told his former Manchester United teammate to "go do your voodoo shit, you little donkey."

Both players received yellow cards for the incident, which took place when Milan were leading through Ibrahimovic's opener. After the interval the Swede was sent off for a second bookable offence with Lukaku equalising from the penalty spot minutes later. In stoppage time, a Christian Eriksen free-kick saw Antonio Conte's men claim victory.

According to Sky Sport Italia, Ibrahimovic later apologised to his teammates for his sending off, also insisting that comments made to Lukaku were not racist.

The same report references comments made by Everton owner Farhad Moshiri at a general meeting in 2018, which suggested the Belgian's decision to reject a contract extension at Goodison Park had been influenced by a "voodoo" message.

"We offered him a better deal than Chelsea and his agent came to Finch Farm to sign the contract," Moshiri is quoted as saying in The Guardian three years ago.

"Robert [Elstone, Everton’s chief executive] was there, everything was in place, there were a few reporters outside, then in the meeting Rom called his mother.

"He said he was on a pilgrimage in Africa or somewhere and he had a voodoo and he got the message that he needs to go to Chelsea." 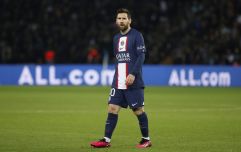 END_OF_DOCUMENT_TOKEN_TO_BE_REPLACED

Lukaku did, of course, end up moving to Old Trafford instead of Stamford Bridge, where his time briefly overlapped with Ibrahimovic.

Though Lukaku later rejected Moshiri's claims, some reports suggest this is what prompted Ibrahimovic's alleged reference to voodoo.


popular
Man United could be blocked from playing in the Champions League next season
Ireland team vs. France: Form players rewarded and a welcome return
French media's opinion of this Ireland team becomes clear as vital clash nears
Lionel Messi makes decision on Barcelona return
Clive Woodward happy to 'eat humble pie' after bold comments about Ireland
"I should have been more mature" - O'Sullivan's injury trail a cautionary tale for Sigerson casualties
Man City expect Pep Guardiola to leave
You may also like
1 day ago
Erik ten Hag refuses to comment on Man City charges
1 day ago
Casemiro explains why his name has been spelt wrong his whole career
1 day ago
Man United vs Leeds: Why the game won't be shown on Irish TV
1 day ago
Man City expect Pep Guardiola to leave
1 day ago
Pierre Emerick-Aubameyang linked with shock move to end Chelsea nightmare
1 day ago
Lawyer heading Man City's alleged rule breaches panel is an Arsenal member
Next Page