Zlatan Ibrahimovic is at it again, ladies and gents.

Turning 38 years of age in a matter of months, the former Sweden international got on the scoresheet for LA Galaxy with one of his trademark acrobatic finishes for Los Angeles Galaxy on Sunday night.

Taking the ball on his chest in a crowded area, the former Manchester United, Paris Saint-Germain and Barcelona striker is forced to flick the ball away from a New England Revolution defender with his right foot.

Hooking the ball up above his head, he is forced to improvise: turning so that his back is to goal, he then fires a bicycle kick into the top corner of the goal.

Sadly for Ibra, the goal didn't mean all that much. 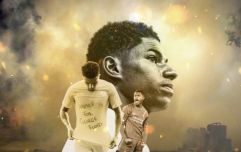 END_OF_DOCUMENT_TOKEN_TO_BE_REPLACED

The Galaxy had fallen behind a minute before half-time to Cristian Penilla's opener. On the hour mark, the Revolution's lead had been doubled courtesy of Teal Banbury.

As spectacular as it was, this goal turned out to be nothing more than a consolation as the Galaxy lost 2-1.

The defeat ended a two-game winning streak for the Galaxy, who now sit nine points behind city rivals LAFC and in second place in the Western Conference.