Xavi perfectly predicted how the Asian Cup would pan out

From the knockout stages onwards, Xavi called every result.

Their run to the final was not foreseen by many, given their lack of footballing heritage and complete absence of past success. But former Barcelona midfielder Xavi, who has spent the past few years playing for Qatari club Al Sadd, saw it coming.

Working as a pundit ahead of the knockout stages of this year's Asian Cup, the Spanish midfielder made his predictions for how every tie would pan out. His assertion that Qatar would meet Japan in the final raised a few eyebrows, but it was he who had the last laugh, as proven by today's result.

Xavi correctly predicted Iraq, Japan, China and Iran to make it through to the quarter-finals on one side of the draw, as well as South Korea, Australia, the United Arab Emirates, and Vietnam from the other side. 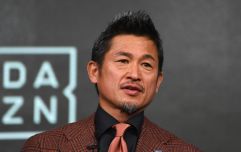 END_OF_DOCUMENT_TOKEN_TO_BE_REPLACED

The most surprising result of the quarters was Qatar's win over South Korea, which was a massive relief to Tottenham Hotspur fans everywhere, albeit a huge surprise.

Xavi then correctly predicted his current home of Qatar to proceed to the final, swatting the UAE to the side, while Japan beat Iran 3-0.

And Friday's final was the icing on the cake for Xavi, who made everyone who laughed at his prediction look very silly, as his adopted nation lifted the trophy.

So, there you have it. Qatar have become very good at football, very quickly, and will probably go much further than expected when they host the World Cup in 2022, with absolutely no outside factors at play.

popular
SportsJOE 2000s Football Quiz | Round 20
The SportsJOE 12 o'clock quiz | Day 292
Daniel Cormier defends immediate reaction to shock Conor McGregor loss
Joe Rogan heard Dillon Danis insulting Khabib and here's what he said before the fight
Michael Bisping tears into Dillon Danis for 'trying to be Conor McGregor so hard'
"It’s an easier life in goal, you’re not waiting for some fella to give you a box in the jaw"
Six months after Michael Venom Page's flying knee fractured his skull, Evangelista Santos retires
You may also like
1 year ago
South Africa bury Japan with 26-3 win in RWC 2019
1 year ago
Ten men scrums - How Japan plan to counter the Boks' pack
1 year ago
WATCH: Japan enter the quarters with a top-notch 28-21 victory over Scotland in RWC 2019
1 year ago
Details of Ireland's World Cup quarter final with New Zealand confirmed
1 year ago
WATCH: Japan top their group with 38-19 win over Samoa in RWC 2019
1 year ago
WATCH: Japan mount shock 19-12 defeat on Ireland in Rugby World Cup 2019
Next Page