Here is our team of the tournament so far.

We are almost at the knockout stages of the 2022 World Cup in Qatar, and with so much action already under our belts, we have decided to name our team of the tournament so far.

It may be early days, but some players have already stepped up to the mark and grabbed the opening matches by the scruff of the neck.

END_OF_DOCUMENT_TOKEN_TO_BE_REPLACED

We have put together a starting XI, capable of beating any team. What may be more interesting to see in this line-up, are the players who aren't in it, rather than those who are.

Please note that this was written before games were played on Thursday 1st December. 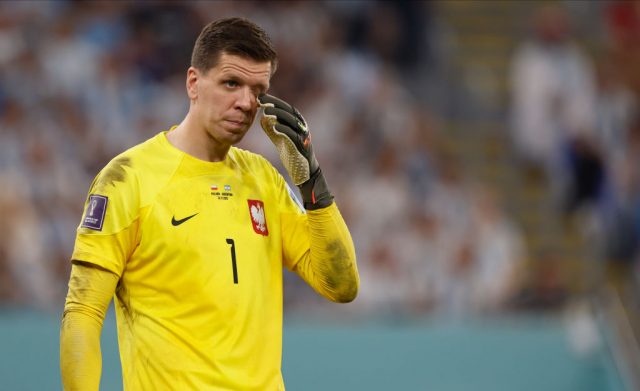 END_OF_DOCUMENT_TOKEN_TO_BE_REPLACED

The Juventus keeper has been the saviour for Poland in this World Cup so far, and that's in a team that contains Robert Lewandowski.

Two clean sheets in the first two games proved to be vital considering that they only made it out of the group stages because of goal difference, and the cherry on top has to be the fact that he saved a penalty from Lionel Messi.

In a Croatia team filled with big stars, it's the Celtic man who has been performing on the big stage so far, with two solid performances under his belt already.

Defensively, Croatia are always hard to break down, but Juranović offers something going forward as well, and has already notched up an assist in the tournament. 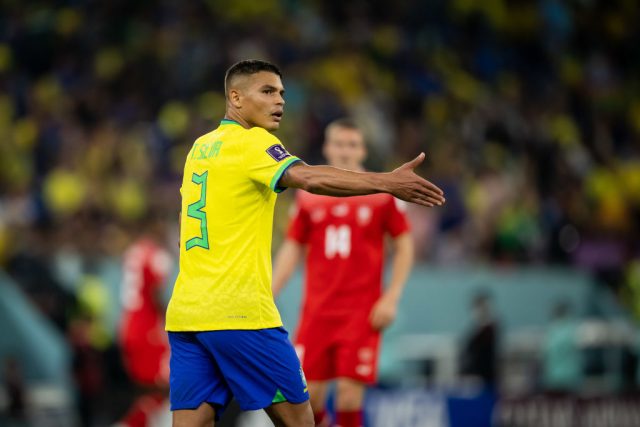 Never mind the fact that the Brazil captain is 38 years old; the Chelsea star has been a rock at the back for his nation.

So far he has over 180 minutes of football played at the tournament and hasn't conceded a single goal.

His influence and leadership skills are clear to see as well, and he is brilliant at keeping a cool head in high pressured moments.

Another Premier League star performing on the biggest stage, and in a team filled with fluent footballing brilliance, Laporte can also do the dirt work when needed.

The commanding centre back has been a key part of the Manchester City defence in recent years, and looks to have brought that form into international level. 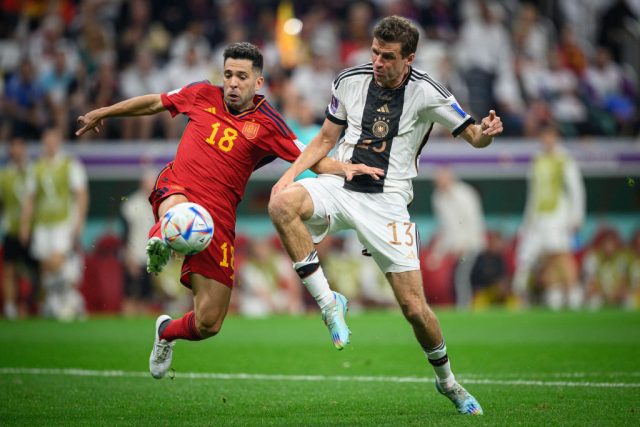 Yet another veteran still performing at the top level, the Spanish left back has gotten two assists so far, and is a constant threat going forward.

A stalwart of this team and Barcelona, the experienced 33-year-old is just as solid defensively as he is offensively, and looks to be a big part of Luis Enrique's plans.

The focus has solely been on Cristiano Ronaldo whenever Portugal plays, but slowly that seems to be shifting towards Bruno Fernandes as he continues to shine in this World Cup opener.

With two goals and two assists to his name already, the United attacker is already being tipped to be Ronaldo's replacement as his country's next talisman. 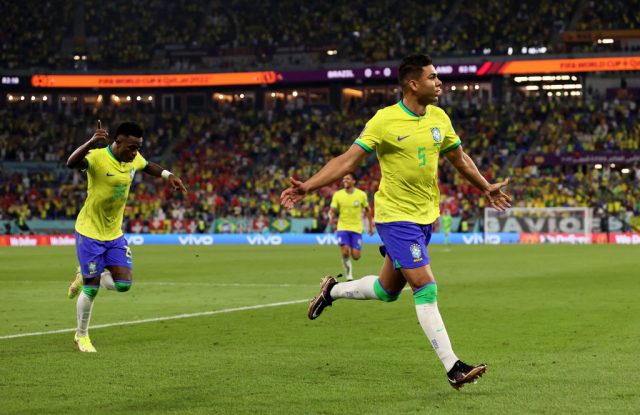 Yet another United player, but it's hard to leave him out of this team because the Brazillian has been fantastic in the early stages of the tournament.

His winner against Switzerland was just the cherry on top of what have been two excellent games so far, and even prompted Neymar to tweet that "Casemiro is the best midfielder in the world".

At just 18 years old, the young Barcelona star has been hugely impressive for Spain at this tournament, putting in two great performances back-to-back.

He became his country's youngest ever player at a World Cup and is now their youngest ever goal scorer as well, so his lack of experience doesn't seem to be holding him back at all. 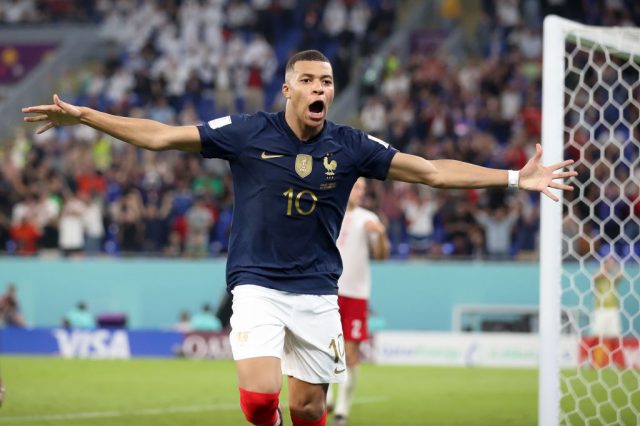 Currently the joint top scorer with three goals to his name, the PSG star has taken the competition by storm.

Even when you take away the goals, the constant threat that he poses is frightening, and every time he gets a defender on a one-on-one situation, he burns them for pace.

Easily the most exciting player on show at the moment.

The big fear going into this World Cup was that they would have loads of creative players, but no real out and out strikers who would be ruthless in front of goal.

Well, Cody Gakpo has been clinical in front of goal, bagging one in every single game he has played so far, and is virtually the difference in his side making it to the knockout sages.

Currently playing at PSV, his World Cup performances will surely attract some huge clubs to come knocking, and a big transfer could be on the cards here. 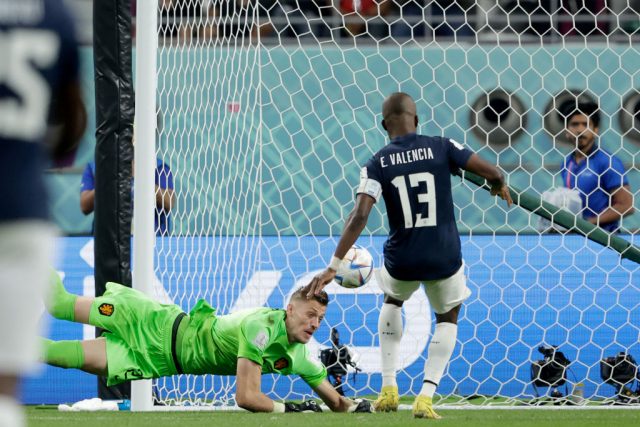 Every World Cup sees an unexpected hero emerge from the shadows, although those in Ecuador would expect nothing less from their talisman.

The former West Ham man has bagged three goals, putting him level with Mbappe and Gakpo on the top scorer's list, so he's not exactly in bad company.

After taking a knock in the first game, many were fearful that he would be ruled out with injury, but thankfully for him, his country, and all of us neutrals who just love watching top footballers strut their stuff, he managed to stay on the pitch for Ecuador's three games.


popular
Ireland vs Wales: All the big talking points, moments and player ratings
Conor McGregor offers solution to Croke Park fiasco that should suit all parties
Conor McGregor hit by car ‘at full speed’ while cycling
Allianz National League Round 2: All the action and talking points
Ireland team to play Wales: Andy Farrell's XV, the big calls and bold cuts
Everton release brutal 59-word statement to confirm Anthony Gordon departure
GAA defends their handling of Kilmacud Crokes and Glen replay saga
You may also like
1 day ago
The SportsJOE Friday Pub Quiz: Week 9
2 days ago
Even Roy Keane felt Michael Dawson went too far with his remark to Tom Heaton
2 days ago
Chelsea fire back and clear up why Hakim Ziyech's PSG move collapsed
3 days ago
The four players offered to Man United before they decided on Marcel Sabitzer
3 days ago
Police called to Roma midfielder Nicolo Zaniolo's house after he misses training
3 days ago
Ireland set for 82,000-seat World Cup opener as Arsenal reject huge Katie McCabe bid
Next Page