World Cup 2022 Day 20: All the major action and talking points

Thank God football is back.

Welcome to day 20 of the 2022 World Cup in Qatar as the quart finals officially kick of this evening with games at 3pm and 7pm.

It's been two long torturous days without football - it really does take you by surprise how quickly we have all adapted to the non stop action and just how spoilt we were.

END_OF_DOCUMENT_TOKEN_TO_BE_REPLACED

Today, we get more than our fill as the dancing Brazilians take on the classy Croatians in the first game of this round, and it promises to be a cracker.

Brazil were in full flowing samba scoring form earlier in the week, while Croatia managed to dig their heels in and get through o penalties yet again. 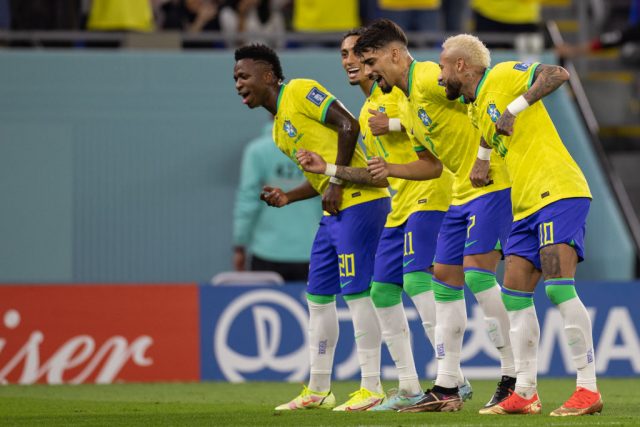 Gary Neville has said that Brazil have been the best team in the tournament so far, but this is definitely the toughest challenge that they have faced yet.

END_OF_DOCUMENT_TOKEN_TO_BE_REPLACED

In the evening we have the scintillating Lionel Messi back in action, and against Louis Van Gaal's rigidly organised Netherlands team.

If Messi scores in this game he will equal Gabriel Batistuta's record as top scorer for Argentina at a World Cup, and just by taking the field, will have the second most appearances ever in the tournaments history.

Although he has still been able to produce moments of magic, there's no denying that the rest of the team has been rather average, and if you want to beat Virgil van Dijk and CO, then you need everyone firing on all cylinders.

Check out all of the latest news, scores, and results here:


popular
Everton release brutal 59-word statement to confirm Anthony Gordon departure
Five confirmed changes and guidelines to have big impact on 2023 Six Nations
"Every team did it!" - Paul O'Connell on Roy Keane comment to Ronan O'Gara that he couldn't deny
"It's crazy to think Bundee Aki might come straight in and start against Wales"
Owen Farrell praises Johnny Sexton in revealing interview ahead of Six Nations
British publication urges Gareth Southgate to claim Evan Ferguson for England
"I think Tyrone are going to go down this year" - O'Sullivan unimpressed by 2021 All-Ireland champs
You may also like
2 weeks ago
Tyrone manager labels David Clifford as 'Messi of Croke Park'
3 weeks ago
Carlos Tevez explains why he didn't contact Lionel Messi after the World Cup
3 weeks ago
Sergio Aguero reveals that his World Cup celebrations wound Lionel Messi up
4 weeks ago
The 10 best footballers of all time* have been revealed
4 weeks ago
Al-Nassr coach admits he wanted to sign Messi before Cristiano Ronaldo
1 month ago
Cristiano Ronaldo's Al Nassr contract contains World Cup clause
Next Page