Wolves linked with move for highly rated Serie A midfielder

What a midfield the Wanderers could have in Feb

Wolves are being linked with a move for one of Napoli's highly-rated midfielders.

But, due to Napoli's playing a 4-4-2 for most of the season, has still only made 10 appearances. Not enough for a player of his quality and is thus considering a move. Wolves have reportedly made a bid, but Fiorentina are also interested.

Aurelio Di Laurentiis, Napoli's president and notoriously hard bargainer, is said to be demanding a fee in the region of £35m. 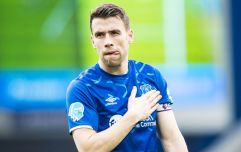 END_OF_DOCUMENT_TOKEN_TO_BE_REPLACED

Diawara is thought very highly of in European football and a partnership in Wolverhampton with Neves and Moutinho would make for a quite ridiculous midfield, particularly for a newly promoted team.

The 21-year-old featured heavily under Maurizio Sarri but has had less luck with replacement manager Carlo Ancelotti.

popular
Eric Dier calls Dele Alli on his tantrum in All Or Nothing changing room row
Sean Kelly sums up emotion of a nation as Sam Bennett all but sews up the green jersey
SportsJOE 2000s Football Quiz | Round 16
"I've always said I'll go back and play. I'll 100% play with Portlaoise again, and I really want to play for Laois"
The SportsJOE 12 o'clock quiz | Day 181
The Tipp minors who beat Dublin's golden generation: the ones that got away
The Alby Mathewson speech that lit a fire under Ulster
You may also like
1 year ago
Matt Doherty suffers injury setback ahead of Europa League qualifiers
1 year ago
Matt Doherty promises to respect title race when Wolves travel to Liverpool
1 year ago
Does spending in the transfer market improve your chance of survival?
1 year ago
Matt Doherty's goal and assist not enough to get Wolves through FA Cup semi-final
1 year ago
Ole Gunnar Solskjaer's classy gesture before Wolves clash went unnoticed
1 year ago
Gary Lineker mugs off Paul Ince over Solskjaer claims
Next Page