Wilfred Ndidi is the best defensive midfielder in the Premier League

So you think N'Golo Kante is the best DM in England?

Well, the stats paint a very different picture indeed. N'Golo Kante was an absolute revelation during Leicester City's miraculous 2015-16 title-winning season, putting in absurd numbers in terms of tackles (4.7 per 90), interceptions (4.2 per 90) and even an impressive number of dribbles (1.6 per 90).

But since then, his numbers have steadily declined or plateaued. Meanwhile, back in 2017, Leicester City signed a man by the name of Wilfred Ndidi as the replacement for Kante who subsequently signed for Chelsea the following season. Since his arrival, he has put up solid defensive numbers but this season, his numbers have escalated to another level, surpassing that of even Kante.

On Sunday, sixth-placed Crystal Palace take on high-flying third-placed Leicester City. Both teams are enjoying superb starts to the season by their standards, given that Palace and Leicester finished 12th and 9th respectively last year.

Leicester are in stellar form right now –  just ask Southampton. After smashing a record-breaking nine goals against the Saints in their last game, Brendan Rodgers's men are genuine contenders for a top-four finish this season. And one of the players who's been key to that success? None other than the current best CDM in the league – Ndidi.

Here are some of his cracking numbers this season:

In all of the above metrics, he has bettered Kante this season. And to top it off, he's still managed to contribute at the other end with two goals in nine appearances so far. All his efforts have helped Leicester concede the joint-fewest goals in the league alongside table-toppers Liverpool despite losing Harry Maguire in the summer. According to Footystats, below is a comparison between the two teams – 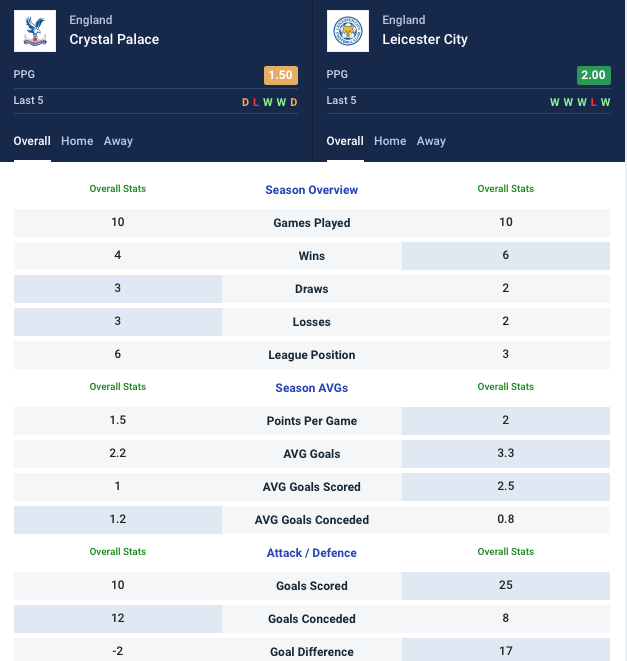 END_OF_DOCUMENT_TOKEN_TO_BE_REPLACED

Roy Hodgson's Palace are a respectable side and are capable of beating the best in the league on their day. In 10 games so far, they've managed four wins and three draws which includes a win over Manchester United in August and a draw against Arsenal in their most recent outing. All this has helped place them above more established teams like Tottenham and United in the table. However, for all their form, they are no match for the Foxes who are right now, the third-best team in the country. In 10 games so far, they've lost just two games, both by a solitary goal.

In addition to their stout defence, only Manchester City have outscored this Leicester side (25 goals). According to stats compiled by Soccerway, below is a list of the top scorers and assisters for both sides: 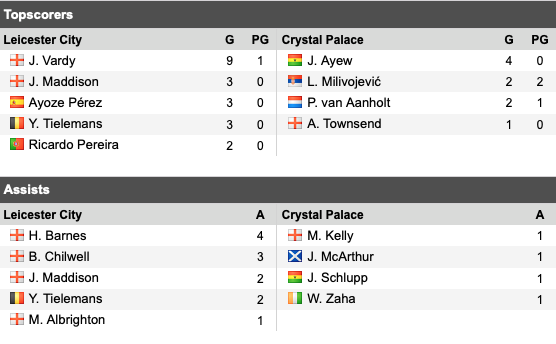 The chart makes it clear that not only do Leicester have more goal scorers, but they also have a higher number of goals and assists being contributed by their squad than Palace.

The stats clearly highlight that Leicester scores more, concede less and win more points per game compared to The Eagles. We expect more of the same to continue on Sunday when the two meet. Right now, given their blistering form, Leicester will be expected to roll over Palace and clinch three points without much difficulty, which is why we recommended them as your pick despite Palace's plucky attitude and form.

Brendan Rodgers has done a fantastic job with Leicester City since he joined as head coach eight months ago. The team are playing like a side rejuvenated and has been freshened up with all the right signings. Jamie Vardy is the league's top scorer (nine goals) at 32 and has a fantastic supporting cast to aid his goalscoring exploits. While Palace did well to keep Wilfried Zaha among their ranks following interest during the transfer window, he has failed to get going this season with just one assist to show for his efforts and the team has suffered with only 10 goals scored in 10 games.

The last time these two sides clashed, Palace ended up winning 4-1 at the King Power stadium and The Foxes have only won one game in their last five trips to Selhurst Park. Nevertheless, Leicester should easily come out on top here and grab three points without much difficulty. 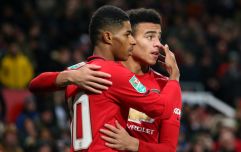 END_OF_DOCUMENT_TOKEN_TO_BE_REPLACED

The league's last-placed team play host to Frank Lampard's youthful Chelsea side on Saturday. Watford are in a woeful state – they haven't won a single game in the league, they have the third-worst defensive record with 21 goals conceded, they've scored a total of five goals and they've earned just five points after 10 games.

Chelsea meanwhile are on fire – they're on a seven-game win streak in all competitions and have won their last four in the league. What's better is that they've managed to do this with a relatively inexperienced manager and squad. Additionally, after a few weeks of acclamation, Christian Pulisic grabbed a perfect hat trick against Burnley to open his Chelsea account in style leaving The Blues with a number of in-form attackers right now including Willian, Abraham and Mount. Additionally, Fikayo Tomori appears to be a gem at centre back and is playing with a maturity far exceeding his 21 years.

With so many players in stellar form, it's nigh on impossible to see anything but a Chelsea victory and possibly carnage ensuing at Vicarage Road. The 8-0 thrashing at the hands of Man City will still be fresh in the mind and if Watford aren't careful, Chelsea could run riot against The Hornets.

Everton are in a bit of a pickle. After spending over £100 million in transfers over the summer, Marco Silva's side find themselves just two points above the relegation zone. The Toffees have lost five of their last six league games and none of their summer signings has proved to be worth the money expended. Any pre-season hopes of securing a European place are all but quashed and Everton would do well just to recover from their current slump and finish clear of the drop zone.

Tottenham meanwhile have lost four of their 10 league games and are winless in their last three leaving them 11th in the table. Their form this season has been a far cry from past seasons but Harry Kane and Son Heung-min continue to provide a spark in attack, scoring or assisting 11 of the team's 16 goals between them.

Despite their shaky form, Pochettino's men should have enough firepower to get three crucial points against Everton. When these two sides clashed last year at Goodison Park, Spurs ran out 6-2 winners but it would be hard to see a repeat of that scoreline.


popular
"If Murray is playing that first half for England, he's probably Man of the Match"
Jacob Stockdale and Johnny Sexton not spared by English press
Baz & Andrew's House Of Rugby - Twickenham carnage
Triple Crown wrenched away as England scrape Ireland off their boots
'Were they up for it more than us? That's my responsibility' - Andy Farrell
ROG hits the nail on the head assessing Ireland's performance
Tyson Fury reveals what happened when he sparred Anthony Joshua
You may also like
1 day ago
Baz & Andrew's House Of Rugby - Twickenham carnage
2 days ago
"Next thing, all I see is this 'BANG' coming in over me... It was O'Driscoll"
3 days ago
"Emotions will be charged" - Sean O'Brien backing Ireland for Triple Crown
4 days ago
Guinness Pro14 Preview: Ulster v Cheetahs
4 days ago
Guinness Pro14 Preview: Edinburgh v Connacht
5 days ago
Baz & Andrew's House of Rugby - Live in Dublin with Scott Fardy and Fiona Coghlan
Next Page