"I know it sounds daft; one international game, 20 years old, but we will miss him tomorrow night."

The young prospect who put in a man of the match performance against England on Saturday night, will now have to isolate for 10 days, meaning he misses Scotland's crucial game against Croatia.

Speaking to Sky Sports News, former Liverpool and Scotland legend Graeme Souness reveals the effects this will have on the team.

"It's an enormous blow for him, but what a blow for the nation. Just when things were looking good, we are playing good football, he was the star of the show, so for this to happen, it knocks us sideways.

"That trio - Callum McGregor, John McGinn, Billy Gilmour - the other night were fabulous. They were good on the ball, they hunted it down, and they looked a really strong three in there, so this is an almighty blow for us. 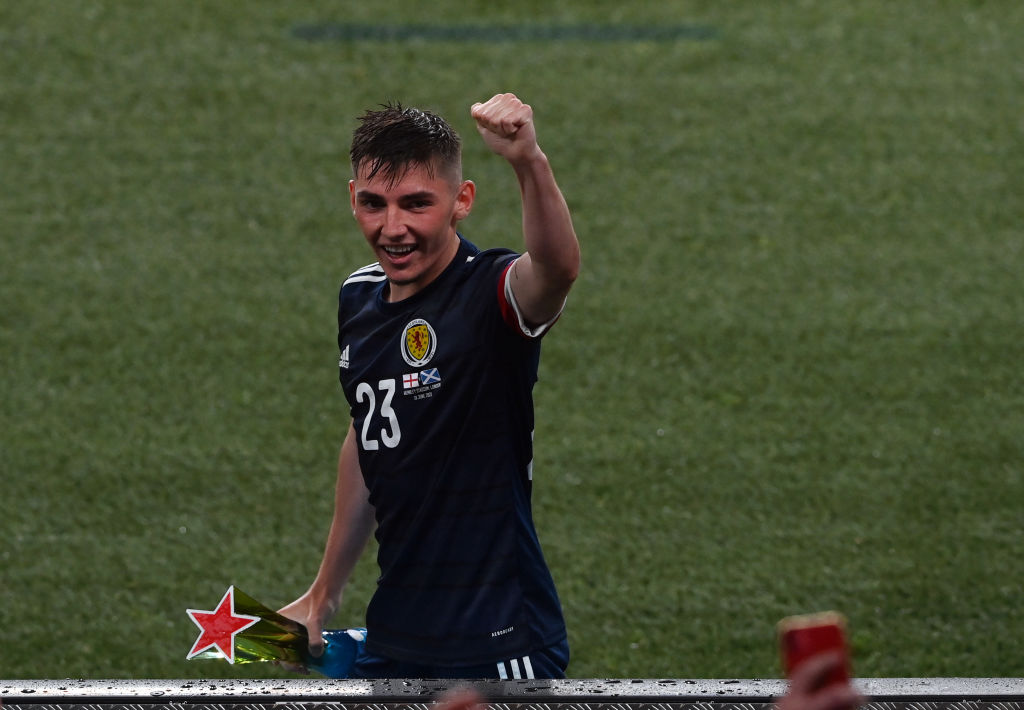 LONDON, ENGLAND - JUNE 18: Billy Gilmour of Scotland celebrates as he walks off after being awarded with their Heineken "Star of the Match" award after the UEFA Euro 2020 Championship Group D match between England and Scotland at Wembley Stadium on June 18, 2021 in London, England. (Photo by Facundo Arrizabalaga - Pool/Getty Images)

"For a 20-year-old - what a debut. he worked his socks off. He's only had five starts for Chelsea in the Premier league this year, so I was thinking he was going to blow up in the second half.

"He's obviously got a very good engine, he kept going and obviously going into that game, young players and even senior players, burn themselves with nervous energy, but he showed no signs of that.

Graeme Souness gives his reaction after Chelsea's Billy Gilmour is ruled out of #SCO's game against #CRO after testing positive for Covid-19.pic.twitter.com/1fYiaZBwC9

"He kept going for the 90 minutes and the football he played, with the pressure on that team, was quite outstanding. What a player he's going to be going forward. [He] keeps the ball in tight spaces, his first thought is to get the ball forward into strikers and he's not scared to get involved in the meatier side of the game for someone so slight.

"He's an enormous prospect for us and it's an almighty blow, we will miss him. I know it sounds daft, one international game, 20 years old, but we will miss him tomorrow night."


popular
Roy Keane's issue with Argentina star could rival Graeme Souness and Paul Pogba
Roy Keane cracked up Ian Wright and Gary Neville with England team spirit remark
'I was so stressed the week before the All-Ireland and I ended up having a panic-attack' - O'Shea and O'Sullivan open up
Roy Keane takes moment on TV to pay tribute to his old team in Cork
Lionel Messi makes Gary Neville eat his words after "silk pyjamas" comment
The nine England World Cup footballers who could have played for Ireland
Roy Keane shoots down ITV presenter's 'excuse' for England's draw with USA
You may also like
1 day ago
Full player ratings as England are held to a goalless draw against USA
1 day ago
Japan fans explain why they clean up after World Cup matches
2 days ago
The SportsJOE Friday Pub Quiz: Week 2
2 days ago
World Cup 2022 Day Six: All the major action and talking points
2 days ago
Clairvoyant otter predicted Japan's World Cup win over Germany
2 days ago
Amancio Ortega interested in buying Man United from Glazers
Next Page