Game's gone soft if that's a red for Wayne Rooney

Only joking. It's a shit tackle. A shit tackle of the highest order. No chance of getting the ball. Studs up. Right on the ankle. A real leg breaker.

Glad Wayno's over there doing the Lord's work and showing those bloody yanks how to play footie.

Wayne Rooney produced an absolutely disgusting challenge in DC United's fixture against Los Angeles FC and was sent off for his trouble.

Remarkably, being without Wayne actually improved DC's defensive quality and they only shipped one more goal, having conceded three in the previous 52 minutes.

The game finished 4-0 to LAFC thanks to a Carlos Vela hat-trick.

A VAR review brought out the red from referee Robert Sibiga, clearly showing the full horror of Rooney's effort. 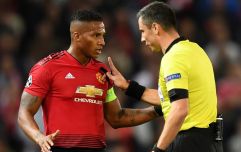 Antonio Valencia appears to confirm his next club on Twitter

END_OF_DOCUMENT_TOKEN_TO_BE_REPLACED

The slow-mo flex in the ankle made things worse. So much so that Wayne was already handing off the captain's armband before the ref produced a card.

Clearly a messy bitch who lives for drama, Sibiga initially pulled out a yellow before gesturing that he would not be awarding one and instead reaching for red.