Watford had to dig deep against Spurs after going behind to an unfortunate Abdoulaye Doucoure own goal, but fought back to win 2-1 and maintain their 100% start to the season.

The hosts’ two strikes both came from set-pieces, but according to Deeney the Hornets used their intuition rather than following Gracia’s directions from the training ground.

“The gaffer has got to take credit. He’s worked a lot on the set-pieces,” Deeney told BBC Match of the Day.

“Funnily enough, the two that he’s worked on we didn’t do. We just ignored him and went our own way and the ball fell for us. The players have got to take credit for that.

“If we had missed he would have hammered us!”

Along with Liverpool and Chelsea, Watford have won all of their opening four matches, beating Crystal Palace, Burnley and Brighton as well as Mauricio Pochettino’s side.

They face a tough test against Manchester United after the international break - in the 5.30pm kick-off on Saturday, September 15 - but Gracia is delighted by his team’s efforts so far. 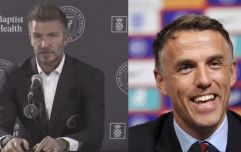 END_OF_DOCUMENT_TOKEN_TO_BE_REPLACED

"It has been an amazing start,” he said on Sunday. “We are in a good moment and trying to enjoy it, knowing we have won four games - but it is only four games."

The former Malaga boss, who took charge at Vicarage Road in January, also paid tribute to goalscorer Deeney after the game, adding: "He has a special personality.

“I've already seen and said many times he is very important on and off the pitch, today he showed that again but it is no surprise for me.”

"We're not gonna give Holebas too much credit - he moans too much." 👀#MOTD2 pic.twitter.com/aior1QfXz1


popular
Roy Keane story shows the power he had at Manchester United
McGregor admits shout from Dustin Poirier's corner got inside his head
McGregor's first words to Poirier after defeat show where the damage was done
Dustin Poirier annihilates Conor McGregor to earn stunning UFC 257 victory
Khabib Nurmagomedov reacts to Conor McGregor's shock UFC 257 loss
Jolie Poirier certainly let her voice be heard after her husband's win over McGregor
He'll be remembered as a footballer but Keith Higgins has always been a hurler
You may also like
2 days ago
Martin Odegaard inches towards shock Arsenal loan move
2 days ago
Jurgen Klopp blames himself as Liverpool fall to "impossible" defeat to Burnley
2 days ago
Manchester City suffer Kevin De Bruyne injury blow
3 days ago
Players involved in European Super League will be banned from international tournaments, says FIFA
3 days ago
Derby to appeal decision ordering them to pay Richard Keogh £2m in compensation
3 days ago
Fernando Torres has got absolutely jacked since retiring from football
Next Page