Wednesday nights will never be the same again.

Ronan O'Gara told us he was not a pundit, Andy Reid spoke about the premature end of his Ireland career under Giovanni Trapattoni, Dion Fanning gave us the journalist's-eye view of some of the biggest talking points in Irish sport and there was even an exclusive interview with Jürgen Klopp. 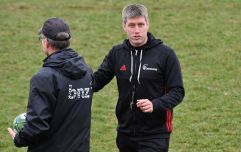 END_OF_DOCUMENT_TOKEN_TO_BE_REPLACED

Oh, and where else would you find Joe Brolly being interviewed by Joe Brolly?

SportsJOE Live sponsored by Screwfix.ie, presented by Colm 'Wooly' Parkinson, is SportsJOE's flagship show and was broadcast for the first time on Wednesday night.

With a level of insight and the kind of informal debate that you just don't get on television broadcast, SportsJOELive proved a massive hit with audiences across JOE's Facebook and Twitter channels.

Check out what all the fuss was about here, you won't regret it...


popular
Sean Dyche set to be named Everton manager after Marcelo Bielsa talks break down
Roy Keane flatly rejects longstanding perception of ex-Man United midfielder Paul Ince
Allianz National Football League Round 1: All the action and talking points
Roy Keane leaves ITV pundits in stitches after Pep Guardiola's pre-match interview
Conor McGregor hit by car ‘at full speed’ while cycling
Quiz: Identify these 15 football clubs that are not named after a place
"I don't like to fill my time that way" - O'Hora going his own way in an era of obsessives and covering all bases
You may also like
2 weeks ago
Ronan O'Gara on the Munster legend that tipped him off to Jack Crowley
2 months ago
Ronan O'Gara confirms he is on shortlist for England head coach job
2 months ago
Ronan O'Gara posts lovely Jack Crowley message after Cork youngster's Ireland debut
2 months ago
"Suddenly, up pops Ronan O'Gara" - How the European champions 'threw a lifeline' and saved a rugby career
3 months ago
"You throw a stone across the river, you're in Waterford, boy!" - Tadhg Furlong on growing up near Munster border
3 months ago
"Ronan O'Gara came in and said, 'On the 28th of May, we are winning the Champions Cup'"
Next Page