As we showed you last week, former Republic of Ireland footballer Kevin Kilbane is having a go at being a DJ. While we haven't yet gotten used to calling him "DJ Killa," this is something the 110-cap international has always wanted. 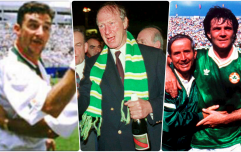 END_OF_DOCUMENT_TOKEN_TO_BE_REPLACED

Despite having absolutely no experience with mixing equipment or anything of the sort, he's taken to it like a duck to water. Now two weeks into his journey, he's sought the help of Andy Cato and Tom Findlay of Groove Armada.

Having been told he has 29 days to prepare for a live show with the duo, Kevin was understandably nervous. It's not every day you're told something like that, unless you're a seasoned pro like Andy and Tom.

Your first set doesn't always go to plan, so Andy had wise words for him. No matter how things are going, you've got to look confident.

"If things are not going particularly well, put your arm up like that and look totally confident and smile," Tom said.

Words to live by when you're chasing your boyhood dream.


popular
Roy Keane flew home from Qatar World Cup as 'fellow pundits were getting on his nerves'
World Cup 2022 Day 20: All the major action and talking points
Rory McIlroy explains 'falling out' with Shane Lowry that lasted a few years
Psychic lion predicts outcome of England vs France World Cup clash
Roy Keane reveals what he wrote about England during Senegal game
Talksport presenter puts Martin O'Neill to the pin of his collar over Declan Rice and Jack Grealish
World Cup Power Rankings: The top 10 players at the tournament ahead of the quarter-finals
You may also like
1 month ago
Taking on the Dublin City Marathon? Here are 4 top training tips to help you prepare for the run
1 month ago
Looking for healthcare on-the-go? This handy online prescription service could be the perfect solution
5 months ago
Join our ultimate sports quiz in Dublin for a chance to WIN a trip to a Premier League game
8 months ago
Join Munster legend Billy Holland for this free mortgage masterclass
10 months ago
[CLOSED] COMPETITION: WIN a two-night stay at the luxury Trident Hotel in Kinsale Harbour
11 months ago
Here's where you can find some incredible deals on exercise machines in 2022
Next Page