WATCH: Antonio Valencia sent off and sparks melee as Ecuador are eliminated from Copa America

What was he thinking?

Antonio Valencia knew he was on a yellow card when he made the bizarre decision to scythe down Alejandro Bedoya on the sideline during Thursday night's Copa America Centenario quarter-final between Ecuador and the U.S.A.

Valencia had already been booked in the 38th minute but clearly forgot all about that during half-time as he aggressively chopped at Bedoya's legs just minutes after the break.

The Manchester United man was understandably sent packing but not before a fracas broke out between both sets of players. 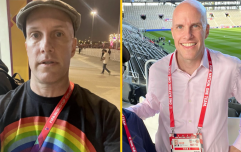 END_OF_DOCUMENT_TOKEN_TO_BE_REPLACED

U.S.A.'s Jermaine Jones quickly followed Valencia down the tunnel as he was shown a straight red for seemingly throwing a short punch to the chin of Michael Arroyo.

With both sides down to 10-men, the U.S.A. were able to hang on and take the game 2-1, guaranteeing them a place in the semi-finals against either Argentina or Venezuela in Houston next week.