VIDEO: Andriy Yarmolenko exchanges shirt with opponent but disrespectfully throws it away

Andriy Yarmolenko seems to be a bit of a sore loser.

The Ukrainian winger, who was a target of Everton and Chelsea before signing a new deal this week, played the full 90 of Dynamo Kiev's 3-0 home defeat to rivals Shakhtar Donetsk on Friday.

Being Kiev's superstar, players rushed to exchange jerseys with Yarmolenko and it was Shakhtar defender Taras Stepanenko who got the coveted shirt. 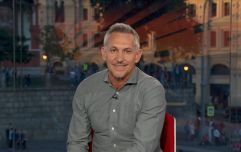 END_OF_DOCUMENT_TOKEN_TO_BE_REPLACED

But Yarmolenko clearly wasn't as bowled over with the trade as he disrespectfully discarded Stepanenko's jersey before leaving the pitch.

It may not seem like a big deal but we can only imagine Stepanenko's disappointment to see his shirt laying on the pitch after he had handed it to one of his idols.


popular
Six GAA games shown on TV this weekend that you do not want to miss
Andy Moran reveals which former Mayo teammate was the ultimate team player
Paul Galvin is not one bit impressed with the new Kerry jersey
"It’s hard not to respect Johnny, even if you don’t like him!" - Dan Biggar
QUIZ: Which is the correct GAA crest?
Craig Dias on club All-Ireland run, winning Leinster, and making his second debut for Dublin a decade after his first
Ireland Under-17 defender Cathal Heffernan 'in talks' with AC Milan
You may also like
6 months ago
South Korean TV apologise for using Chernobyl image for Ukraine during Olympic ceremony
7 months ago
North Macedonia's bizarre training drill with cones has some fans scratching their heads
7 months ago
EURO 2020 QUIZ: GROUP C
3 years ago
Croatia sack assistant ahead of World Cup semi-final with England
5 years ago
The complicated permutations for Group C explained
5 years ago
Northern Ireland fan dies in stand during Ukraine victory
Next Page