'I will stand firmly and fight for my people, for my country and for democracy'

Former Arsenal defender Oleh Luzhnyi has put his coaching career on hold in order to fight for his country following Russia's invasion of Ukraine. He has been joined in that fight by boxer Vasyl Lomachenko.

'Loma' is a two-time Olympic gold medallist and a former world champion across three weight classes. Still only 34, Lomachenko has put his boxing career on hold to join the Bilhorod-Dnistrovsky Terror Defence Battalion in his hometown.

The boxing superstar was pictured with an M16 rifle by his side, back in Bilhorod-Dnistrovsky, and fellow boxer Carl Frampton declared him a hero and legend.

'I will stand firmly and fight for my people' 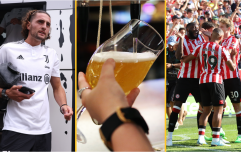 END_OF_DOCUMENT_TOKEN_TO_BE_REPLACED

Oleh Luzhnyi hung up his football boots 17 years ago, but he is picking up arms to fight off the Russian invasion of his country.

The 53-year-old Ukrainian, who made 60 international appearances during his career, signed for Arsenal in 1999 after impressing for Dynamo Kyiv in the Champions League against the Gunners. Luzhnyi made 109 appearances for the north London outfit, with his last game coming in the 2003 FA Cup final win over Southampton in place of Sol Campbell.

Following a stint with Wolves, the defender retired and began his coaching career - spending time as an assistant and interim manager at Dynamo Kyiv.

END_OF_DOCUMENT_TOKEN_TO_BE_REPLACED

However, Luzhnyi has now put his role as a coach on hold after returning to Ukraine to fight for his country, which comes after the 'horrific' scenes caused by Russian president Vladimir Putin's decision to invade Ukraine earlier this week.

Speaking to Sky Sports, he said: "I want to come to coach in the UK but before anything I will stand firmly and fight for my people, for my country and for democracy.

"We all hope this will be over soon as innocent lives are being lost and families are being torn apart. A country being invaded and destroyed is all for what?

"We need to stand together as one and bring to an end this criminal warfare."

Luzhnyi because the first Ukrainian to win a Premier League title following his triumph with Arsenal, and has since been followed by Manchester City's Oleksandr Zinchenko.

The City man came face-to-face with his compatriot, Vitalii Mykolenko, this weekend, with Pep Guardiola's side securing a narrow 1-0 win over Everton in an emotional match at Goodison Park on Saturday.

Both Zinchenko and Mykolenko were moved to tears ahead of the match, as the importance of football was once again put sharply into perspective.


popular
"This game is going to get abandoned" - Mass brawl between Kilcoo and Burren results in six red cards
"He'll have the best seat in the house" - emotional Mageean pays tribute to late great Kiernan after the race of her life
Teddy Sheringham says Roy Keane didn't speak to him for three years at Man United
Quiz: Which player has scored more goals for Ireland?
Court hears cringeworthy poems Ryan Giggs wrote to his ex
Kylian Mbappé wants to 'dismantle Argentine Republic' at PSG
Your guide to a huge weekend of sport and how to watch it all
You may also like
3 days ago
Antonio Conte reportedly told Thomas Tuchel to 'f**k off' multiple times before bust-up
3 days ago
Man United now open to selling Cristiano Ronaldo this transfer window
4 days ago
Carragher and Neville brutally name Man United's biggest transfer flops since 2013
4 days ago
"There's a hole in the ceiling, about three-foot round" - Andy Townsend on life as Gazza's housemate
4 days ago
"Save it for the game!" - Owen Hargreaves on Man United fight before Champions League victory over Chelsea
5 days ago
Thomas Tuchel explains what sparked hand-shake scenes with Antonio Conte
Next Page