Usain Bolt, like it or lump it, is a footballer now.

Sure, the fastest man in the world is just on trial, so he has not received a contract yet. But he trains with the Central Coast Mariners and plays in some games, so he's certainly more of a footballer than most of us.

As you know, footballers tend to feature in football games, including the popular video game FIFA 19. 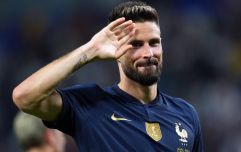 END_OF_DOCUMENT_TOKEN_TO_BE_REPLACED

Now while it may seem incredibly fanciful that Usain Bolt - fastest man in the world and Olympic gold medalist - could actually feature in FIFA, it is not fanciful at all according to the makers of the game EA Sports Canada.

Speaking to FOX Sports Asia, a member of EA's team admitted as such: "If Usain is picked up by the Central Coast Mariners then he will automatically be included in the winter update or the next major update. But if he isn't listed then he might be included as a free agent.

"Yes, he will also be the fastest player in the game," they added, presumably while chuckling to themselves.

Exactly how good Bolt will be remains to be seen. He did score two goals on his first start for the Mariners recently. But the majority of his displays have illustrated how far he has to go to reach the required level, with his touch, positioning and decision-making, particularly below par. 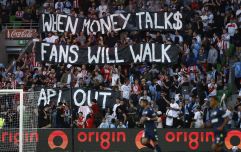 END_OF_DOCUMENT_TOKEN_TO_BE_REPLACED

It has been reported that Bolt's FIFA 19 FUT card was leaked, displaying speed of 99 with an overall rating of 49 so, yeah, not great.

This Usain Bolt FIFA 19 card has been 'leaked' 🎮 pic.twitter.com/i6ugzfWRyG


popular
Ireland team to play Wales: Andy Farrell's XV, the big calls and bold cuts
Jaden Sancho can't hide his smile as Old Trafford give heartwarming reception
Everton release brutal 59-word statement to confirm Anthony Gordon departure
"Every team did it!" - Paul O'Connell on Roy Keane comment to Ronan O'Gara that he couldn't deny
Owen Farrell praises Johnny Sexton in revealing interview ahead of Six Nations
Discontent over Netflix access for Six Nations documentary as Johnny Sexton focuses on his Last Dance
"It's crazy to think Bundee Aki might come straight in and start against Wales"
You may also like
2 months ago
Bundee Aki reminded us all of his best qualities, on a night Ireland couldn't do without him
2 months ago
Matt Williams slammed for post-match take on Nic White being able to play on after head blow
2 months ago
"It's testament to the guy himself" - Peter O'Mahony pays tribute to Michael Hooper after mental health break
2 months ago
Andy Farrell names final Ireland team of the year, with Wallabies bringing big guns
2 months ago
"It was a joy to watch" - Jamie Heaslip on his stand-out Ireland vs. Australia moments
2 months ago
The no-messing-about Ireland team Andy Farrell should start against Australia
Next Page