The Republic of Ireland drew 1-1 away to Ukraine in their final Uefa Nations League game of the month.

Ireland took the lead in the Polish city of Lodz through an incredible goal from Nathan Collins in the first half. Ukraine, however, equalised after half-time through Artem Dovbyk.

Here is how we rated the Ireland players. 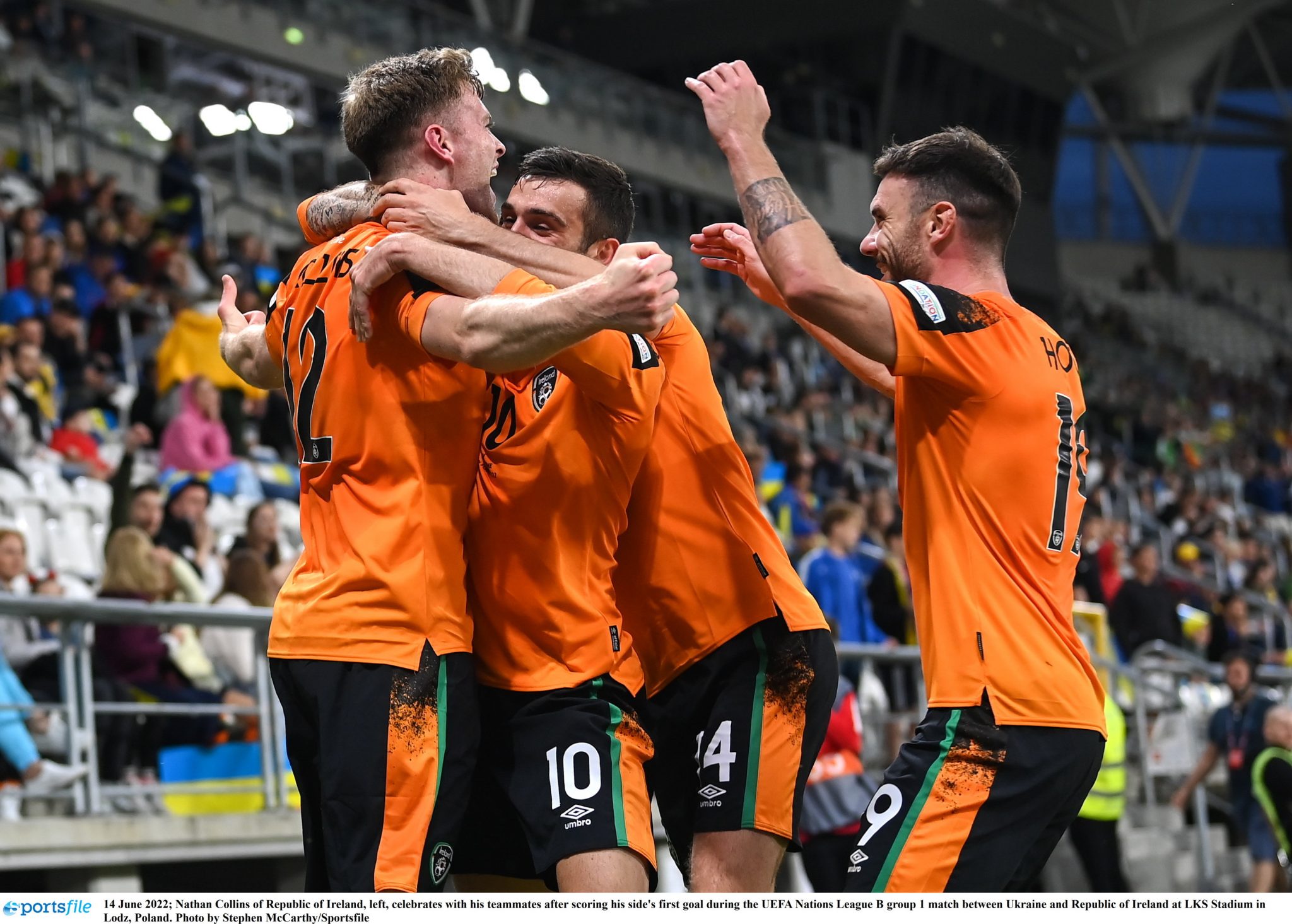 END_OF_DOCUMENT_TOKEN_TO_BE_REPLACED

After recording a clean sheet against Scotland, the Liverpool goalkeeper kept his place in the starting XI to earn his seventh cap and was busy in the first half.

Kelleher made some important saves to keep the score down and was a calm presence behind Ireland's defence. He was also assured in possession, comfortable playing short or long passes.

It is no exaggeration to say that Collins scored one of the best Ireland goals of recent memory in the first half.

The Burnley central defender won the ball in Ukraine's half and dribbled around four opposition players before slotting the ball beyond the goalkeeper with the outside of his boot. 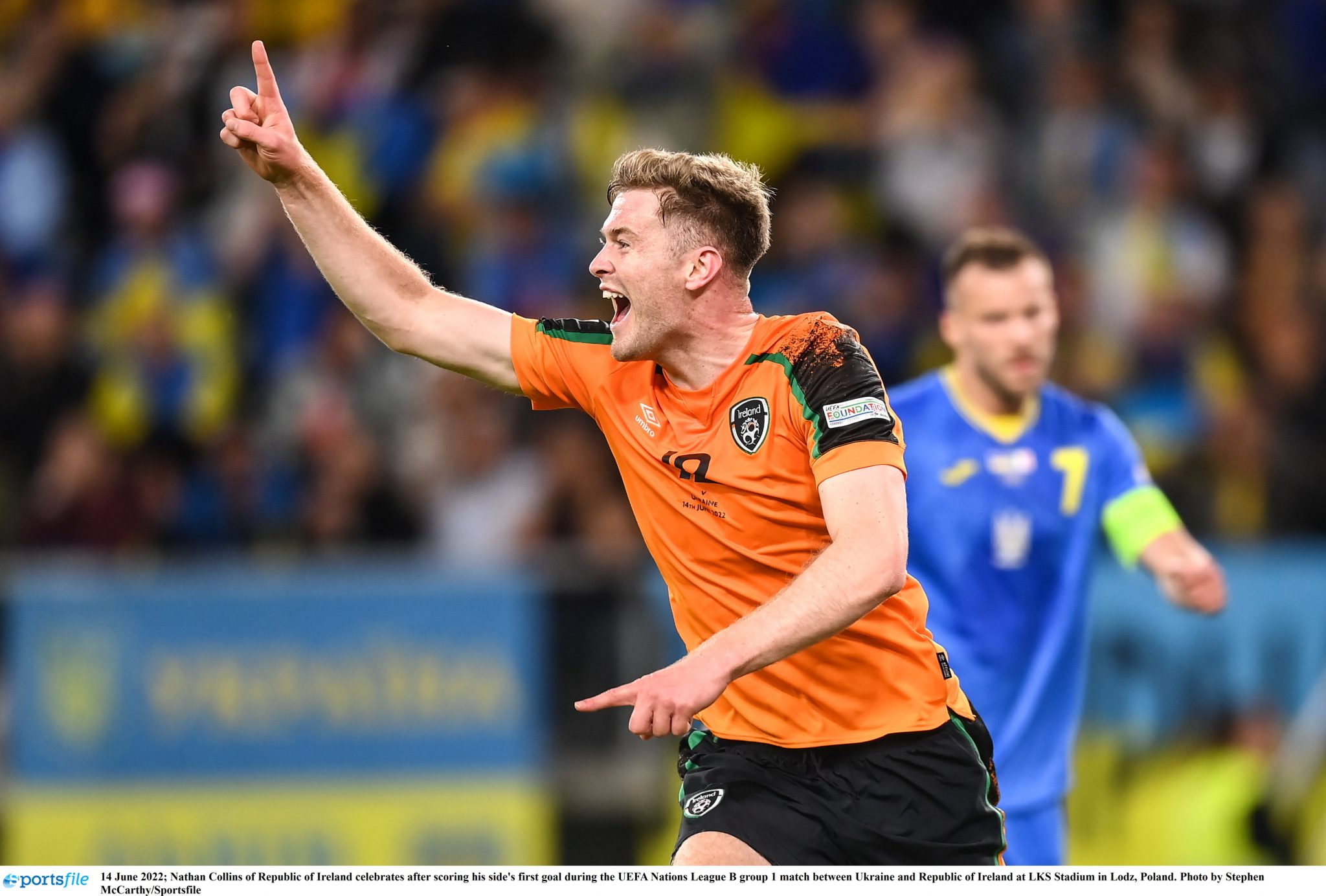 END_OF_DOCUMENT_TOKEN_TO_BE_REPLACED

It would have been impressive for any Ireland player to score such a stunning goal, never mind a 21-year-old central defender earning just his seventh cap.

Beyond his wonderful solo goal, Collins was excellent and showed why he has cemented his place as a first-choice defender under Kenny.

The Leixlip-native, 21, was aggressive and proactive, winning the ball back on several occasions and helping Ireland's defence keep Ukraine at bay.

Lenihan, making his first appearance for the national team since 2018, came into the team to earn his third cap. The Blackburn Rovers defender started in the absence of Shane Duffy, who was suspended for the game, and John Egan, who was unavailable due to family reasons.

Lenihan didn't look out of place and helped Ireland stem Ukraine's attacks, winning his fair share of aerial challenges. Like the rest of the Irish defence, however, he might have done more to prevent Ukraine's goal, but it was a strong performance in a difficult game.

O'Shea earned his 13th cap. The West Brom defender was solid at the back and comfortable in possession.

Browne scored against Scotland playing as a right wing-back, and he also kept their best player, Andy Robertson, quiet in an impressive performance.

The Preston North End midfielder mostly kept Vitaliy Mykolenko quiet on Wednesday night but was a little loose in possession. 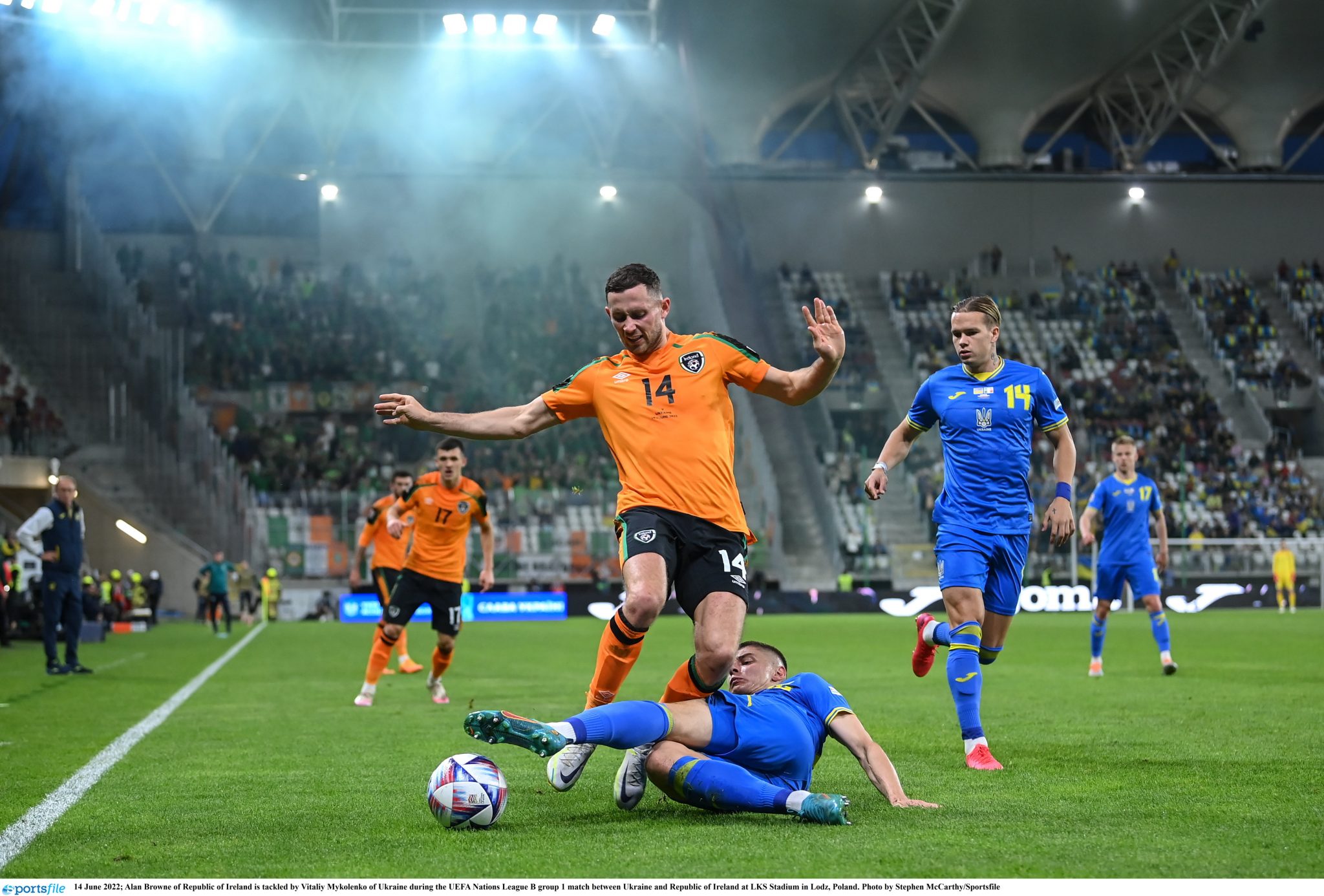 McClean, earning his 94th cap, captained Ireland at the night. However, the Wigan Athletic winger was partly at fault for Ukraine's equaliser, even if none of Ireland's defence can escape blame for the goal.

The Ireland skipper didn't spot Andriy Yarmolenko in space over his shoulder just after half-time. McClean raced back and stopped Yarmolenko's advance, but failed to cut out the cross which landed with Artem Dovbyk to tap home.

McClean, however, worked hard throughout a tough game for Stephen Kenny's team.

Cullen started his 15th consecutive game for Ireland and has become the first name on the teamsheet under Kenny.

The Anderlecht midfielder was tidy in possession and kept play ticking over with his accurate passes. He was also solid when Ireland didn't have the ball, winning possession back and throwing himself into tackles.

Cullen was also full of energy and kept going until the final whistle, an impressive feat given it was his fourth match for Ireland in 11 days. 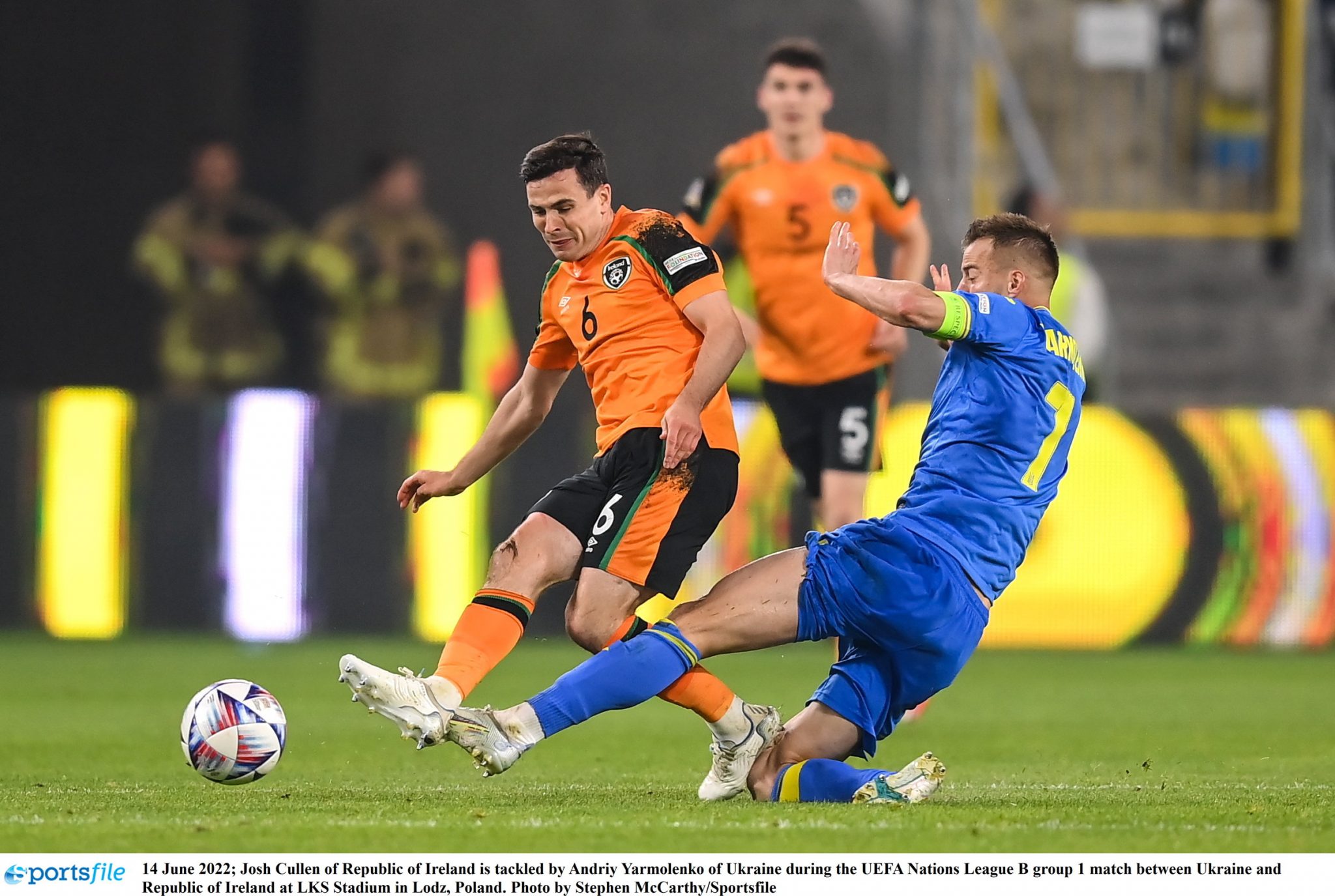 Molumby was one of the main reasons for Ireland's improved performance against Scotland. The West Brom midfielder brought the bite and energy that had been missing from the defeats to Ukraine and Armenia.

He carried that performance into Wednesday's match, helping Ireland's midfield contents an intense, hard-fought contest against the Ukraine midfield. Molumby was also calm on the ball and didn't waste possession.

Knight played as Ireland's most advanced midfielder and set up Troy Parrott with a brilliant lofted cross to the back post in the first half, only for the striker to miss.

Knight was impressive without the ball and dropped into midfield when Ireland didn't have possession.

After a stellar performance against Scotland, in which he scored and recorded an assist, it was no surprise to see Parrott retain his starting place in the team.

The striker, however, couldn't replicate his performance. Parrott should have scored his fifth goal for Ireland in the first half when he had a free header in the Ukraine penalty area. He appeared to have enough time to take a shot but opted to attack the ball with his head.

Parrott, however, worked hard up front and might have found the net on another night. 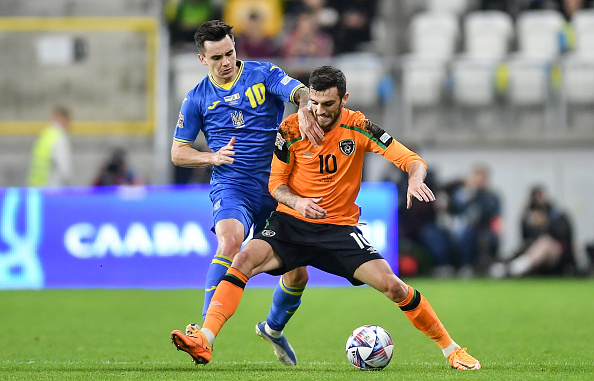 Hogan was a surprise inclusion ahead of Chiedozie Ogbene but he was largely on the edge of the game. The striker found it difficult to get involved and was replaced by Callum Robinson after 57 minutes.

The West Brom forward was an improvement on Hogan and showed signs of linking up well with Parrott.

The pair added fresh legs to Ireland's midfield as the game became stretched.

Not on long enough to be rated.


popular
Kilmacud Crokes to counter Glen's objection over extra players in All-Ireland final
"He's a serious specimen, 6 ft 3 as well, so he's an incredible athlete" - Geaney hails O'Connor's impact
"It's very clear how I felt about it. I had a very definite view on it" - McEntee on Dunboyne's 2005 semi-final saga
January transfer window 2023: Follow the latest updates live in our hub
Roy Keane on Man United's two most improved players since Ronaldo left
"He didn't give me that jersey back!" - Johnny Sexton on new rival Jack Crowley
The two toughest calls in Ireland team to face Wales are in the backline
You may also like
1 month ago
Roy Keane cracks ice cold Ireland joke after France lose World Cup final to Argentina
1 month ago
Ireland reportedly line up Lee Carsley as next national team manager
1 month ago
Talksport presenter puts Martin O'Neill to the pin of his collar over Declan Rice and Jack Grealish
1 month ago
UEFA fine FAI €20,000 for Ireland dressing room song
1 month ago
The 10 England World Cup footballers who could have played for Ireland
1 month ago
Shay Given on how far Ireland could've gone at the 2002 World Cup with Roy Keane in the team
Next Page