Uefa to launch its own football streaming platform

This could be the first of many.

Uefa is set to launch its own streaming platform for the start of the 2019/20 season. After its initial launch, the 'Over The Top' platform will be available outside Europe and North America, with the Champions League unlikely to be available on the platform until 2021 due to broadcasting contracts currently in place.

Uefa's president Aleksandar Ceferin was re-elected unopposed on Thursday morning, and is behind the plans to launch 'Uefa TV' around the world. 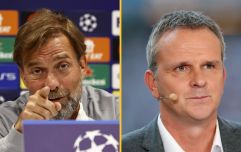 END_OF_DOCUMENT_TOKEN_TO_BE_REPLACED

This move could signal a significant shift in how sport is broadcast around the globe, as the Netflixisation of football gathers momentum.

Other sporting organisations have similar structures in place, such as the NFL's Game Pass app, UFC Fight Pass, and Eleven Sports, which broadcast LaLiga and Serie A games to a UK audience this season.

Uefa TV is expected to target 'higher growth territories' in its early days, showing just minor European competitions such as the Europa League.

A third tier European competition, the Europa League 2, is set to be introduced in 2021, which could be available to watch exclusively via Uefa TV.


popular
World Cup 2022 Day Ten: All the major action and talking points
Iran demand action by FIFA after USA team change flag on social media
"I have equal love for football and hurling" - Sheehy set for two Leinster finals in two hours
World Cup 2022 Day Nine: All the major action and talking points
For Ballyea, this journey all started out in a purple Toyota Corolla
"I appreciate Moycullen now more than ever" - Cooke's American lifestyle from a Moycullen base
GAA JOE Team of the weekend
You may also like
2 months ago
UEFA reportedly pre-planned statement blaming fans for Champions League Final delays
2 months ago
Napoli hammer Liverpool in opening Champions League group game
3 months ago
The Champions League group stage draw has been made
5 months ago
Richard Keys takes aim at Gary Neville for BT Sport comments
5 months ago
Didi Hamman says Thiago is 'one of the most overrated players in European football'
5 months ago
French Sports Minister claims '30-40,000 fans had fake tickets' for Champions League final
Next Page