Toni Kroos has been around many corners and, in his time as a professional footballer, he's played in many great games.

And at 32-years of age, he's played in many big stadiums and on many momentous occasions, but even after all those years, he's rarely experienced anything like Celtic Park on Tuesday night.

Crazy was the word the German used to describe the atmosphere after the game. The place was bouncing.

END_OF_DOCUMENT_TOKEN_TO_BE_REPLACED

There's no denying that the Celtic fans put on a show but it wasn't just the noise or the colour or the enthusiasm that blew the German away, it was the respect.

"That's what we were expecting," he told Bein Sports after Madrid's 3-0 win.

"That they would come out with this amazing atmosphere, even for us to be honest!

"Because they are not negative to their rivals, they are just supporting their team...The mentality of these people who accept their rivals, it's a spectacular atmosphere."

"Of course, we knew we had to calm the crowd down a bit," Kroos added. 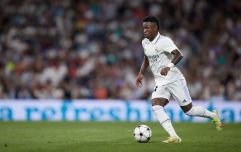 END_OF_DOCUMENT_TOKEN_TO_BE_REPLACED

"We didn't expect an easy game, it's a good team here at home. They've beaten the Europa League finalist 4-0.

"We knew the team were going to attack from the first minute and they did.

"So more or less, you have to survive the first 20/25 minutes, knowing that the game will calm down a bit. That's how we won it."

Tony Kroos impressed by the atmosphere: 'They're not negative to their opponents, they just supporting their team. The atmosphere was great.' pic.twitter.com/OyyBega0cy

Indeed, Celtic were the livelier team in the earlier stage and it was a case of what might have been when Callum McGregor clipped the post in the first half. With his pace and trickery, Reo Hatate also asked plenty of questions of Carlo Ancelotti's side in that first half but the European champions showed their class after the break.

An other-worldly through ball from Federico Valverde set-up the speedy Vinicius Jr to break the resistance and from there, Madrid looked a class apart. Modric put them two up with a trademark outside of the boot poke before Eden Hazard got in on the act late on.

That noise is frightening 😮‍💨🤩🍀 pic.twitter.com/Ox2s63DfxG