Cristiano Ronaldo is much more than an elite-level athlete.

Ronaldo has established himself as a standalone brand while simultaneously establishing himself as one of the greatest footballers of all time.

Nobody works harder than the Portugal captain on the training ground but Ronaldo is also famously business-savvy.

END_OF_DOCUMENT_TOKEN_TO_BE_REPLACED

Everything from his haircuts to his goal celebrations are well thought out in advance by the Real Madrid superstar to make himself as marketable as possible.

Ronaldo is well aware of the fact that viewers' focus lies solely on him when he sets the ball down for free-kicks for both club and country.

And, according to former coach Mike Phelan, the reason behind Ronaldo's signature wide stance prior to striking free-kicks is solely for marketing reasons, rather than anything technical.

Phelan, who coached Ronaldo at Manchester United, has explained the thinking behind the reigning Ballon d'Or holder's distinctive free-kick preparation.

"People used to put the ball down, walk away, run up and hit it. He brought in a more dynamic showmanship," Phelan told the Daily Mail.

"He places the ball down, the concentration level is high, he takes his certain amount of steps back so that his standing foot is in the perfect place to hit the ball in the sweet spot. 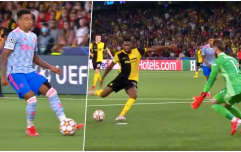 END_OF_DOCUMENT_TOKEN_TO_BE_REPLACED

"He is the ultimate showman. He has that slight arrogance. When he pulls those shorts up and shows his thighs, he is saying 'All eyes on me' and this is going in.

"He understands the marketing side of it. The way he struts up and places it; the world is watching him."


popular
Galway fans' frosty reception for Davy Fitz doesn't make any sense
The most Stone Age tackle you've ever seen gets South African lock straight red card
'Brian was a genius... he would've killed you to even win a game of touch'
Ryan Manning hacked to the ground by Henri Lansbury in ruthless assault
"Johnno went, 'We’re not moving! You're trying to mess us about!'" - Ben Kay recalls red carpet controversy
"Some of the generals wanted me executed" - Irish rugby legend on flag caper that went wrong
"20 seconds of lunacy" sees Joao Felix red-carded against Athletic Bilbao
You may also like
4 days ago
'Riled' Ronaldo sent Rio Ferdinand Whatsapp during on-air Mbappe-Haaland debate
4 days ago
Jamie Carragher and Gary Lineker in Twitter spat over Lionel Messi mistake
4 days ago
Jamie Carragher asked some pertinent questions about Ronaldo's United return
4 days ago
Gary Neville and Jamie Carragher finally have the Ronaldo vs Messi debate
5 days ago
Giorgio Chiellini aims Paul Dybala dig at Cristiano Ronaldo
1 week ago
No, Ronaldo's return is not justification to end English football's 3pm blackout
Next Page