Prime Minister Theresa May says a bid for the 2030 World Cup would have her government's "full support."

A joint bid from the UK and Ireland by the Football Associations of England, Scotland, Wales, Northern Ireland and Ireland is being considered, the Prime Minister said. 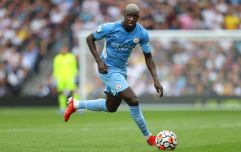 END_OF_DOCUMENT_TOKEN_TO_BE_REPLACED

London and Glasgow will host 11 fixtures in 2020's UEFA European Championships, with a semi and the final being played at Wembley.

Theresa May said: "The decision on whether to bid is, of course, for the football associations to make.

"But if they decide to go forward they can count on this government's full support."

He said: "I'm delighted that the prime minister has followed Labour's lead.

"This summer's World Cup and the performance of England inspired the nation.

In Russia 2018, England had their best run at a tournament for most in living memory. Placing fourth after a losing 2-0 to Belgium in the third place play off.