Without goals, football matches would not be anywhere near as good as they are. Goals make the game exciting. All kinds of goals are good, even if they are absolutely atrocious or very lucky, but every football fan - almost universally - prefers goals which are absolute stunners.

Stunners are hard to come by for most teams and - without the benefit of any particular stats on the subject - one can safely assume that less than one percent of an average team's goals are really aesthetically pleasing. 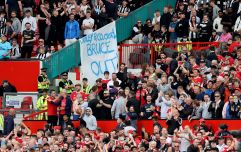 END_OF_DOCUMENT_TOKEN_TO_BE_REPLACED

That percentage is likely much higher for Championship side Sheffield Wednesday, who appear to have score an inordinate amount of stunning goals during the 2018/19 season.

This is evidenced by their goal of the season competition, which the club announced on their Twitter account early on Friday.

Long range stunner after long range stunner, it's an absolute delight to watch. So even if you don't plan on voting, do yourself a favour and spend a few minutes watching them all.

⚠️ WARNING! Some serious screamers in this collection!

Vote for your Goal of the Season here 👉 https://t.co/MWEuAhsQm6 #swfc pic.twitter.com/cWswyNEQAu


popular
Rob Kearney taught a classic GAA lesson when he tried to have the craic in second game back
Ex-Down boss Paddy Tally will be part of Jack O'Connor's staff if he's offered the Kerry job
Shane Lowry had no problem setting reporters straight at Ryder Cup briefing
GAA could learn a thing or two from AFL's parade and self-promotion
The scenes in Newbridge as the biggest hit and hope ever knocks Moorefield out
Meath superstar named player of the month after sensational final performance
Galway fans' frosty reception for Davy Fitz doesn't make any sense
You may also like
1 day ago
Solskjaer claims 'lucky' Mark Noble benefitted from penalty call
1 day ago
Betting companies set to be banned from football shirt sponsor deals
1 day ago
'Solskjaer has started the new season the same, so why would you expect a different result?"
1 day ago
Premier League clubs agree on calendar ahead of 2022 World Cup
2 days ago
Pep Guardiola renews calls for U23 sides in lower leagues after win over Wycombe Wanderers
3 days ago
Cristiano Ronaldo reportedly rejected by Atletico before sealing Man United return
Next Page